Hi everyone! Here’s my homily for the Third Sunday in Ordinary Time – January 22, 2017. The readings for today can be found at: http://usccb.org/bible/readings/012217.cfm. Thanks as always for reading, sharing it on Facebook, Twitter and Reddit and your feedback and comments. Grateful for your interest and support! Fr Jim 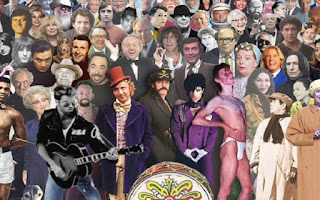 As 2016 was coming to a close, there was a great number of people who seemed to believe that there had been a greater than normal number of celebrity’s who passed away during the year. The UK newspaper “The Telegraph” did a whole article on the topic asking on behalf of many, “was 2016 cursed” for celebrities. They went through a whole slew of theories explaining why it seemed that way: Maybe the bar for celebrity has been dropped so low that there were more people considered celebs than before; perhaps with social media it has just amplified these losses when they occur more loudly; or maybe celebrities were simply cursed this past year .

One of the reasons I think people felt that 2016 was a bad year for celebrities was there were so many shocking and dramatic losses – from Carrie Fischer dying and then her mother Debbie Reynolds passing away the next day; we had musical icons Prince dying at the age of 57 back in April to 53 year old George Michael dying right on Christmas Day.

While there was a lot of contributing factors and medical reasons for many of these individuals deaths – what surprised me with so much of the coverage was how matter-of-factly there would be reports or interviews how this person had struggled with “demons” – in some cases how drug and alcohol abuse was known… In a celebrity obsessed culture, we’re kind of numbed to these sad stories and the tabloids and tabloid TV show seems to feed off these tragic deaths of celebrities.  In the last few weeks, they started going over George Michael’s toxicology reports and details of his personal life were made public and picked apart and hearing stories how friends had “warned him;” how co-workeres had been “concerned about him” and now there’s been speculation that he died of some drug overdose rather than a heart attack as had initially been reported.

This isn’t about bashing the media – or celebrities. It’s about people who walk in darkness. Because what makes some of these celebrity deaths even sadder is the lack of shock from so many people who knew them. People knew something was wrong. People could tell they were on a bad path. People saw they were walking in darkness. 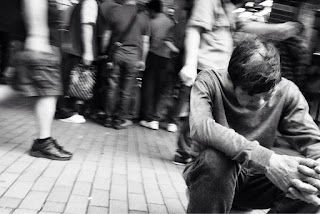 Do we care? We should. And I’m not saying to go run to your favorite celebrities home tonight and hold an intervention for them. Probably not a good idea with those armed guards and all. But who do we know that is walking in darkness? Don’t we know friends, roommates, classmates, family members who are on paths of destruction? Who isn’t acting right? Who is it that is making some awful choices and stupid decisions that will have a lasting impact on the rest of their lives, that we don’t say anything about because we’re being “polite.” Telling ourselves, well it’s their decision, it’s their choice, who am I to say and all the other excuses we have?

There are some people that God has placed into our lives right now – they are people that you and I are thinking of right now that are waiting for something- that need Jesus – that need His Light -.. And we pray for them, and we wonder what’s going to happen and we hope things will work out for them – and.   .   . that’s not enough.

In the Gospel today, Jesus enters Galilee – and St. Matthew quotes the first reading from Isaiah tonight with all those funky town names to show it was Galilee where Jesus starts his Mission. Jesus goes to this land that had been overwhelmed by darkness. This region had been raped, pillaged and plundered by these people the Assyrians, and Isaiah says to them in the first reading- you – people who walked in darkness- have seen a great light – upon those who dwelt in the land of gloom – a light has shone…

And Matthew quotes that passage to point out to them that Isaiah was talking about JESUS.

Jesus is that light that calls people out of darkness. We nod our heads and say, “Yes, Jesus is the Light of the World” we’ve heard this before –

Jesus is the way out of the darkness -yep, all of this was covered in CCD or Catholic School…

BUT How?
Jesus tells us in today’s Gospel: “Come after me and I will make YOU fishers of men.”

That’s not just a story about 4 fishermen over 2,000 years ago. Jesus is saying to you and to me – to each of us “Come after me and I will make YOU fishers of men”

– It’s not enough for us to receive that Light as we hear his word and receive his body and blood – Jesus gives us the Light and wants us to bring it to those who’ve yet to experience it – those who are in darkness.

When we look at what happened with the guys in the Gospel: Jesus comes on the scene, Peter and Andrew leave their nets (leave their livelihood) and follow him… James and John they’re father’s probably sitting in the boat thinking – Uh, Guys, where you going? The point is – in this encounter they had with Jesus; in the invitation he gives to them – they were able to recognize that there was something special in this —  in Him — that would change their lives forever. And so they spend the rest of their lives living and spreading the Light of Jesus. 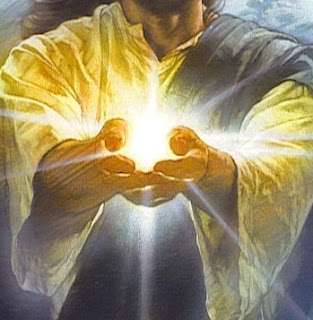 Do we? Do we really believe that? Because if we do then we have to do two things – 1 – we have to actually Live like people of the Light. That means when we’re hit with darkness in our own lives – whether it’s something bad I’ve done that is hanging over me – or – some circumstance I’m struggling with or even something that someone else has done to me and I’m holding onto the hurt, the anger and the resentment…  for those of us already here – we’ve gotta do something about this darkness in our own lives. Maybe I’ve got to get to confession – Maybe I need to deal with the pain or fear that I’m struggling with – Maybe I’ve got to pray for a way to forgive that person that hurt me… Maybe all of the above. For us who’ve already experienced the light of Christ; when that light seems diminished, it’s up to us to start to turn away from the darkness in my own life, or ask for help in doing that – to experience the healing, the peace and the Love that comes from turning towards the light.

The second thing is – I have to spread that Light of Jesus. I can’t wait for someone else to do it. There were probably people we passed on our way here tonight that we could have invited to be with us – not all of them would have come, but someone would have – someone was waiting for an invitation. Someone is still waiting for our invitation. There are probably people we’re going to be around later tonight who are just going to ask “what’d you do tonight?” are we going to answer “nothing” because we’re embarrassed to tell them that coming to Mass is important to us or are we going to say I came to Mass – and maybe that will open their hearts and minds to the Light. We don’t have to be overly dramatic and creepy about it getting into people’s faces and awkwardly and uncomfortably talking about Jesus. Rather, As we reveal ourselves and extend ourselves to others in simple, gentle, loving – but authentic ways – we can simply offer Christ’s friendship through our friendship… offer Christ’s care and concern through our care and concern… offer Christ’s Love through our Love.

So many different celebrity’s death story’s are sadder because it seems no one was able to truly show him the Light while they knew they were wallowing and being swallowed up in darkness. We don’t know how God wants to use us to spread his Light, and that’s not even something what we need to focus on or worry about. Jesus doesn’t say “Try to figure it all out on your own how to make my name known,” he says “Follow Me, I will make you fishers of men.” He’ll figure out how best to utilize our willingness to follow Him and serve Him – if we are willing too let Him.