Latest News
Home /Blog/WHERE IS THAT PEACE ON EARTH?

MERRY CHRISTMAS!  Here’s my homily for THE NATIVITY OF THE LORD – CHRISTMAS DAY – December 25, 2016.  The readings for today come from the “Mass during the Night” http://www.usccb.org/bible/readings/122516-midnight.cfm.  As always, thank you for stopping by to read this blog; for sharing it on Facebook, Twitter and Reddit; and for your feedback and comments.  They’re always appreciated!  My prayers and best wishes to you and yours for a blessed Christmas – Fr Jim 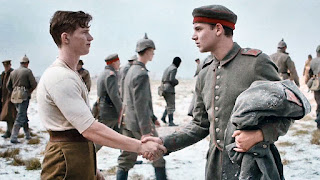 A couple years ago, there was a Christmas advertisement by a British supermarket company (that doubtfully many of us Americans have ever heard of) named Sainsbury’s in which they commemorated an event that happened 100 years ago during World War I. In the 3 minute commercial, they dramatically portrayed the true story of how at the height of battle, there was, what has been referred to as “The Christmas Truce.” British and German soldiers from Christmas Eve through Christmas Day had a cease-fire. There would be no warfare – lest anyone would got hurt or killed on Christmas, a holiday all of these soldiers from different nations, different “sides” celebrated.

The commercial shows the soldiers receiving care packages from home – how the strains of “Silent Night” could be heard first being sung by the German Soldiers, which when the British Soldiers heard, they responded, picking up the familiar Christmas hymn in their own language. Eventually both sides slowly emerged from their trenches, began to greet one another, share some of the gifts they had received from home with one another, even enter into a game of football. The beautiful advertisement ends with the words “Christmas is for sharing” on the screen with the company logo. (If you want to see it, you can click here: https://www.youtube.com/watch?v=NWF2JBb1bvM )

But that’s really not the end of the story. As soon as Christmas, ended, so did the truce. A shot fired from one side to the other. The fighting resumed. The first world war would continue for another 4 years with over 37 million people killed. No wonder the marketing agency that made the commercial wanted to delete that part. Sadly history cannot.

Hearing the story of the “Christmas Truce” – seems to be met with two types of reactions. The optimist sees the glimmer of humanity, the glimmer of hope that for a moment “Christmas” won. In the midst of the madness, the cruelty that is war, Christmas won the hearts and minds of enemies; Christmas circumvented the politics, the angry rhetoric, the extremism that marched people from opposite sides to take up arms one against one another. Christmas was able to evoke a truce, even if the government leaders and officials of the warring factions refused to declare one.

The pessimist sees this as simply postponing the inevitable for just the day. A nice sentiment, but what’s the point? So one Christian can kill another Christian – except on Christmas? Why, was it out of guilt? Is it just another example of Christian hypocrisy?

I first heard this story maybe 22 years ago – and I found myself very conflicted about it. Debating in my own mind and heart those two views – the optimist versus the pessimist and not sure which side I agreed with. On the one hand it’s so idealistic and hope-filled for just a moment, just a second that these grown men, these soldiers could become so peace-filled. But knowing the reality of things – that soon after they resumed where they left off, it’s so harsh, discouraging, frustrating, defeatist even. 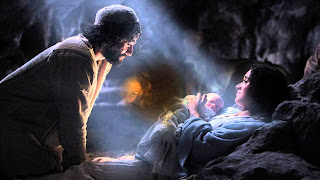 But something struck me when I saw the commercial and thought about the story again and the mix of emotions. Don’t a lot of us find ourselves similarly torn with those optimist versus pessimist views as we gather together once again for Christmas? We gather in Churches – familiar, peaceful, safe surroundings filled with sentiments of glad, good tidings – the beauty of music, artful decorations, peaceful depictions of the Son of God – Jesus Christ being born as a baby under the loving glances of his Mother, the blessed Virgin Mary, St. Joseph, the angels, the shepherds, the animals. It’s all so familiar, so hope-filled.

Yet we know as we leave this place, the world is far more harsh and discouraging. From terrorist acts disrupting Christmas celebrations in Germany to the ongoing horrors and violence in Syria are just two major international headlines that comes to mind. But it’s not hard to find words and actions of hate, anger, terror in our own borders. More closer to home – in our homes, whether it’s the unresolved dispute, the tension in the family, the illness that’s causing fear and anxiety; the loss of someone we love that has left an empty seat at our tables – many of us find sentiments resounding “Joy to the world” and “peace on earth” hard to believe in. We have good reason to think, to believe that Christmas seems to only win for a moment.


Yet, we find ourselves here again. Perhaps with a flicker of new hope that somehow, someway this cycle will finally be broken this time, this Christmas. That somehow the arrival of December 25th will miraculously put an end to all anger, all hatred, all strife that we see and hear, we experience and confront. That the “Prince of Peace” will do his thing. And that these Christmas moments that seem fleeting whether it’s in leaving this place or on that battlefield 100 years ago will become far more lasting.

But what we celebrate today is that Jesus’ entrance into humanity isn’t as some conquering King, vanquishing all enemies, establishing his rule and protecting us from any threat to this peace we so desperately long for -both personally and universally. Instead, He comes as a child, as a baby. He enters into our mess in a mess – no room at an Inn, relegated to being born in a manger with animals, to two individuals who 9 months earlier had their own dreams, plans and ideas of their life together pretty dramatically altered. Yet for those two people, for the Blessed Virgin Mary and St. Joseph – their saying Yes to God, their obedience to His will – not just for that moment or that day- but for their lives – made Christmas real, made CHRIST real not just for a fleeting moment – but for all of human history.

That is the key, that is the difference. He’s not here to do all the “fixing” of things that we want and need fixing. Being fully divine, and fully human, He shares Himself with all of us to lovingly guide, challenge and call us to the hard work of holiness. When we recognize that, we realize:

That moment on that battle field didn’t have to be a moment.

Those soldiers chose to create that truce, honor that truce.

They allowed Christ into their hearts and their lives – so much so that not even the orders of their governments, who had balked when Pope Benedict 15th had begged for a Christmas truce – not even those Governments and their orders could stop Him from being real, being present in the lives of those soldiers and bringing that elusive peace to reality on that battlefield.

But on December 26th, they chose to stop following Him. They stopped obeying orders from the Prince of Peace and followed the orders of man – leading to more destruction, more warfare, more pain, more loss.

What will it be for us? The hope-filled promise of the entrance of Christ into our lives – our messy, pain-filled, trying, real lives is renewed with this celebration of Christmas to remind us that He wants to be here – Jesus wants to walk with us, wants to be with us. Not to commiserate and quietly observe us struggle. But to be that light that Isaiah prophesied about in the first reading – that light shining to the people who walk in darkness and gloom. Calling us out of that darkness, out of that gloom. 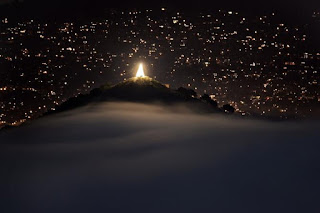 He calls us to be that people who will follow that light – in this moment, and every moment to follow. To be that light to one another in those difficult situations in our homes and at our tables – as well as in our workplaces, campuses and throughout all the varied public squares of our nation that seem to be growing darker, getting angrier.

Pope Benedict XVI a few years ago said “The message of Christmas makes us recognize the darkness of a closed world, and thereby no doubt illustrates a reality we see daily. Yet it also tells us that God does not allow Himself to be shut out. He finds a space, even if it means entering through a stable, there are people who see His light and pass it on.”