Hi everyone here’s my homily for the FOURTH SUNDAY OF ADVENT – December 18, 2016. The readings for today can be found at: http://www.usccb.org/bible/readings/121816.cfm. Thanks as always for reading, for sharing this blog on Facebook, Twitter and Reddit – and for your comments and feedback. Hope you have a blessed week – God Bless – Fr Jim 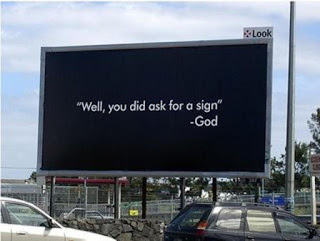 HOMILY:
How often have you asked God to give you a sign?

When you reflect on that, it probably happens more often than we might initially think. God, what am I supposed to do with my life? Lord is this the person I’m meant to be with? Jesus, give me a sign that you love me (this one is usually followed with a suggestion on how He might do that). It’s understandable. We’re told that God loves us. That He answers everyone of our prayers. So in a way, we admit that maybe we’re a little dense, perhaps we might have missed that answer or not clearly understood His plan when things aren’t going the way we think they should. So we want some clarity, some understanding, some reason brought into whatever situation it is we find ourselves that causes us to pray in this way: Where we look for more clues, more evidence of God’s presence, His activity in our lives. We ask for a sign.

So often we’ve heard or seen so many variations of the Christmas story that different details and aspects of it are so familiar that other areas can kind of get overlooked. For example, we remember that both Mary and Joseph had an angel tell them and explain to them how Mary was going to become the mother of Jesus even though Mary and Joseph had not been married and not had relations with one another. But there’s a detail about this that kind of fascinates me:

Because after Mary experiences this encounter and agrees to what the Lord was inviting her into, we know that she goes and tells Joseph. And then the scriptures kind of just matter-of-fact tell us that Joseph was planning on divorcing her quietly. But the more you reflect on it and dig into this, you realize that Joseph must have been broken hearted. Because Mary and Joseph were betrothed, but not living together. We often use the term “engaged” to explain this, but in ancient Judaism, betrothal was more than just what we would understand as engagement. Betrothal was the time when the couple were already legally married but before they lived together. From the betrothal on, they could only be separated by death or divorce (which wasn’t very accepted in ancient times). 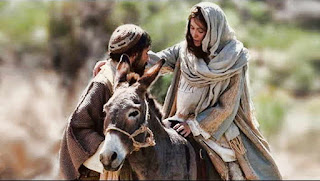 So Mary tells her betrothed, Joseph, of her encounter with the Angel Gabriel. How she would conceive a child by the Holy Spirit, how this Child was to be Jesus and what his birth would mean for humanity. And we read Joseph her husband, since he was a righteous man yet unwilling to expose her to shame decided to divorce her quietly. That one sentence says a lot. Joseph is identified as a righteous man. Learning that he would not be the biological father of the child his wife was carrying is something that would bring shame to him, to his family. Had he been simply self-focused he could have demanded that his righteousness be protected. He could have divorced her publically, not even enter into the debate about this story that Mary was presenting to him.

But Joseph loves Mary. Maybe he thought Mary cheated on him – that’s kind of far-fetched for us to consider; maybe he just didn’t understand what Mary was saying – that’s probably more easy for us to appreciate… it’s doubtful we’d begin to understand hearing such a story ourselves were we the first recipients of it… We can’t read Joseph’s mind wondering what were his thoughts on hearing all of this news from Mary. But we can imagine what was going on in his heart… Most likely a broken heart that didn’t know how to reconcile this tale, with the plans, dreams, hopes this betrothed couple had imagined of their life together. Joseph can’t see another way out to be the righteous man he was, and allow his betrothed wife to enter his home, already pregnant and not feel shame… More than likely Joseph asked God for some answers, some clarity, some understanding… a sign.

Which is what we heard in tonight’s Gospel – God was unwilling to let Joseph move on through life with a broken heart. God the Father sends an angel to Joseph in his sleep, and invites Joseph to let go of the hurt he feels with his dreams disappearing and instead to dream His dream. Dream His dream of being a father to His Son Jesus in a spiritual and real way. Dream his dream of taking his wife Mary into his home, to love, honor, cherish, protect her all the days of his life as a more urgent task now that this child is to be born who He has even bigger dreams for. 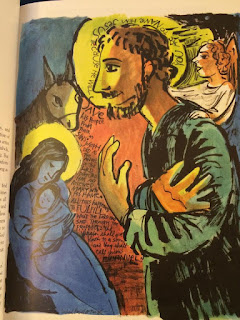 St. Joseph has taught me a few beautiful lessons with this – that has helped shape my understanding of God and I think is really important for each of us when we have our moments of asking for a sign. First is that we have to be open to how the Lord wants to speak to us. Just because your betrothed gets an angel popping by the house one afternoon, doesn’t mean that’s how God is going to “visit” you. And that’s a good thing. For me, while there’s times I kind of want that type of unambiguous, awesome, definitive direction from the Lord – there’s probably a reason why God doesn’t speak to me that way (probably a couple good reasons). He who made us, who knows us so intimately that scripture tells us he knows the exact numbers of hairs on our heads – knows how best to speak to us. So I can’t let jealousy or envy that God speaks and works differently in one person’s life compared to mine enter in. Because if I do that, more likely I’m going to miss how God is speaking to me.

The other lesson is that we have to be connected to the Lord in our everyday lives so that we can know how to see Him, hear Him, encounter Him in those bigger moments when we are crying out for signs. Joseph had to have been a man of great faith, and trust, and prayer… He had to already have been a man in relationship with God to have been able to appreciate and accept this “dream.” Had he not, it would’ve been easy to dismiss it as a crazy dream. (I knew I should’ve passed on eating that Camel last night) Because Joseph knew the Lord already, He was able to hear Him speaking to Joseph in this difficult hour.

As we enter this last week of Advent – it’s good to remember what this season is all about. Pope Benedict XVI said “Advent…invites us to pause in silence to understand a presence. It is an invitation to understand that the individual events of the day are hints that God is giving us, signs of the attention he has for each one of us.” So, in other words, more than simply commemorating Jesus’ birth over 2,000 years ago, we’re being invited to see that Jesus is Emmanuel – meaning God is with us. His presence continues to dwell with us in a lot of ways, but most obvious – in these scriptures, in His Body and Blood which we are offered to take and eat – thereby making Him really present in our body’s and souls. In these ways, Jesus becomes even more intimately close to you and I than he ever was to St. Joseph. So it shouldn’t come as a shock that He would be speaking to us, inviting us to continue His work of salvation in our day and age, helping to bring Him to birth here and now – and providing signs of those realities. May you and I be open and attentive to the ways He is speaking to us – speaking to our fears, our doubts, our worries; inviting us into deeper love and trust with Him, His plans, His dreams for us; so that we too can make Christmas truly a celebration of His birth – for each of us, and for the world once again.