Hi everyone… Here’s my homily for the SECOND SUNDAY OF ADVENT – December 4, 2016.  The readings for today can be found at:  http://usccb.org/bible/readings/120416.cfm.  Thanks as always for stopping by to read this blog, for your comments and feedback – and for sharing it on Facebook, Twitter, Reddit and wherever else on the social media world… I’m shocked looking at some of the stats each week, and deeply grateful.  Have a great week!  Fr Jim 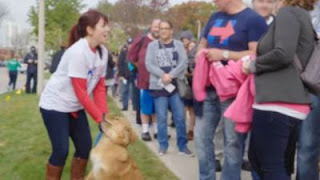 At the height of last month’s bitter campaign and election, after a deluge of awful advertisements from both campaigns that just made people more fearful, angry, politically charged and left people feeling more divided than perhaps any other campaign has done before, there was one TV commercial that was quite different. First off it was a three minute advertisement. In a media world where we’re used to 140 character tweets, and 30 second commercials at the max, that’s already outside of the norm. That it came from Pedigree – a dog food company also seemed odd – as they are hardly used to big budget marketing campaigns like Budweiser or Ford or some national company like that. It opened with pictures of both campaign rallies showing signs saying “Hillary for Prison” “Dump Trump” and so on. The commercial then introduces this “social experiment” that they wanted to try out. They had a young woman go to both Clinton and Trump rallies with what she describes as a lost golden retriever. At each event she goes to, she is wearing the opposing candidates shirt.

Even though it was a commercial – so you had to guess how it would work out, I mean, would they spend all this money on a commercial if it went horribly wrong? -but, as any good film-maker or story teller is able to do, you kind of got sucked into this short story very quickly not really knowing what would happen. You see this woman with this dog wearing a Hillary Shirt at a Trump rally and vice versa. She quickly starts engaging people asking “does anyone know someone here who’s lost a dog.” The first time I saw it, I felt the knot in my stomach thinking “oh no… please… no… please don’t have people say or do something stupid or mean.”

After initially some chilly receptions, people were kind of drawn to trying to help this woman find the dog’s owner. The care and the concern turns to the “poor lost dog” with the attendees at the rallies and this “enemy” supporting the opponent, all petting and talking about the dog. Political differences were cast aside as both Hillary and Trump supporters bond with the woman over their love of dogs. That three minute ad, entitled “Vote for Good” which was shot over the last two weeks of the campaign and shown on the day before and the day of the election may become the most memorable ad as it went viral and was viewed millions of more times online. “I love that apparently when it comes to dogs, there’s no political party,” says one Clinton supporter “We do agree that we love dogs, and dogs love us,” says a man dressed in a Trump shirt. The ad closes with: “This election has brought out the worst in us, We sought to remind people what brings out the good.”  (You can watch the video here:)

What brings out the good. That’s something that comes to mind when we look at these scriptures we’ve just heard. Today’s readings from Isaiah and the Gospel of St. Matthew, probably to our ears sounded a bit too unrealistic, too off putting. In the first reading we’re hearing about a wolf being a guest of a lamb, leopards lying with kids, calves and lions browsing together with a child guiding them – cows and bears being neighbors and baby’s playing in a cobra’s den… that’s right – A Cobra’s den. You could be forgiven for thinking “what was Isaiah on that day?” We don’t see how any of that is real how any of that is possible – so our impulse is to dismiss it.

Similarly in the Gospel reading – we hear about John the Baptist – this guy wearing camel’s hair, eating locusts and honey living out in the wilderness. He calls the religious authorities of the day “vipers” and calls the rest of the listeners to “Repent for the kingdom of heaven is at hand.” Again, it’s not shocking that some might be initially dismissive of this rather eccentric guy and wonder – “Uhhhh… what?” 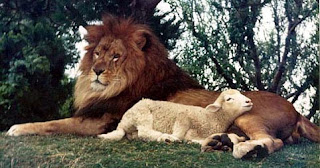 Isaiah’s prophecy of this ideal, peace-filled vision probably seemed as far-fetched to his first hearers as it does to us. But part of the reason that’s the case is that we rarely see the goodness of the world that God created – the goodness of one another. We are hurt, angry, frustrated by things, people, events – which often results in us responding in equally hurtful, angry, frustrating ways.    It’s why some 3 minute commercial isn’t so silly. In those three minutes, we got to see real people dropping some real animosity and tension over a lovable animal. In that moment, albeit brief, we can maybe begin to have Isaiah’s even more expansive and glorious vision of a peace-filled earth that the Messiah will usher in.

But in order for that to happen, we have to want that vision to be our vision. And we have to make our vision, our mission. Which is where John the Baptist picks up. We hear these kind of stark words from the prophet “Even now the ax lies at the root of the trees…every tree that does not bear good fruit will be cut down and thrown into the fire…” not exactly sounding like he’s in the Christmas spirit (someone get John a candy cane). But he’s trying to get us on the right path to the true meaning of Christmas. Not our pretending like Jesus is going to be born again in Bethlehem to Mary. That happened 2,000 years ago. But rather our bringing Christ to birth here and now.  We do that when we start to repent of our pettiness, our grudges. We do that when we reach out to those we’ve been estranged from.   When we become prophets ourselves and engage in the hard work of bringing some peace, some compassion, some mercy into this world around us. To play the roles of John the Baptist and Isaiah in our homes, workplaces, campus.  May we hear the challenge of the season of Advent that calls us to celebrate, to uphold, to seek out and call attention to all that is good in God’s creation… recognizing how Jesus has reconciled all creation and revealed God as our Loving and Eternal Father.  Then we will remind others – and maybe even remind ourselves – of the good there is inside us.