Hi everyone… hope this finds you well!  Thanks for stopping by this blog and reading; sharing it on Facebook, Twitter and Reddit; and your feedback and comments.  The readings for today can be found at: http://www.usccb.org/bible/readings/111316.cfm.  Thanks again – have a great week & God Bless – Fr. Jim 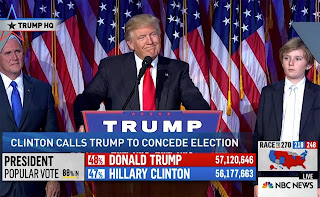 That they fall this Sunday does seem a bit of a weird coincidence. Just looking at the news this past week, I know that at least half of the country feels “it’s the end of the world”. After the election results started coming in Tuesday night, it was reported that the Canadian Immigration website crashed from people looking to leave the country. I thought that was a bit of an exaggeration, till I read this headline “CHER TO LEAVE THE PLANET”. The 70 year old singer – actress was so distraught over the election that she’s said to be moving to Jupiter.

As if the widespread feelings of armageddon that many are experiencing wasn’t troubling enough – I had my own demise to deal with this past week. As I was working on my homily, I got a message from a friend of mine on Facebook – Fr. Jim, you ok? – yeah I’m okay –you’re coming up as a “memorialized account”?? – hahaha – really?  yes: and then he shared what was posted on the top of the facebook page:
Remembering Jim Chern
We hope people who love Jim will find comfort in the things others share to remember and celebrate his life.(Even in death Facebook won’t call me Father Jim – jerks) 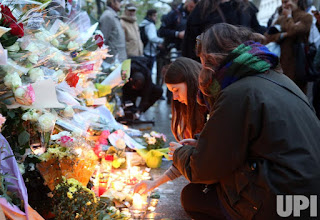 We’re living in some peculiar times. The anxiety levels seem off the charts. The division that the nation went throughout this torturous 18 month slug fest of a Presidential campaign – it was probably naïve to think would magically go away Wednesday morning – no matter who won. I tend to see that this is just one very big and dramatic example of this feeling that many people have like ‘it’s the end of the world.’ We’ve seen terror attacks on our television screens — today it marks one year since those horrific attacks took place in Paris; and since then there were attacks in Belgium, in California, in Florida – things that don’t get as much notice as they have become almost a part of our lives. There’s been all kinds of earthquakes and natural disasters around the world that many in the US haven’t noticed as we’ve been focused on the election. Polls (if we can believe them anymore…) show vast numbers of people seem to agree on only negative things: Our nation is on the wrong track; the next generation will not do better than ours. Real cheery stuff.

Not sure if it’s comforting to know we’re not the first people to live in uncertain times. To feel similar feelings. For the Jewish people in Jesus’ time, they too found themselves dealing with tremendous loss and worry about the future. They had already lost control of their homeland. They were occupied by the Romans, who they hated for this oppression. They were divided and fractured as a people – you had various factions that believed different things – (Red state Jews and Blue State Jews?) so while they might have all been Jews, they weren’t united.

The one thing they had… the one thing that remained… the one thing they could focus on in terms of their worldly identity, their presence was their temple. Yes the temple had suffered attacks in the past, but it had been rebuilt, and it was a sight to see. For the Jews it was a connection to generations that preceded them. It was a sign of hope for their future. And it was beautiful. It was magnificent. It was something they always assumed would be there. In fact they looked at that as a sign of hope for the day when the Messiah would come, bring the tribes of Israel back together again and establish God’s kingdom here on earth.

So now with that in mind – look at today’s Gospel. Despite all the terrible things in their lives, the people are able to look and marvel at the temple. Noting the beauty of what was an important symbol of their faith. Jesus, who many had come to believe was the Messiah (which he was) says “All that you see here –this temple – it’s going to be gone…” 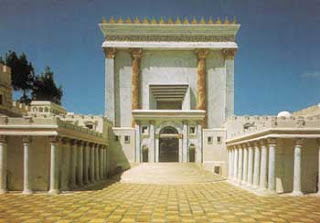 They’re shocked – When??? When will that happen? What will the signs be? (Maybe we can stop it from happening if we know the attack is coming) What does all that mean? They were used to their existence as it was, thinking: Yes – we’re occupied people, we’re mistreated, we’re not living the freedom that God’s chosen people should be experiencing, but look at the temple… They were looking at a building, a place a thing as a source for their security.

But the temple, as beautiful, as historic, as important as it was became something more than it should’ve been. Because they were fixated on something tangible of this earth that they had built, the people became closed minded, closed hearted to hearing and seeing how God was active in the present moment. How God was moving them into being truly His people. That His Kingdom would not be held bound to things, places of this world. That God’s Kingdom would be far greater than any single place on this world could contain.

For that to happen, they would have to see past these places, not put faith in earthly things. Jesus is pretty much saying – don’t look for stability in the things of this earth… they will all pass away. And yeah, it’s unsettling, it’s downright scary at times. It’s going to be pretty earthshattering to see the temple go away. It’s going to be devastating to see Jesus himself crucified… Its going to be jarring to suffer persecutions just because they follow Jesus. Jesus realizes how hard it is for them to trust in supernatural things when they see institutions, things of the world we live in collapsing. How can they believe in eternal things, a God who loves us through all eternity?

We might feel similarly. We see how divided we are as a nation – where one half is furious 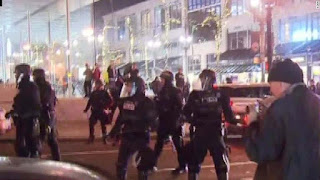 with the election results and hopefully more than just the other half is furious with lawless riots that have sprung up in the days sense. Outside of that – We’ve been scandalized by the failures we’ve seen, in the world, or experienced in our own lives…

There’s things that scare us, big time – from the wars waged overseas to the wars in our families…the persecutions we see one person do to another, that we do ourselves…

We are just one more generation that has wondered as our ancestors in the past has “is this going to be it?””Is this the end of the world as we know it?” And in one sense – yes… it is. This world will not be the same tomorrow, or a month from now, or a year from now. And even more – There will come a day when even this great nation of the United States that we love so much, fight passionately over as we have in this past campaign – may pass away as did the great empires that Jesus’ contemporaries lived in.

Yet in spite of all that doom and gloom, something still calls us together. Something still in spite of all that, in spite of how temporary everything around us seems to be… Something, someone still has a hold on our heart. Still has a hold on our souls… We realize we’re connected to something, and someone greater than anything we can find in this ever changing, upside down world of ours: That someone is Jesus and that something is His Catholic Church We look at how our Catholic Church has continued its unbroken history for over 2,000 years and realize how we are a part of something bigger led by someone greater than anything else on this earth. He’s inviting us into His eternal kingdom, into an eternal life that will not pass away – and wants us to share that good news to a world desperate for it.

So when fear & doubts creep in, when people believe that “it’s the end of the world as we know it” we are to remember Jesus promise, stay connected to Him, knowing He’s here for us. So much so that His promise remains: Not a hair on our heads will be destroyed…By our perseverance, we will secure our lives…