Hi everyone – happy Feast of All Saints!  Today’s readings can be found at:  http://usccb.org/bible/readings/110116.cfm.  Thanks as always for reading, sharing this blog on Facebook, Twitter and Reddit – and for your comments and feedback.  Always appreciate hearing from you!  Have a great day – Fr Jim 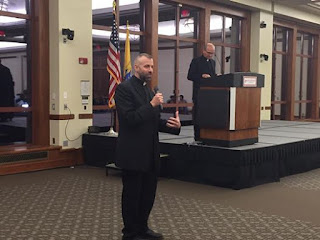 About a month ago, our Newman Catholic Center here at Montclair State University sponsored our annual lecture series where we invited Fr. Vincent Lampert from the Archdiocese of Indianapolis to speak with us.  He’s not exactly a world famous name, but just like 6 years ago the first time we had invited him to speak on our campus, over 500 people came to hear him speak.  Why?  Because he is an official exorcist of the Church and one of the few that is willing to publicly speak about his experiences confronting evil in the rare and extreme cases of demonic possession.

While we’re always happy to have a big crowd attending an event that we’re holding, that this remains our most attended event in the 10 years I’ve been here is a bit strange.  On one level, it shouldn’t surprise me since we’re hearing about something that’s a rare and unique thing from someone who is in the thick of dealing with them.  But I can’t help but feel at least a little bit sad that, the reality is, today we have a few less people with us for All Saints Day.

Because one of the observations that our retreat directors gave us over the past weekend was that demonic possession is kind of the devils way of mocking what we celebrate today – Saints.  Exorcists deal with trying to heal a person who is possessed by demons, by evil.  And that’s a frightening thing.  But if it really frightened us, we wouldn’t be drawn to that (or shouldn’t).  Rather we should focus on the fact that the thing that makes a saint a saint is that they become utterly and completely possessed by Jesus Christ. 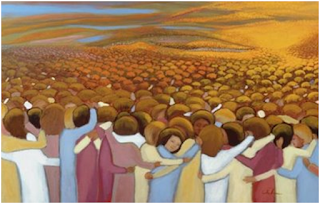 We honor today the countless numbers of men and women who’ve done that for centuries – who there isn’t a canonization of them (like Mother Teresa had two months ago), there’s not a feast day for them (like St. Francis of Assisi or any of your favorite or patron saints).  The Church recognizes that there are countless numbers of people who may be unknown to us, but they aren’t unknown to the Lord.  They might be that devout grandparent who loved Jesus, lived Jesus in such a way that their sanctity could be felt while they were with us, and we sense their prayers for us to this day are still assisting us.  They are the nameless, anonymous people who have been killed for being a follower of Jesus Christ; martyred for the faith throughout the ages (including over 200 who were killed this past weekend by ISIS that we’re not hearing about as we continue to hear about Hillary and Donald and who’s going to win)

The thing about Saints is that they weren’t born this way like in some Saint bubble.  They struggled with the same sins, the same temptations that you and I do.   But they kept striving, kept wanting to align their will to Christ’s.  They kept wanting to defeat the devil, avoid evil, and make their lives a witness to the joy, the love, the mercy of God that we hear about in The Beattitudes in today’s Gospel.  They are those who despite being poor in spirit, mourning, meek, hungering and thirsting for righteousness – never forgot that Jesus was with them in the midst of their struggles  – and so they were Blessed.    Or those who the Lord saw as blessed because these sons and daughters of his, brought mercy, brought peace, were clean of heart, suffered persecution for being His son and daughter.

May all of these our brothers and sisters who having been found worthy are in Heaven, and are cheering us on, praying for us – may they encourage and inspire us to recognize the beauty of the words of St. John in that Second reading – Beloved, see what love the Father has bestowed on us that we may be called Children of God.  That’s who God created us to be – his beloved Children.  May we turn away from evil, strive for the holiness that we were made for so that the words of the psalm may be ours: Lord this is the people who longs to see your face.