Hi everyone, here’s my homily for the 31st SUNDAY IN ORDINARY TIME – October 30, 2016.  The readings for today can be found at: http://www.usccb.org/bible/readings/103016.cfm.  Thanks as always for stopping by and reading this blog, for sharing it on Facebook, Twitter and Reddit and for all your comments and feedback.  I always appreciate hearing from you!  Have a great week & God Bless – Fr Jim 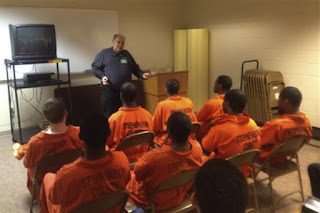 A journalism professor by the name of William Drummond was used to teaching the basics of covering the news to some of the highest of achievers at UC-Berkeley. But recently he came up with a unique assignment for a very unique group of students. He was volunteering teaching a class at San Quenitin Prison and was introducing a class of inmates to the basics of news writing. While the writing of obituaries is probably the least desired task of newspaper reporters, Drummond thought that asking the inmates to write fictitious death notices would be a good starting point to introducing them to the basics. But there was a spin: instead of writing about a pop-star or politician’s imaginary death by an overdose or an accident, he asked the men to write about a different death – their own. They had complete creative freedom, where they could choose how they died, and sum up their lives however they wanted.

Professor Drummond admitted he wanted to do more than introduce them to journalism. He said “I did it as a way to find out how these guys had reconciled their crimes, Were they able to take a critical look at what got them in trouble?” The inmates, were initially uncomfortable. These were people who were best known for their worst decisions — stabbing a man to death, gunning down a bystander, robbing banks. Now they were being asked to be reflective and answer the question: “What is your real value?” The collection of obituaries that the Los Angeles Times printed were thoughtful, introspective, creative, sometimes inspirational… One inmate pictured his death trying to protect Professor Drummond from an imaginary prison riot taking place saying that he wanted a noble end to his less than noble life.

One story that stood out in particular to me though was written by 57 year old Juan Haines. He didn’t dodge what brought him to San Quentin – being sentenced to prison for 55 years to life for bank robberies he had committed. He didn’t get overly dramatic in imaging his death, writing that he simply couldn’t be woken up one morning in prison and it was later determined that he died of natural causes. The bulk of his obituary though focused on his childhood in San Diego, including a wrestling match victory and a stint as junior class president. Juan seemed incredibly nostalgic of that time in his life, including a quote from a classmate saying “He built the treasury from just a couple of dollars, to several thousand. His biggest accomplishment was at Homecoming, our float was the biggest one, and our Junior Class Ball was held at a big fancy hotel. The seniors were somewhat jealous.” 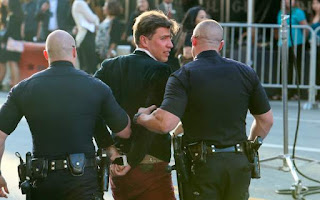 When Juan was asked about why he spent the bulk of his obituary on that part of his life from over 35 years ago, he said “That was when I was actually doing what I wanted, I was on track. Once I got derailed, that was it.” While all of these stories were sad in their own way, this one was particularly so. Juan believes that his life is over. He has no family members or loved ones to speak of. And because of these bad choices and mistakes he’s made, he kind of lives with this idea that there’s no hope for him.

Hopelessness – when someone gets to that place where they have no expectation that anything good is possible… that any success can be achieved; when one starts to despair; whether we are observing these things happening to others; or perhaps going through it ourselves – there’s probably few things worse for a man or woman to experience.

Zacchaeus, is a man who believed and experienced similar things about himself. He had no Hope. He was the ultimate outcast. As the chief tax collector he’s the epitome of a traitor: He’s working with the enemy – the Romans who’ve occupied his fellow Jews, collecting taxes from them – then charging them extra for himself. So to put it mildly, Zacchaeus’ fellow Jews would not be fans of his. The Romans, while they’re happy to use the guy – he’s getting the job done – – – but he’s not one of them – he’s not a Roman – so it’s not like he’s getting invited to any of their dinner parties. Even St. Luke our Gospel writer who’s sharing the story doesn’t sound like he’s a big fan. He could’ve just set the story up that Zacchaeus wasn’t able to see Jesus so he runs ahead and climbs a tree. Adding that “he was short in stature” – seems kind of harsh… kind of unnecessary.

In any event, Zacchaeus probably had resigned himself that for his life, that was it – he was going to be known as an outcast… a reprobate. Sure, he was wealthy. But the fact that he’s out there that day, trying to catch a glimpse of Jesus shows that he’s not satisfied with his wealth.  The fact that he’s out there in the midst of crowds who know him and aren’t happy to see him – so much so that they won’t let the little guy in or up close to see Jesus (perhaps were shooting him some nasty looks) – shows that he is looking for someone, something to restore his Hope. Maybe wondering Is there even a chance for someone like me? He’s got nothing to lose at this point -climbing this tree – thinking perhaps he will hear or see something that will do something for him.

Jesus looked up…. What does Jesus see? He sees the loneliness, the brokenness of the man in the tree. He sees the lengths Zacchaeus went through just to see Him. He sees Zacchaeus in all humility looking for hope…. looking for Jesus. Jesus says Zacchaeus, come down quickly for today I must stay at your house. 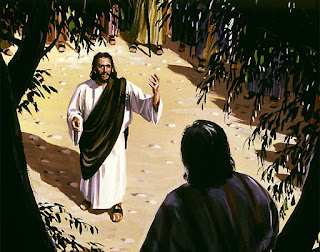 With Jesus inviting himself over to dinner…
With Jesus saying I desire to be with you…
I want to enter into your loneliness, your brokenness…
I want to go to your home for things to change,
Zacchaeus is being offered a radical new life.
He wasn’t being seen as just some short guy or a wealthy man…
He wasn’t being seen through the lens of others in the crowd: a traitor, or some puppet of Rome…
Jesus looked at him right there, right as he was in the midst of his mess with love.  And that look of Love from Jesus made all the difference. It restores his Hope. Zacchaeus who had given up everything in the pursuit of riches, and power does this 180 degree turn – now promising to give all of that up just because of this encounter with Jesus. The lengths Zacchaeus went through just to see Jesus that one day would be incredibly insignificant in comparison to the lengths he’s going to go through from that moment forward.

When we look around our world, it’s not hard to see a lot of hopelessness. A few times a year our University student center has this activity called “Post a secret” where students can anonymously write a post it note and share anything they want. And sadly, every time I glance and read these anonymous cries for help; people, students, brothers and sisters of ours who are experiencing hopelessness saying things like: “I wish my mother loved me” “When a relationship requires depth and work, I’m out” ” I’ve used alcohol to self-medicate anxiety” “I’m afraid because since I don’t know how to love myself, no one else will”. Sometimes, we suppress those types of thoughts and feelings ourselves: When we struggle at work, when there’s difficulties at home, when illness and death hit our loved ones – and we feel like no one knows, no one understands, no one is listening…

The beauty of this story – the beauty of the Gospel – is that our stories are never finished. We don’t have to give into the lies that others say about us, or that we tell ourselves. That were not good enough, holy enough, worthy enough to be in Jesus presence. The reality is Jesus is searching for us, wanting to gaze on us with His eyes of Love. Despite how trapped we might think we are by the poor decisions we’ve made, despite the prisons we find ourselves confined to because of whatever mistakes we keep letting define us and weigh us down, Jesus offers us true freedom when we lift our downcast eyes to look to Jesus- when we stop listening to the devil’s insistence that our past is our present and future and hear Jesus offering us His Love, His Mercy and calling us to change our lives here and now by becoming loving and merciful ourselves. When we allow him to, we discover the truth of what Pope Francis recently said: “Even in the darkest moments: in the times of sin, in the times of fragility, in the times of failure, I looked to Jesus and I trusted Him and He did not abandon me. He is a faithful companion.”

May Zacchaeus prompt in us: the boldness to not let anything prevent us from seeing Jesus; the humility in letting Him look at us as we are; the courage to let His look of Love transform our lives – so that when the final story of our life is written, it will testify to the world of the Hope that is found in being loved by Jesus.