Hi everyone, here’s my homily for OCTOBER 9, 2016 the 28th Sunday in Ordinary Time. The readings for today can be found at: http://www.usccb.org/bible/readings/100916.cfm . Thanks as always for reading, sharing this on Facebook, Twitter, Reddit and for all your comments and feedback. Have a great week – Fr Jim 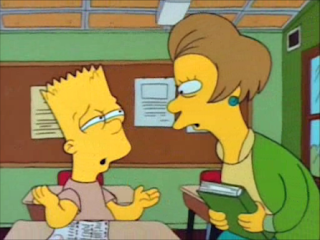 It’s hard to believe that the prime-time cartoon “The Simpsons” has been on for close to 30 years now. While “new episodes” about the dysfunctional Simpson family of Bart, Homer, Marge, Lisa and Maggie doesn’t seem to be as good as it used to be, I still crack up at re-runs from the early seasons. One of my favorite episodes from those first seasons, is called “Bart Gets an F.” The episode sets up what a terrible student Bart is. After he fails his book report on Treasure Island, Mrs. Krabappel keeps Bart after class and points out that his grades are steadily falling and reminds him about the major history test the next day. After dodging taking the test with fake illnesses, then attempting to cheat, Bart eventually fails that test. Things have gone from bad to worse, so much so that the school is considering making Bart repeat the 4th grade again. At hearing this Bart tells everyone he will do better and he promises to pass the 4th grade. While Bart makes some improvements in his academics, eventually it comes down to this last big test. That night before going to bed and after studying, Bart still realizes that as much as he’s tried, as much as he’s made some strides, he still feels he hasn’t done enough to pass the test. Lisa watches, as he offers up a prayer to God that goes:

Well, old-timer, I guess this is the end of the road. I know I haven’t always been a good kid, but if I have to go to school tomorrow, I’ll fail the test and be held back. I just need one more day to study, Lord. I need your help. His sister Lisa, spying on Bart from the hallway observes: Prayer – The last refuge of a scoundrel. Bart continues in his pleading to God laying out options: A teachers’ strike, a power failure, a blizzard. Anything that’ll cancel school tomorrow. I know it’s asking a lot, but if anyone can do it, You can. Thanking You in advance, Your pal, Bart Simpson 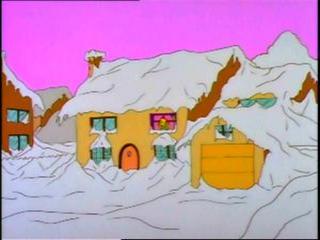 The scene ends with flurries start to fall on the Simpson’s house at nighttime. The next morning Marge wakes up Bart, and shows him all the snow that has fallen. The family huddles around the radio in the kitchen listening to business and school closings. Bart and Homer do a dance when they hear that the school and somewhat (frighteningly on reflection now) the nuclear power plant are closed. Bart throws on his snow gear, grabs a sled, and heads outside, but Lisa blocks the door tells him she heard his prayer and says I’m no theologian. I don’t claim to know who or what God is. All I know is he’s a force more powerful than Mom and Dad put together. And you owe him big time.

What is the point of prayer? Does the appearance of our wishes being answered mean that God has heard our cry, changed the cosmos over all the other prayers and intentions of the day to give us what we want, hoping that we will love him, serve him, be devoted to him more? Sports fans, tend to think they’re teams are truly blessed (or have made a deal with the evil one, depending upon your fan-perspective) but does God really operate that way to change the course of events to make sure that one ball goes over the wall, to get the home run, to win the game, so they advance to the next round of the playoffs?

Interesting questions that Saints and theologians give a lot of different answers to. Can God do those things, yes… Would He? Does He? Why would He? Not so simply answered.

Even more challenging, What about us? What is our motivation – what is the point of prayer for us? Is God just some magic genie in the sky that we try to placate, manipulate things out of for our own well-being (and if it helps someone else out too, that’s great…)

For 9 out of 10 of the lepers whom Jesus encounters in today’s Gospel, it kind of appears that way. Just a refresher on leprosy – it was an incurable disease… to this day, it can be prevented and controlled but it cannot be cured. It causes loss of sensation, paralysis and it’s just pretty gross. Because of all that and the fear that it was highly contagious, lepers were cast out of the society. Sent to live apart in a colony of people with the same ailment. So now not only were they sick, in pain, afraid… they were also incredibly alone.

As Jesus is walking by this day… He’s not just out for a stroll by the way – he’s on his way to Jerusalem to be crucified… Even though he’s got his passion and death on his mind, Jesus remains other-focused, selfless. He hears the cries of these lepers. He hears their prayer – JESUS MASTER HAVE PITY ON US. Jesus simply tells them “Go show yourselves to the priests” and they are obedient. As they are on their way, they’re healed. Miracles don’t necessarily have to be big, dramatic moments that stand out like a burning bush or walking on water. God’s intervention in our lives often happens simply as we’re living our lives.

Perhaps it was because of this less than dramatic way that they’re cured that 9 of them, didn’t reflect on the cause of their healing. Only the one comes back to Jesus. Only one comes back in worship and awe. Only one comes back to say “Thank You.” And in that, the one out of the ten underlines that this Gospel is more than just about good manners (as if Mom and Dad needed to explain to you “When someone cures you of leprosy, you say Thank You.”) – Jesus encountering the one who has returned to give thanks explains – You’re faith has saved you. 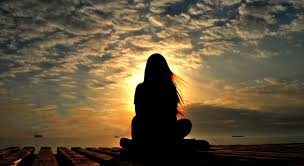 Prayer is meant to open us up, Prayer is meant to change us, not simply in giving us what we want – but recognizing that God truly supplies us with all that we could ever need. Prayer isn’t about getting that A on that test or that Home run in the world series or even working a miracle cure to a deadly, painful disease – rather it’s about recognizing how God is that loving, that attentive to all that we struggle with, all that we are, all that we hope to be… He sees us beyond this moment, this day, this problem, this struggle and sees the potential, the possibilities, the beautiful creation that He has made each of us to be. That realization is meant to change us to recognizing how our faith has saved us, sustains us as well.

For Bart Simpson, realizing that God has listened and responded to his prayers, that made him resist that temptation to play in the snow, study like he never studied before, and scrape through getting a D on his test, barely getting him to pass the 4th Grade. For us, it’s probably not so easy or cut and dry as a 30 minute sitcom would convey. St. Mother Teresa saw it like this: I used to pray that God would feed the hungry, or do this or that, but now I pray that he will guide me to do whatever I’m supposed to do, what I can do. I used to pray for answers, but now I’m praying for strength. I used to believe that prayer changes things, but now I know that prayer changes us and we change things.”

Jesus tells us that Yes, He hears our prayers, he answers them in His own way, in His own time… all with the hopes that we will truly find and discover how He is actively listening and responding to us always. May we be like the one leper, who once he realizes what God has done for him couldn’t continue to live life “as usual,” and find no better response than to return in worship, in awe, in thanksgiving to Him.