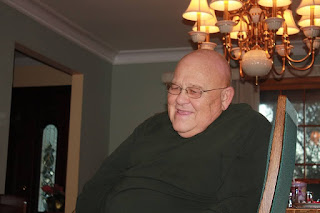 I’d like to punch the person who came up with the cliche “Time heals all wounds.”
Punching probably sounds a bit extreme, particularly coming from a priest,  but another cliche (or rather truism) is that one of the stages of grief is anger, so I think I’m covered.

Today it’s two years since my father suddenly passed away.  And I can’t quite wrap my mind around that.  Some days it feels much longer than that, others it feels like yesterday.  Some times it seems we’ve accepted this new reality as a family – others, I don’t want to speak for everyone else, but I know I find myself catching myself, reminding myself that this really happened.

In all of those varied and different emotions, feelings and experiences – the one constant is the realization that time hasn’t healed anything.  Because healing to me means wholeness, restoration. After suffering this loss, I think that part of the problem with that cliche is that on this side of eternity, that’s not going to happen.  It’s true, I’m not as in shock as I was two years ago, and have a better handle on my emotions and reactions to memories then I did in those first days and weeks.

So for me, I want to banish that cliche.  To me, grief is not a wound that is ever going to be healed till Christ vanquishes it forever, we’re all one with Him in his Resurrection, united in His Kingdom where seeing the Lord in his fullness, He will wipe every tear from our eyes.

In the meantime if I need an image to describe grief – rather than feeling frustrated at my wound that time has forgotten to heal, to me, grief is more like a break you’ve experienced on your arm or leg.  Yes the bone was re-set, the fracture mended…  you’re able to walk, run, wave – many of the things you were able to do before the break occurred, sometimes it’s like it never happened.  But at times the pain returns – sometimes without warning – maybe because of bad weather, change of seasons, different environment, or for no discernable reason at all – you feel that injury again, it throbs, it’s sore, you’re not able to do what you did before the break for a period of time – it hurts.

That’s what grief is to me.

Love and miss you Dad.