Hello everyone, here’s my homily for the 26th SUNDAY IN ORDINARY TIME – September 25, 2016.  The readings for today can be found at: http://www.usccb.org/bible/readings/092516.cfm .  Thanks for stopping by to read this blog, for sharing it on facebook, twitter and reddit – and for your feedback and comments. Have a great week!  Fr Jim 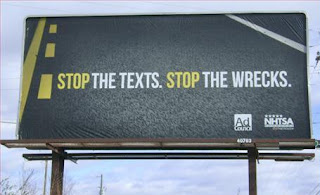 Have you ever noticed how many warning signs we get over things that you wouldn’t think we needed?  For example:

You would think that it would be obvious to all of us that driving 65 mph on the Garden State Parkway, or even slower on local roads with all kinds of split minute distractions and things to be aware of, that texting and driving isn’t a good idea. You would think we wouldn’t need to be reminded of that. Yet the fact that there’s a nationwide campaign with the slogan over the last few years called “Stop the Texts/Stop the Wrecks” all begging, pleading people not to text and drive says we do. Just a few that you might have seen took various approaches to try to get the point across to people – “Texting and Driving the same as suicide” “11 Teens die per week from texting and driving” “It’s a short trip from OMG to 911.”

Or – you would think that by now, everyone knows the dangers of smoking cigarettes (not going to get into the discussion of the dangers of smoking other things, lest this turn into an unintended debate). We’ve heard it in health classes in high school learning the dangers that tobacco, nicotine can cause to our bodies;    we’ve seen the dramatic commercials on Television where people who’ve lost limbs, been diagnosed with Cancer appeal directly to viewers not to suffer a similar fate that they have from smoking;    we can’t miss the huge warning labels slapped right on every packaging of cigarettes basically saying “THIS STUFF CAN KILL YOU.”   While the number of people smoking has decreased in the last few decades, obviously there’s a great number of people who do seem to be ignoring these warnings. 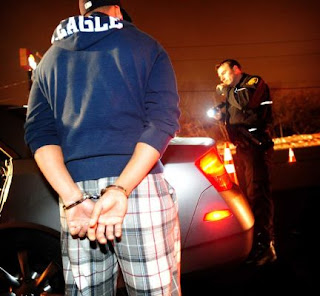 Or drunk driving…  How many celebrities do we need to see get arrested followed by a horrible public spectacle;  How many DWI checkpoints need to take place (some that are even announced well in advance, so it’s not like police want to arrest people) How many simulations have high schools done dramatically showing students getting arrested and others being portrayed as being killed in the accident to underline in our minds that we shouldn’t drink and drive?  Yet, people still take the chance – lie to themselves “I’m okay it’s only a few blocks” – get behind the wheel and ignore the warning…

All of these different efforts, campaigns, messages warning people of the possibilities of making poor choices… can be extremely powerful, effective, heartfelt and sincere messages.  But ultimately the decision to pay attention, to heed, to change our behaviors or not… to take the warnings to heart. . . to not be foolish to think we won’t suffer similar disastrous events as these other poor folks rests on us.

That’s the thing with warning signs we have to see the importance of them, realize what’s at jeopardy and then make a fundamental choice or decision to pay attention to them. To learn from them.  To heed the warning…

In today’s Gospel, Jesus is issuing a warning.  And it’s not simply a warning about the need of taking care of the poor. For the last few weeks we’ve been hearing Jesus teaching.  And in this crowd he’s got different groups listening to him:

– He’s got his disciples and followers there – so those are the ones who are already committed to Him.

– He’s got those who’ve heard about Him coming around and wanting to see what all the fuss is about.

– He’s got the Pharisees, the religious elite, the people who believed they were the religious experts of the day — they are there checking out what Jesus is saying too.

And what have they been listening to Jesus say?  Well in this one day, they first heard the parables of the Lost sheep – the Lost Coin – and “The prodigal son” (which we reflected on 2 weeks ago); then they heard the parable of the dishonest steward (which was last week’s gospel). And then right before we pick up on today’s Gospel reading, there was a small but really important incident that the lectionary skips before we get to Jesus telling this story about a dead man named Lazarus.

In that skipped portion, the Gospel says that “the Pharisees who heard all of this sneered at Jesus.”

Imagine that – they sneered at all that they had just heard. What was it exactly that they were so dismissive over?

– Were they laughing at Jesus’ revelation of who God is, this loving, merciful father who never stops thinking about any of His Children any of us – even the most lost, wayward of us…

– Were they rejecting Jesus’ telling them that the blessings of wealth, health and power aren’t signs – aren’t ways of showing how great and wonderful we are in God’s eyes… but rather it’s in what we do with those things, how we live as God’s own children that will determine that.

– Were they dismissing all of these things, considering themselves more superior to Jesus? 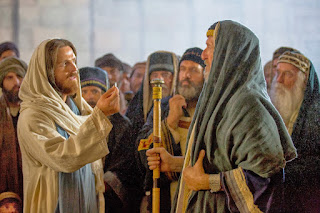 Whatever the case might be, they were missing the warning sign that Jesus was offering which was how destructive they were being to their spiritual lives.  Because as the rich and powerful Pharisees – who thought to themselves that they knew it all – that they “got” religion… (and probably thought to themselves Who’s this Jesus telling us who God is?  How dare he tell us that we need to take these blessings which tells us God loves us and help those who God has cursed – that’s why we’re rich and they’re poor).

Jesus loves and cares even for the Pharisees even as they mock him, He remains undeterred and tries again with another warning. So we hear this cautionary tale about this poor man Lazarus.

Now the thing about this message though is that it’s not Jesus being a pre-cursor to Robin Hood. He’s not interested in “class warfare” and pitting the rich versus the poor – which sadly some try to do to advance political arguments or agendas.

Because if you listened carefully, Jesus isn’t condemning wealth or riches. He’s condemning that the rich man who died was so attached to them, so blinded by them, embarked on a lifelong relentless pursuit for them, even to the expense of everyone around him.   Lazarus –who was materially poor and suffering didn’t even cross this guy’s mind as he passed him on the front stoop everyday. What’s so jarring is that the poor man isn’t some nameless, anonymous individual. The rich guy (interestingly who does remain nameless)  knows the poor guy’s name — LAZARUS.  After he had ignored the opportunity to utilize the most precious gifts of wealth, health and power to help the man at the door. After he had rejected the love of God which could have been radically transformed his and Lazarus life and countelss others around him… after all that, he’s wondering why there’s this abyss and chasm between him and God. He’s the one who’s created this chasm. Even then he remains self-centered…as he finally acknowledges Lazarus- calling out to him by name, he doesn’t beg his forgiveness – he only does so to ask Lazarus to now alleviate the torment he’s created for himself.

By then, Jesus explains, it’s too late.

God’s love, His Mercy, His desire for us to be with Him for all eternity never ends. That’s who God is. So these warning aren’t meant to scare us into following Him.  But Jesus wants us to be clear that these are all choices that we make. You and I might not be the “rich man” in the parable in terms of material wealth, but if we take stock of our blessings, our opportunities, our comforts – we have to see how indeed rich we are in many different ways. And there are people in our lives, in our visions who are in a sense calling out to us for our attention, our assistance, our love. There are choices that are played out everyday in countless ways right here in our towns, our families, our campus, dorms and classrooms.

How we recognize them by name and respond with offering whatever it is of ourselves that we can to fulfill their needs testifies whether we are pursuing Jesus or not.  Are we trying to follow him?  Are we striving to live this life in the way He created me too? Are we desiring and seeking Him? Or do I laugh in the face of Christ by my actions or inactions.

On a certain level, when we really reflect and think of all that God has done for us, all that we’ve experienced and continue to learn and grasp, it should be as obvious what it is we should do with these blessings, with this life of ours to serve God and one another. It’s kind of sad that we even need such warning signs over some obvious things.  What is sadder still is if we chose to ignore them.