Hi everyone, here’s my homily for the 24th SUNDAY OF ORDINARY TIME – September 11, 2016.   The readings for today’s Mass can be found at: http://usccb.org/bible/readings/091116.cfm  Thanks as always for stopping by to read this blog, for sharing on Twitter, Facebook and Reddit.  Have a great week. God Bless – Fr Jim 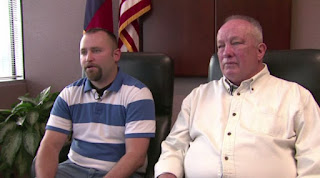 HOMILY:
Back in January of 2015, George Pickering III, a 27 year old man from Texas suffered a massive stroke.  Doctors and medical authorities had declared that the young man was not going to recover, that he was clinically brain dead, and had spoken to George’s mother and one of his brothers to get authorization to remove him from life support.  His father, (who is also named George) refused to believe that his son was brain dead.  Convinced that they were moving too fast, that no one was listening to his ‘father’s intuition’ that he was going to recover and with doctors preparing to begin the process of weaning the younger George off the life-saving machines, George Sr did something incredibly dramatic. He marched into the Tomball Regional Medical Center; went to his son’s bed side, grabbed his hand and pulled out a gun in the other hand yelling “I’ll kill you all.”  While he was quickly disarmed by one of his other sons, the stand off continued for hours as the father refused to surrender to police officers and George Sr. continued holding his son – George Jr’s hand.

That’s when something amazing happened. His son squeezed his hand back. In fact, it happened a few times… To the point that the SWAT team’s own doctors came in and saw that the son was in fact responding to his father’s command to squeeze his hand, proving that he wasn’t brain dead.  George Sr now convincing himself and the hospital authorities that his son was not brain dead surrendered to the police.  George Sr. ended up in prison for 10 months for his actions, but felt it was worth it to be able to be next to his son upon his release, seeing him fully recovered and hearing him say “Everything good that made me a man is because of that man sitting next to me.  There was a law broken, but it was broken for all the right reasons. I’m here now because of it. It was love.”
Stories like that generate lots of buzz, lots of interest. It has every element – it’s frightening (that there could be a medical mistake like that which could have cost the young man’s life) it’s incredibly dramatic, you have legal/family dynamics to it… It almost feels like a movie or maybe a bad TV movie.  But at the core of it, the amazingly beautiful, moving thing is seeing a father willing to do anything to save his son.

While I had heard this story right before Christmas in 2015, it didn’t come back to mind till I read, reflected and prayed with today’s Gospel for awhile.  This story is often characterized as simply “The Prodigal Son.” That’s what people have labeled it in the centuries since Jesus first told this parable. But to be honest, I think that really is a mistake. It shifts the focus the wrong way.  By titling it that, we are zeroing in on the terrible move made by this younger son.  But that’s really burying the real story – the real message. It would be like calling the movie “The Godfather” “Michael Corleone’s big break” or “The Wizard of Oz” “Adventures with Toto.”

The focus shouldn’t be about the prodigal son – but about a Father, willing to do anything to save his sons and daughters out of love.

You almost get the sense that Jesus knows how hard it is for his listeners to hear that, or maybe not hear that, but to actually, really believe that. Look at the crowd who has come to hear him – Pharisees and scribes who are already suspicious (at best) of Jesus and looking at these other dregs of society, these “sinners” coming around and saying “what are they doing here?” – thinking to themselves that if this Jesus is who He says He is, well, he should know that these sinners, these losers (tax collectors – even they’re here, come on… adulterers that’s one thing, but tax collectors…) All these losers don’t belong here. They shouldn’t even dare come into the remotest corners of God’s presence… Those who were labeled sinners already felt that way. That something they had done, said, mistakes they had made, wrongs they had committed – those things had left them disconnected from their neighbors, families and friends. So they believed God, too, had little use for them. Nothing to do but wait for that eternal punishment… 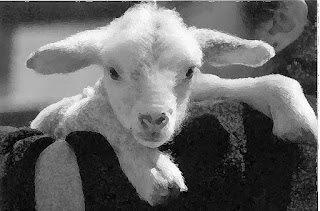 You almost get this sense that Jesus can’t contain His excitement as he’s trying to explain this – That one sheep, who gets lost out of the 100 – yeah, our Father can’t stop thinking about him… He’s worried about the sheep – is the sheep lost… is the sheep hurt… is the sheep scared… is the sheep about to be attacked by ravenous wolves… I have to find my lost sheep…

That one lost coin our of the 10, yeah our Father can’t stop thinking about that either – I know, I have other coins, I’m not broke… but it couldn’t have just “ceased” to exist… it didn’t just disappear, I need, no I must keep looking – I have to find that.

And then, almost like Jesus is thinking – ok maybe those two images don’t get it – so here’s another one – these two sons, our Father can’t stop thinking about either one of them either. They’re both grown men, the Father has done all that he could for them to share His love and His life with them. And what happens.

First the one wishes him dead (that’s the not so subtle thing he’s saying by asking for his “share of the estate” – Dad I really can’t wait for you to die so I get my inheritance, how’s ‘bout you give me mine now – talk about being an entitled brat). Despite the insult, the Father simply gives his son what he promised and gives him the inheritance, and watches as the kid takes off. The gospel says after the wayward one has finished making a complete mess and with shame and guilt starts to walk home, “when he was still far off, the Father caught sight of him, and was filled with compassion. He ran to his son, embraced him and kissed him.” That always struck me – the Father is there, looking for the Son, thinking of him, and at the sight of him, there’s not pain or anger over the past, there’s just joy that the one he’s been thinking of is coming home…


Now the other son somehow thinks he’s getting the raw end of the deal because the Father actually loves the brother who messes up as much as he loves him. The Father goes to him, not to argue, not to smack him in the head and ask ARE YOU KIDDING ME – NOW YOU TOO??? – he goes to him hoping the son will see he has never lacked, never been slighted and is loved. That the Father never stopped thinking of Him either, even as he was worried about what was lost.


The thing is that we live in a world keeps perpetuating lies, lies that say that people are as dispensable as lost sheep (hey, got 99 others…) That people are replaceable as lost coins (one of my coins is missing? well that’s what insurance is for) or that there’s a limit to the number of blessings available in this life (I better get my share or make sure he’s not getting more than I did). We see and hear so many things that make us question what can we believe. Leaders (both religious and public officials) have let us down abusing their authority by lying to their people…families experience broken-ness as parents aren’t faithful to one another or to their obligations to their kids which leaves us wounded and untrusting

That’s what we mean when we say that the Gospel is “good news” That Jesus came to us and His mission was to fulfill the Father’s will that none should be lost – that all of us should be saved. He’s not living by our broken human standards that 99 out of 100 is excellent – far above expectations – he is interested in the one… You. Me. Each and every one of us.

How do you feel hearing this right now?

Perhaps you are one of the rare lucky ones who has a good grasp on this gospel message. The reality is, understanding God’s amazing love isn’t exactly easy for us. There is so much broken-ness that we see around the world – here we are on the 15th anniversary of 9/11 – a day filled with emotion, images, painful, painful memories that despite the beautiful stories of courage, selflessness and sacrifices, it’s hard not to focus solely on the brokenness of the world. There’s brokenness in our families, and in our own lives, and with all that, we’re fortunate if we catch glimpses of true love offered and received sincerely and are able in faith, hope and love to realize that these are just glimpses and that the fullness God’s love won’t be possible till we see Him face to face.

Maybe you feel undeserving of God’s love. Sadly, there’s a whole lot of us who probably are in that same boat with that too. And if you are, it’s good to remember that there is no one on this earth that deserves it. That’s not the point. 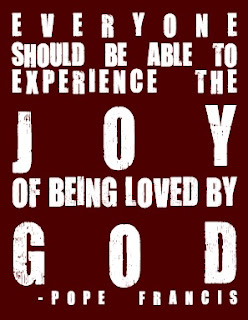 The point is He does.

That’s one reason that on the shirts this year of our Student Leaders, our Focus missionaries and the rest of the staff here at Newman, we picked the quote by Pope Francis “Everyone should be able to experience the joy of being loved by God.” As the Catholic Christian community here at Montclair State, we strive to do that each and every day in countless ways. We know we’re not perfect… we’re all sinners… we’re all in need of God’s love and mercy. And we come together to remind one another of His promises. We come to share our experiences of how our lives are transformed by our responding to God’s promises. We share this tremendous good news and continue to proclaim the Gospel through sharing our very lives on this campus. So that each and every soul has the opportunity to come to know how God our Father is desperately, longing, looking for each one of us – that he might embrace us and know how there’s nothing He wouldn’t do to save us – now and for all eternity.