Hi everyone, here’s my homily for the 23rd SUNDAY OF ORDINARY TIME – September 4, 2016.   The readings for today’s Mass can be found at: http://usccb.org/bible/readings/090416.cfm  Thanks as always for stopping by to read this blog, for sharing on Twitter, Facebook and Reddit.  Have a great week!  God Bless – Fr Jim 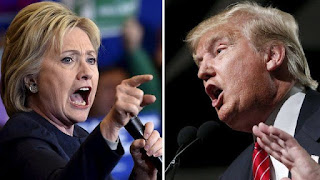 So we’re about 9 weeks away from Election Day. God Help Us – literally and figuratively. It’s an amazing thing that these campaigns have become – more and more – a media circus, rather than a more sober, intellectual, discussion/debate about issues, positions. A process where as citizens we gather to share our concerns, our differences and try to come together to see who would serve us best. Instead it seems more and more we hear about polls; stories of optics or visuals and how they are moving the polls; campaign ads and how they effect the polls and so on.

Interestingly though, is how the media will spend some time talking about each candidates faith. It’s interesting because so often the same media will try to marginalize people of faith or discredit it. But for a variety of reasons, there’s no shortage of stories about the candidates and their faith. Just a variety of headlines from the last few weeks that I’ve seen: “Hillary Clinton gets personal on Christ and her Faith;” “Donald Trumps ‘born-again’ conversion to Christianity” “Mike Pence’s journey from Catholic Democrat to Evangelical Republican.” “A Pope Francis Catholic, now that Tim Kaine is Clinton’s VP pick will his faith matter?”

Whatever the political leanings each of us has, its curious that so many media outlets would do stories like these. Particularly as Americans where this mis understood notion of separation of Church and State went from a phrase Thomas Jefferson used to explain the first amendment saying Congress shall make no law respecting an establishment of religion, or prohibiting the free exercise thereof to the mistaken belief held by many that any discussion of religion or faith in the public square is forbidden. Religion and politics here in the US is a difficult thing to navigate.

In any event, I always find it interesting when stories do emerge about politicians or celebrities and their faith, their religious convictions (or in some instances their lack of). Because hopefully it makes us take a look at ourselves as we read these profiles and perspectives. To ask ourselves What makes a Christian a Christian? What makes a follower of Jesus Christ a disciple? Does my simply saying “I’m a Christian” make me one? Is it when I fill out a registration form to a particular parish or Church? As Catholics, we know that being Baptized, Confirmed and receiving the Eucharist are essential, but is that enough? There’s a lot of people who went through those sacraments that don’t seem to be very interested in Jesus Christ…

In today’s Gospel, Jesus seems to be hitting that issue pretty directly. At the start of the passage, we hear that there’s “great crowds” of people who’ve been traveling with him. If we were to be able to time travel and come upon the scene there and see these groups of people all walking behind Jesus, more than likely we’d assume they must be followers of his. Yet, with a closer look, in that crowd are people who would betray him, plot against him, deny even knowing him, even shouting for his death.

Jesus knowing their hearts (as well as ours) realizes this, and makes it clear that simply being in his presence or in proximity to him does not make them (or us) a follower. Nor does being able to identify Him or recognize Him for who He is, the Son of God, the Savior, the one sent to redeem us make us a disciple.

Oh, that’s all that’s required, phew, I thought it was difficult!

That’s pretty demanding stuff. It’s hard to even consider that Jesus is asking us to “hate” anything as a way of showing our love. It’s hard to consider that Jesus is asking us to suffer the weight of a Cross to demonstrate our following Him. Especially since I do love my family, I do love my life. And I try to avoid suffering at any costs (first sign of a headache I’m popping Advil)

Jesus isn’t telling his followers to go and break all of our family relationships saying “Yeah I hate all of you”, nor run out of here saying “OK How Can I suffer today” (“YIPEE!”) He’s basically saying, to truly come to Him, we need to recognize who He truly is. And if we really believe that He is who He says He is – then there’s no way that He can come second to anyone or anything.

we have to love Him even more than even those we love the most on this earth.

We have to be willing to endure being mocked at by those who don’t believe.

We have to suffer with the crosses that come when we decide to live the life He’s calling us too when many in the world around us seem to be going in a very different direction.

Because to be selfless as Jesus is. To care about the poor, the lost, the sick and the dying when people are stepping over those individuals to make sure they don’t end up in the same spots (which, inevitably, as people of this world – we all will eventually) threatens the “balances of power” in the world. When Jesus did these things, they killed Him. And those of the world continue to be threatened by the name of Jesus and his radical Gospel.

That’s some stark realities to be faced with. The thing is, the crowd initially start following him because they were fired up. They saw some pretty awesome miracles. They heard some tremendous preachings and teachings. Something drew them to Him. But fear entered in. Maybe they went home to their Mothers and Fathers; their husbands and wives; their brothers and sisters and when they told them what they saw, what they experienced, what there hearts felt when they were in Jesus presence they were laughed at. Maybe when they went to work or school and people asked them “where were you today” and they told him they spent time with Jesus they got suspicious looks, passed over for jobs or positions of honor. And they couldn’t handle that. They were upset with those reactions. So they ended up being part of the crowd that had travelled with Jesus, but didn’t become a disciple.

Something continues to draw people, draw us to Jesus. Something within us knows that He’s different. Knows that he heals the worst fears the turmoils that we experience in those dark nights of our souls. Knows that He touches our hearts and minds and taps into the deepest longings (promising us eternal life can do that to people who’ve seen and experienced death). And He continues to call out to us, inviting us to go deeper, drawing closer, trusting Him more. Calling this community to gather, to come and hear His words, experiencing the miracle of His presence in the Bread and the Wine becoming His Body and Blood – so selfless is He that He’s not demanding us to be obedient to his demands or else, but nourishes us with Himself when we chose to.

What makes a Christian a Christian? It’s somewhat easy to speculate, and debate that question as we’re holding the people running for elected office or any public person up for scrutiny whether they truly are a Christian or not. Yet, Jesus’ answer to that question – as he looks at you and I leaves us with a different one – are we ready to claim that we are?