Hi everyone, here’s my homily for the SOLEMNITY OF THE ASSUMPTION OF THE BLESSED VIRGIN MARY – August 15, 2016. The readings for today’s Mass can be found at http://usccb.org/bible/readings/081516-mass-during-day.cfm  Thanks as always for stopping by to read this blog; for sharing it on Facebook, twitter, Reddit and elsewhere on the Internet – and for all your feedback and comments.  God Bless You and Yours and have a great week! Fr Jim

Quick commercial… thanks to everyone who’s helped with the NEWMAN CATHOLIC 2016 SUMMER APPEAL – Today we  hit almost 50% of our $20,000 stretch goal for this year… Please check out our website for information:  http://www.msunewman.com/#!appeal/cbjb  We appreciate your consideration and your support! 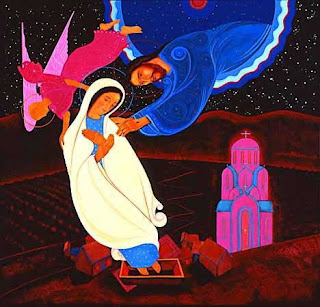 Rarely do I get into history lessons for homilies – but this celebration of the Assumption of Mary- where we celebrate that at her death, Mary’s body and soul were taken up into heaven – is one that sadly divides some Christians (it’s not in the bible they argue, so it cannot be true!). But the Bible is not the only authority on these subjects. There’s also the ancient history and the early oral tradition of the Church that tells us all kinds of things that aren’t recorded in scripture. (Like how St. Peter, St. Paul were martyred, where they were buried in Rome…)

In this case, in Jerusalem near Mount Zion in the early centuries of Christianity, there was what was known as the Tomb of Mary also known as the “Place of Dormition” – or where she fell asleep. When the emperor of Constantinople in the year 451 asked the Bishops who were gathering for the Council of Chalcedon (which was a worldwide gathering of all the Bishops of the Church like Vatican II was in the 1960’s) he had asked if relics of the Blessed Mother could be brought there so that they could make a shrine for her. The Bishop explained Mary had died in the presence of the apostles; but her tomb, when opened later was found empty. All that was found in there were flowers of lilies and roses – and so the apostles concluded that the body was taken up into heaven.

There are other recorded ancient events that also bore witness to this that in 1950, Pope Pius XII proclaimed the Assumption of Mary a dogma of the Catholic Church in these words: “The Immaculate Mother of God, the ever-virgin Mary, having completed the course of her earthly life, was assumed body and soul into heaven.” Effectively making an ancient belief Catholic doctrine and the Assumption of Mary considered a declared truth revealed by God.

With all this in mind, we come together not to commemorate a historical event or gather for an apologetics lesson. But to use this past event to see what God is doing in the present and the future. Looking to Mary for insights on our relationship with God.

And reflecting on this Gospel reading, it reminded me of a story that one of my former High School teachers shared. It was a somewhat surprising, as well as sad occurrence, that seems to get repeated each and every start of the school year. He would ask his students to take a sheet of paper and divide it in half. On the left side he said “I want you to write down all your gifts, all the talents you have… things that you’re really good at.” After a few moments he said, “on the right side write down all the things you want to change about yourself, things that you’re not good at, things your embarrassed about.”

The sad reality was that he would often have to stop the students writing the second list. That 9 times out of 10, the things they want to change list far exceeded the things they were grateful for list – sometimes even continued on the back of the paper. Truth be told, I’d probably fall into that majority group myself and I suspect a lot of you would to. For a variety of reasons, we seem quite able to see the negatives of ourselves, the failures, the sins so much easier than the unique, special tremendous gifts that God blesses each of us with.

There’s probably a lot of different reasons for that: some have a poor self image of themselves. Some get caught up in sins of jealous or envy where they constantly make unhealthy comparisons of themselves to others. And for some, this mistaken understanding of being humble where they put themselves down to the point of being dishonest takes hold to the point that they are really embracing a “false humility.” 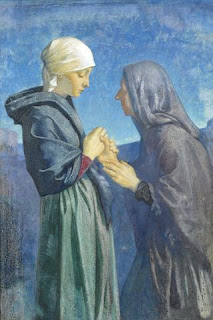 In reading this Gospel today we have quite a contrast to those behaviors… Mary and Elizabeth have both had some pretty miraculous things occurring, some divine conversations. Elizabeth pregnant with John the Baptist who will become the prophet heralding Jesus coming. And Mary, bearing Jesus Christ in her womb.

Imagine Elizabeth writing her own list on why she shouldn’t have a child? The gospel tells us that Elizabeth was older when she had conceived John the Baptist. She was called “barren”. Her list of negatives probably would have said “I’m too old to have a child now.” “My husband, he’s a good man, but he’s not going to believe this [he didn’t in fact, which is why he is silenced by the angel until the birth of John].” “I’ve been infertile, barren, for so long… surely there could be someone better.“

Mary could write her own list too. Quite the opposite of Elizabeth “I’m too young!” “People are never going to believe what is happening” “Surely there’s someone else who is better suited or prepared to be a Mother for this special son.”

While all of this is conjecture, it’s not unreasonable for us to imagine that some of these thoughts had to have crossed the minds of these important women. Which is what makes the wisdom that comes from age spoken by Elizabeth to Mary that much more dramatic and important. We almost miss them – there’s so much going on here:

Blessed are you who believed that what was spoken to you by the Lord would be fulfilled.

Those words of insight gives way to Mary singing a beautiful hymn, that the Church prays daily called the “Magnificat”- a song that very simply contains the hopes and prayers of the Old Testament grounded in the reality of Mary’s vision: where God is ruling all things with perfect power and wisdom. She can rejoice in God because she has rejoiced in all that God has done and will do in her own life.

Mary and Elizabeth give witness to us of two women who don’t believe the lies the world would put on them about their situations; who don’t allow truths or facts about themselves get manipulated to where they become filled with fear and doubt that they stop believing all that God had told them. Instead they are grounded in the reality of seeing themselves as God sees them.

With their example, Elizabeth and Mary come to us and ask – What is God speaking to you right now? How is he trying to do something new in our lives or in the lives of those around us through our ‘yes’ to Him? How is he asking us to trust Him that He has equipped us with the gifts, the talents the abilities to accomplish whatever it is that is going to give birth to Jesus Christ in this day and age? How is he asking us to believe in Him, have faith in Him and not be deterred by the lies of the world or the lies we tell ourselves that we’re not worthy, we’re not able, we’re not good enough.

May we too be called “blessed” to see ourselves as the beloved sons and daughters that God created us to be, and follow Mary’s example, believing in all that the Lord is speaking to us will be fulfilled.