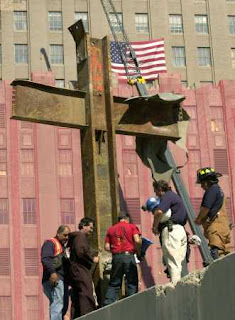 After September 11th, it was observed that for some people around the country, they didn’t feel the same emotional impact as those of us living in the New York Metro area.  That’s not meant to sound judgmental or have some sort of claim on what was the worst terrorist attack in American history.  It’s simply the reality.  Those who were killed were our relatives, our friends, our neighbors.  Those fighting to rescue and save them came from our communities.  The twin towers weren’t sites that we visited on a sightseeing trip – they were apart of our daily landscape.

It was an unwanted education.  Before that fateful day, seeing and hearing of other atrocities that had occurred around the world where “hundreds were killed, thousands were injured” – there was something anonymous about it that made it unreal.  September 11th was very real.  Speaking for myself, I know I’ve never been the same.    Every fall, the calendar feels different.  The names of the men whose funerals I concelebrated immediately come to mind (though I never knew them before).  The New York City skyline, visible from our Newman Center – while in one sense is a testimony of how we were resilient in “rebuilding” – the “Freedom Tower” to me still doesn’t look right and remains a daily reminder of what we lost in the horror of that day.  I still can’t bring myself to see the September 11th memorial.

Today July 26th I feel similarly.  I didn’t realize that at first, when I just heard short headlines, brief reports:  ISIS attacks at Normandy Church; Priest killed at Mass.  Later getting a fuller picture of the true horror, it’s rocked me in a way I haven’t felt since September 11th. 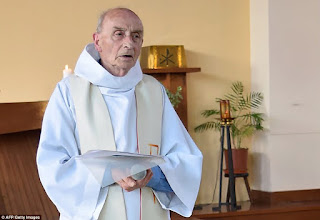 Father Jacques Hamel, an 84 year old priest, was filling in for the local parish priest at Saint-Etienne-du-Rouvray Church in Normandy, France.  He was celebrating the daily Mass for the parishioners who were, just like Catholics all around the world, honoring the grandparents of Jesus, the parents of Mary – Sts. Joachim and Ann.  That’s when two ISIS terrorists burst in, wielding knives.  Congregants; turned Hostages; thankfully now turned witnesses say that Fr. Hamel tried to protect his people – a crowd that included nuns, lay people who had gathered to hear God’s word and receive Jesus Christ in the Eucharist.  Fr. Hamel was forced to his knees, beheaded before the congregation, while the terrorists went on an angry rant spewing their hate before being gunned down themselves.

It doesn’t take a therapist to explain why it would hit somewhat personally.  Mass is not simply something “we do” it’s essential to who we are as priests.  Mass, the Eucharist is that essential to us as Catholics that it is offered every day (sometimes multiple times a day) throughout the entire world.  So it’s not uncommon that when one of us is away on vacation, on retreat, and is away from our local assignment, we have another brother priest “fill in” for us.  So technically, the people of St. Etienne-du-Rouvray’s Church weren’t his people –  But they became his people as he put on the same vestments, putting the ribbons in the pages of the same Roman Missal; checking that the scripture readings were turned to the same readings that millions of us priests were all doing around the world this very day – July 26th.   He was helping a brother priest out by assuming his daily responsibilities.  Fr. Hamel had come to stand in the person of Christ.  He was there to offer Jesus’ once and for all time sacrifice on the cross, making it real to those gathered… never imagining that he would be called to lay down his life literally after decades of doing so humanly, spiritually, emotionally as a priest.

There will be plenty of ink about ISIS; political pundits will weigh in and assess the impact this attack will have in France, in Europe and the world over… sadly I suspect more blood will be shed at the hands of terrorists and in response to them.  And when I allow my mind to go in those places, I feel the same anger, the same fury I did on September 11th.    Tonight, I’m reflectively wondering how faithfully, how fully do I live out the promises I made on my ordination day – when I became a brother priest in Jesus Christ with Fr. Hamel?    Even more, as has become custom, there was a hashtag that was trending where people reflecting on the tragedy and solidarity with this simple parish priests said – ‪#‎IAmJacquesHamel‬.  For me, I wonder if I would I ever be able to “fill in” for Fr. Hamel?

Eternal rest gant unto Him O Lord, and let the Perpetual light shine upon Him.  May He Rest in Peace – and Pray for all of us, especially his brother priests – that we be as selfless in our sevice of Christ and His People.