Hi everyone, here’s my homily for the SIXTEENTH SUNDAY IN ORDINARY TIME – July 17, 2016. The readings for today’s Mass can be found at http://usccb.org/bible/readings/071716.cfm  Thanks as always for stopping by to read this blog; for sharing it on Facebook, twitter, Reddit and elsewhere on the Internet – and for all your feedback and comments.  God Bless You and Yours and have a great week! Fr Jim

Quick commercial… as we enter into Summer, it’s time for the NEWMAN CATHOLIC 2016 SUMMER APPEAL – please check out our website for information:  http://www.msunewman.com/#!appeal/cbjb  We appreciate your consideration and your support! 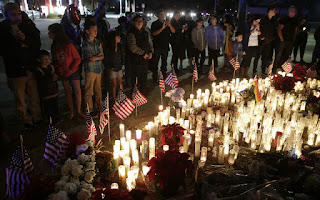 Last December, after the terrorist attack in San Bernardino which left 14 people dead and 22 injured, which was horrific enough, sadly there was an ugly episode that followed among politicians, celebrities, and media – on social media.

In the immediate aftermath, a number of individuals in the public eye simply shared the sentiment “Thoughts and Prayers” to the victims and their families.  Which somewhat shockingly received a backlash.  “GOD IS NOT FIXING THIS” one NY newspaper had on their cover as they angrily argued that the attack was the fault of not having more stringent gun control laws.  This wasn’t the first time that praying was demeaned.  In the wake of other terror attacks, like the ones in Paris last November, when the phrase and image #PrayForParis was trending, some media outlets pushed back with images saying “Don’t Pray for Paris – Religion caused this tragedy in the first place.”  When the terrorist attack occurred just a few weeks ago in Orlando, killing almost 50 people, one late night TV host sarcastically responded to the call to pray for the victims and families -The biggest, most helpful thing you can do to ensure this never happens again is sit quietly in a room with your eyes closed, talking to nobody.

An article, which appeared in The Atlantic – after the San Bernardino attack called these responses “Prayer shaming” – which they explained was when one side seemed believed they were more caring because they were advocating doing something, taking action – while the other was in their opinion offering meaningless prayers.

There’s probably many reasons that this is happening.  The most obvious that some point to is that we are living in an increasingly secular/non religious society is one.  But even more likely, the fact that there has been more and more violence, evil, killing in terrifyingly extreme ways has left many scared and angry.  So there’s this frustration that we want to immediately see some action.  And we see it from every political angle one side wants the violence to end by demanding we “Pass new gun laws” the other side responds “Bomb them…” or that we need to “take the fight to them…”

I’m not getting into those different viewpoints.   Not because these, and many other serious issues don’t need to be discussed and important responses on how best to protect people enacted.  These discussions, debates, politics – they’re all important.   it’s understandable that as we feel more vulnerable and angry the calls for someone to do something – anything begins to get louder.  We see, yet another horrific terrorist attack Thursday night, with a man driving a truck into innocent people simply out enjoying the fireworks on Bastille Day in Nice France – leaving another horrific toll of those killed, those injured – and countless numbers of people who’s lives have been shattered once again.  And our frustration, our impatience grows as do our fears over what next?  There’s that impulse within ourselves to do something.  And sadly, prayer seems less and less a priority. 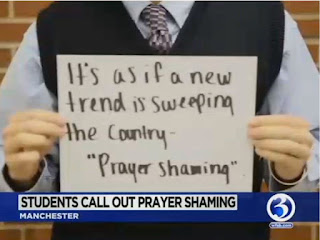 But one of the points that The Atlantic article so accurately made in their article on Prayer Shaming was that Prayer and political action have a deeply entwined history in America. From civil rights to women’s suffrage, nearly every social-justice movement has had strong supporters from religious communities—U.S. history is littered with images like the one of pastors and rabbis marching on Selma, side by side with political activists.

Prayer and actions shouldn’t be seen as mutually exclusive things.  Nor do they need to be competing activities.  Like if you’re a person of faith that you can’t be in favor of gun legislation; or that a member of the military who is out in battle isn’t prayerful.  But for some reason that seems to be a mentality that some have loudly argued is the case.

This debate between doing something and praying isn’t a new one… as we heard in today’s Gospel. This classic episode of Jesus coming to the home of Martha and Mary.  The encounter is often described as a metaphor of one who is active (Martha) and the other contemplative, prayerful (Mary) On the surface, Martha’s working her tail off, trying to be a good host, Mary’s simply enjoying being with Jesus; and when Martha’s overwhelmed by the tasks and complains to Jesus, he seems to side with Mary, the “slacker” in the story.

But it goes a lot deeper than that. Jesus isn’t judging the tasks or the work that either sister is doing. He’s not unappreciative or dismissive of Martha’s contributions or even saying that Mary’s doing something more important when he says she has “chosen the better part.”   Jesus is speaking of what is going on in each of these women’s hearts. Martha has made a judgement about Mary’s responsiveness to the Lord as less important than what she’s doing. She’s determined that Mary shouldn’t be doing what she’s doing and she’s become bitter about it to the point of complaining openly about it.   In doing so, whatever generosity of spirit Martha may have had is pushed aside as she goes about her tasks, more and more frustrated that Mary hasn’t offered simply to help her (I wonder if Martha even thought to ask for help or had she simply expected Mary to read her mind and offer to help her?) Perhaps as all of this was going on Martha might have forgotten who it was she was busy preparing the meal for in the first place – that Jesus was right there in their midst.  That lapse causes her to become judgmental and critical kind of ruins the atmosphere.  Rather than Jesus being welcomed into their home and experiencing true hospitality, being welcomed, attended to and responded to in appropriate ways, he ends up mediating between the two.

That’s what evil does.  Turns people against one another.  Sure in this Gospel encounter, it’s a momentary lapse that Jesus gently corrects and the sisters are reconciled (as they will both be looking to Jesus later in the Gospels when their brother passes away).  But I can’t help but think that as we are facing so many incidents of diabolic evil inflicting such brutality and chaos on the world – that one of the devil’s bigger successes is turning us against one another.

For us to confront the great difficulties of our day, the evil that is unleashed in violence, terrorism, extremism – we as Christians need both – we do need to act, we do need to protect, we do need to examine laws and policies on a whole host of fronts that seem to be playing out in dramatic, violent ways all at the same time. 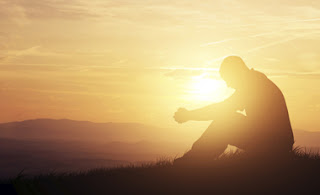 But the foundation for that is sincere, deep, genuine prayer.  And that means it’s not enough to simply tweet “PRAYERS FOR (insert latest tragedy)”.  We have to actually do that.  Connect with the Lord in our prayer.  Prayer which opens us to hearing and responding to the Holy Spirit’s promptings; Prayer which keeps me open to the Word of God; Prayer that is attentive to that which is good, which is beautiful, which is just.  Prayer that is loving, that is focused on those who are suffering and in need.

A few months ago, Pope Francis, on the feast of Sts Peter and Paul, preaching to a gathering of new Archbishops, being sent to their various Archdiocese’s around the world, emphasized the need for prayer in the face of difficulties, of trials, of persecutions, of evils.  He said:
Fear paralyzes us, it always paralyzes us; it makes us close in on ourselves, closed to God’s surprises… Prayer enables grace to open a way out
from closure to openness,
from fear to courage,
from sadness to joy.
And we can add: from division to unity.

Our being here is an important first step.  To hear God’s word, to receive Jesus’ Body and Blood in the Eucharist – as Catholics, this is the foundation of our faith lives, our prayer lives.  But if you’re like me, it’s easy to run out from Mass and get consumed by the day to day challenges, obstacles and try ourselves to fix, to mend, to heal, to attend to each and every need we encounter.. . without first pausing for a moment, and connecting with the Lord, asking Him to direct our words, our actions.

A priest one time said to me when I had lost sight of how much emphasis I was putting on fixing a couple of different problems saying to me “We already have a Savior and you ain’t Him”.  And he was right.  I laughed and said “yeah I guess the best I can say is I’m one of Jesus’ customer service reps… and it’s my responsibility to tell him he’s got a problem call on Line 1, 2, 3, 4… – and what if anything he’d like me to do about it.”   Probably not the most eloquent or pious of images – but it’s an image that works well for me.  And keeping that image in mind, when I look at the boss – Jesus that is – and recognize he always prayed, especially before doing something big, then it’s important for us, His followers to as well.

God moves through prayers… He loves us and desires to give the best gifts to us.  In a world that seems spinning out of control, where evil is on the move in dramatic and frightening ways, may you and I continue to reach out to Him, who has promised He will never leave us as  orphans with no one to run to.  He is here for us… always.  Amen.