Hi everyone, here’s my homily for the THIRTEENTH SUNDAY IN ORDINARY TIME – June 26, 2016. The readings for today’s Mass can be found at http://www.usccb.org/bible/readings/062616.cfm  Thanks as always for stopping by to read this blog; for sharing it on Facebook, twitter, Reddit and elsewhere on the Internet – and for all your feedback and comments.  God Bless You and Yours and have a great week! Fr Jim

Quick commercial… as we enter into Summer, it’s time for the NEWMAN CATHOLIC 2016 SUMMER APPEAL – please check out our website for information:  http://www.msunewman.com/#!appeal/cbjb  We appreciate your consideration and your support! 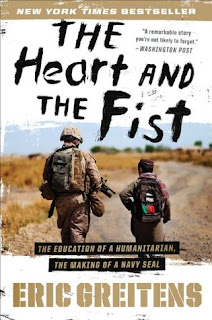 HOMILY:
A couple of years ago, an author visited Montclair State University to speak about his new book.   Just the title was intriguing – “The Heart and the Fist: The Education of a Humanitarian, the making of a Navy Seal.”  The author, Eric Greitens  had studied  at some incredibly prestigious institutions like Duke and Oxford.  He became a Rhodes Scholar, then spent time outside of the classroom on mission experiences that brought to places of great need like Rwanda and Croatia and then decided that he wanted to become a member of one of the most specialized military forces – the United States Navy Seal.  It was definitely one of the most unique stories, journeys that I’ve ever heard.  He gave such an incredible presentation that even though I have a pile of books that have collected dust and not been opened, it just seemed to be a “must” read.

One thing that has always fascinated me – whether it’s the SEALS or the Marines or some other elite military group – is what these individuals endure physically and mentally to complete their training.  To have that something it takes to become a SEAL.  They go from some minimum goals like having to complete a mile and a half run in 11 minutes to doing some seemingly impossible, grueling and increasingly difficult challenges for 12 weeks of training, culminating in the appropriately named “Hell Week” in order to become this warrior.  It’s something few will succeed at.  I think Mr. Greitens said that his class started with 200 candidates — in the end only 21 would graduate. And Greitens was able to pinpoint the reason,  the difference between those who would make it and those who wouldn’t.   While obviously a person needs to be in good physical shape, the biggest thing was the person’s mind.    The thoughts, the mental toughness of the candidate would ultimately determine if they had the mindset to go all the way.

He shared an example from “Hell Week.”  That is the week – which is make or break time – the instructors work the recruits non-stop.  They get something like 3 hours of sleep the entire week – while undergoing all kinds of tests: Running, swimming, experience terrible extremes in weather.  They endure a “Drown Proofing” exercise where their feet are tied together, their hands are tied behind their backs – and they are expected to swim fifty meters like that, retrieve a face mask from the bottom of the pool with their teeth, and bob up and down a bunch of times. Throughout this entire week, they can quit at any time – which is something their instructors remind them of constantly.  In fact they make it very easy for them.  There’s a bell mounted outdoors, right near where they candidates are training.  That bell is visible throughout this entire experience that at any moment, they can just go and ring it, and they’re done…

This one particular day they had just finished one of these torturous exercises.  The men were exhausted and struggled to remain standing at attention.  At that, the instructors said to them, “OK the next thing we’re going to do is have a nice 5 mile run, so you can go grab your gear, and lets move out.” At that, Mr. Greitens said you heard “DING” – one guy quit; and then another “DING” – and then several more “DING’s”.    That one afternoon was the moment where they lost the most guys at one time than at any other time that week.  Moments after the last guy quit and was walking away, the instructor looked at the remaining candidates and said “Just kidding, let’s go have lunch.”

Can you imagine?  I know, that would’ve been me – one of the dings would’ve been me (probably a lot sooner than that if I’m really honest).  I kept picturing the last guy ringing the bell, just starting to walk away and hearing the “just kidding, let’s get lunch” and thinking “that would be me.”  It sounded just so cruel.  But Greitens said that epitomized this essential part of this whole test.  It’s part of this process… those guys at that moment they showed they didn’t have the mindset of a SEAL.   Because the thing that made the difference was that those who quit at that point weren’t even willing to take one step on that 5 mile run – weren’t even willing to give it a try.  They had made that decision completely in their minds that they couldn’t, they wouldn’t even attempt to go any further.  Once they had done that, there wasn’t anything else that could be done.

It’s just another example that – What you think;  how you think; is one of the most important factors in determining who you are.  That’s not just a truth in becoming a Navy Seal, or in our personal lives, but it’s a truth in the spiritual life as well.

That came to mind looking at today’s Gospel.  Jesus sounds tough today.  Harsh even:- Foxes have dens…birds have nests… the Son of Man has noplace to lay his head …

– Let the dead bury their dead …

– No one who sets his hand to the plow and looks to what he left behind is fit for the kingdom of God. 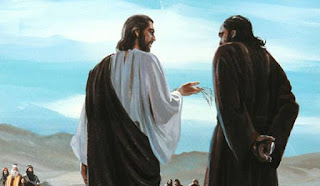 But if we look closely, Jesus is being clear, honest, upfront about all that’s required in following Him.  It’s not just enough to let our hearts buy into a romanticized notion of discipleship.  It’s a serious commitment with great demands.  So we need to be clear, to get our minds right…

-Are we willing to give up security and sign on for the unpredictable adventure that comes when we set our feet on the path and follow Jesus?  That means our mind has to reject the natural impulses – that even foxes and birds have – of their instincts, their habitats in order to make the choice to let Jesus direct our paths, our agendas.

– Are we willing to risk the comfortableness of our lives – the relationships, the projects the plans, that we’re attached too when Jesus is calling us to something that upsets them?  Jesus telling the young man to “let the dead bury their dead” isn’t an insensitive response and an unreasonable demand made to a grieving son.  Most likely, the young man was saying I want to follow you Lord – but I have things to do, things to attend to here – once my father gets old and dies, then I will follow you.  Christ wants us to heed him without delay.

– Are we prepared to expect difficulties in following Jesus?  When you see fields of crops or flowers – you see the beauty of the finished project.  Rarely do we realize the difficulty, the dedication, the perseverance required to get those fields from seedlings to an abundant bounty.  Once we start pursuing Christ, it’s tough, it’s hard – particularly in a world that is growing increasingly hostile to Him, to His message, to His followers.  Jesus isn’t asking for a perfectly cultivated field but that we keep pushing, keep plowing with all that we have within us.

Very beautifully, in today’s second reading, St. Paul made the point that Jesus has set us free from the “yoke of slavery”; we’re to use that freedom to make a choice to be clear, unhesitating, unambiguous and whole-hearted in our commitment to be his disciple.  The work of establishing God’s kingdom of justice, reconciliation and peace has no time for “yeah but first…” “In a minute” or “on second thought”.  The Gospel is not some noble ideals we aspire to or words that we memorize – but a spirit we commit ourselves to; a mindset that we need to daily embrace, struggle with, work for.  When we struggle, when we get exhausted, when we feel ready to quit and “ring the bell”, we’re not to give up – but to call on one another as brothers and sisters to strengthen our resolve.  In those moments we do fail, we need to call on the Lord to experience his mercy, especially in the Sacrament of Reconciliation where we confess our sins, and they are forgiven and we start over re-committed.

May you and I have that mindset, recognizing that discipleship is not about being spectators of God’s presence -but rather a commitment to engaging in the hard work of building up the Kingdom of God, no matter the cost to us. Knowing that when we do, we’re following the one who always has us in mind, and always has our good in mind.