Hi everyone, this is my homily for the FIFTH SUNDAY OF EASTER – April 24, 2016.  The readings for today can be found at: http://usccb.org/bible/readings/042416.cfm.  As always, thank you for stopping by to read, for sharing this on Facebook, Twitter and Reddit and for your feedback and comments.  Grateful for your support!  God Bless –
Fr. Jim 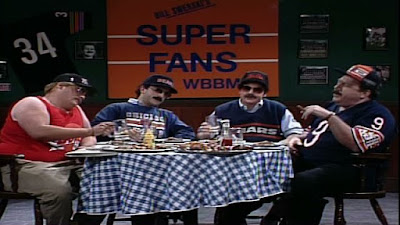 Saturday Night Live – probably about 20 years ago – had a recurring skit called “Bill Swerski’s Superfans.” It was a funny bit that was a parody of a bunch of the most stereo typical Chicago sports fanatics whose primary obsession was “DA BEARS”. They would be sitting in a kind of TV-news panel set up and obsessively talking about sports. What made it so hysterical was the extreme examples they portrayed: they would have debates about the impact Mike Ditka’s (one of the Head coaches at the time) haircut might have on the team. As loyal followers they would anticipate the most ridiculous of triumphs with ludicrous predictions “Da Bears will defeat the Giants 31 – 3… ” another time, one of the members of the panel predicted the Bears would win by a score of 31 to negative 7 and when pressed, “how does a team end with negative points” the response was DITKA’LL FIND A WAY…

They say what makes comedy work is when there’s an element of truth contained in it. Watching these semi-regular debates not only lampooning Chicago accents but how passionate people can get over a sports teams obviously resonates with all of us. Either we are one of those super fans or we know them… You can tell the difference about whether you are a super fan or a casual observer — The casual observer might know that the Yankees beat the Red Sox last night – the super fan will tell you that C.C. Sabathia was on fire shutting down the entire Red Sox line up with 24 strike outs and not giving up a run in 7 innings…and how this was similar to a game between the two clubs 20 years ago.

That’s not just true for sports… It could be anything. People get just as dedicated to other things – for example some music group you like: I like Mumford and Sons is a bit different from the super fan who has the super rare recording of a live performance that Mumford and Sons played in Nashville where they did an acoustic version with alternate lyrics to Hopeless Wanderer and can explain the differences to you in details you never really thought about. There are definitely fanatics for different Movies and TV shows — Star Wars fanatics who dress up in costume and wait for days to see the premiere of a film – People counting the days and hosting a premiere party for the new season of Game of Thrones is a little different than the person who just goes to the movies for a couple of hours for entertainment or tunes in to the show when they’re home the night it happens to be on. Whatever it is, it’s not hard to tell the difference between the casual observer to the true fan. 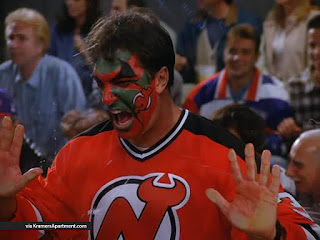 Whether being a super fan is a healthy thing or not, we can debate or discuss some other time. But the point is, when we are Really, REALLY passionate about something, people can tell. It transforms who we are, how we react, how we behave… (Just look at Superfans when their team loses, or that band announces a new tour coming to your town or when a sequel is announced.

Are we “Super Fans” of Jesus? Just hearing that, what are the images that comes to mind? Most likely we have a caricature or some really negative stereotype of what that means just hearing that question. Yet it’s an important one. If we think about all the things we get really passionate about… follow, discuss, share – then how does Jesus factor in with that in our lives? Often times we think we’re doing Him a favor just by showing up here on a Sunday night (when, true, many, many don’t)

In tonight’s Gospel, on this fifth Sunday of Easter, we kind of have this interesting flashback. Here we are, celebrating Easter, Jesus’ resurrection from the dead, but the setting, the scene of tonight’s Gospel is the night before Jesus’ crucifixion and death. We’re once again plunged back into the Upper Room at the Last Supper. There was so much that happened in those days, that last week of his life, that some things get lost in the drama, in the chaos, in the confusion. So in the peace, the joy, the glow of Easter season where we continue to reflect on the eternity-changing experience of Jesus being raised from the dead, the Church looks back at Jesus’ last days with new eyes. So as we do that tonight, we hear something essential to the life of being a Christian, of being a follower of Jesus, of truly being a disciple –


This is how all will know that you are my disciples, if you have love for one another…

Jesus makes it clear, what the difference between the mere observer, the casual, curious bystander and the “super fan” if you will. It’s not by how quickly we can recite a line from scripture, with correct citation of book, chapter and verse number that will demonstrate to the world that we are disciples… It’s not in how promptly (and often times harshly) we are able to point out to others how wrong whatever it is they are doing truly is. It’s not how many rosaries or hours of prayer we offer. It isn’t even how many people we can convince to come to our events, our service projects, our services — as important as all of these things are — that Jesus is interested in. He gets to the basic, core point – do we love one another.

This wasn’t a new teaching… Not by any stretch of the imagination. Jesus had said, lived, demonstrated that over and over and over to his chosen 12. Yet here in the Upper Room, the night before he dies, as he is in a sense giving his “last words” before his crucifixion, they take on greater weight. No talk of miracles, no remembrances of great crowds or tremendous feats. He cuts to the heart of it and says – the world will know you are my disciples if you have love for one another. 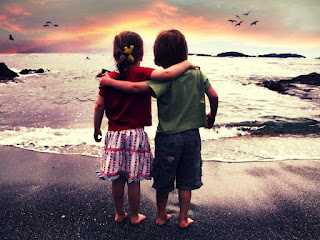 We often project to a more universal, general manner. Which lived out here, at Newman Catholic – has given birth to some great mission trips, tremendous community service activities whether it’s Habitat for Humanity; Soup Kitchens, even social-justice movements: where as Catholics we’re talking about Immigration, Environmental issues, the protection of the unborn… But I think we can use all that to kind of deflect from what else Jesus is saying. Reflecting on this, I can’t help but think Jesus wants us to be more personal, more immediate, more local.

Think about it, when he was first speaking these words, he was talking to 11 (Judas had just left to do what he was going to do). Jesus knew it was going to be hard to be a follower of his… Especially in light of what would happen in the days to come. How easy it would be for them to all turn on each other –

PETER HOW COULD YOU?

WHERE WERE YOU THOMAS?

WHO ARE YOU TO JUDGE…

Jesus’ love and mercy anticipates their failures to Him. And He forgives them both from the Cross and on Easter Sunday Evening for those failures (and surely many others not recorded in the Gospels). But he wants them to be sure that they forgive themselves, and forgive each other… He wants to make sure that they don’t let those human emotions, those fingers pointing at each other to distract, deflect, diminish what He has done for them, and demonstrated for them.

So here it gets uncomfortable, as it gets even more personal. Look around this room… Do we love one another? When people pass by, or visit us for the first time, or observe us -not just this hour or so we gather on Sunday, but as we walk out of here. Would they be able to see us “loving one another?” Would we be described as Jesus’ super fans, disciples?

That doesn’t mean people fake friendship and phony smiles.  Love doesn’t mean we are best friends with someone or share the same interests or even necessarily like someone… When that is the case, Love is easy.  When it’s not the case, when we don’t see eye to eye, when we don’t share the same interests, when we don’t get along, Love is work…  And so maybe we start out with something simple like, I don’t walk out of Mass and an hour later mock or gossip someone that was sitting three rows away from me.  We shouldn’t do that to anyone, to be honest, but if after sitting together, hearing Jesus speak His word to us; putting His very body and blood on our tongues and consuming him and then walking out of here and gossiping about one another (and even more horrendously lying to ourselves that somehow that’s being done out of concern) or we like a post that puts down someone else – then what chance do we have in being loving, being Christ like, demonstrating our super fandom for Christ to a stranger? If we can’t get this right my brothers and sisters… if we can’t get serious about what it truly means to love one another – then we’re merely a social club who tries to do nice things that make us feel good (and self-righteous at the same time about how great we are)

If we’re honest, we know we could do better… Should do better… Perhaps much, much better. And the temptation to make excuses, justifications, or outright dismissals to our sometimes scandalous treatment of one another will always be there.

Jesus isn’t interested in any of that. He speaks urgently, lovingly, honestly to us. Imploring us to enflame the fire of faith in one another and the world around us by taking that risk to be bold, making that step to be sincere and authentic, trying to become one of his super fans as we begin that difficult step of loving one another.