Latest News
Home /Blog/“I’VE GOT YOU”

Hi everyone this is my homily for PALM SUNDAY OF THE PASSION OF THE LORD, March 20. 2016.  The readings for today can be found at http://www.usccb.org/bible/readings/032016.cfm.  Thanks for stopping by and reading this blog;  as well as all your shares on Twitter, Facebook, Reddit, etc.; and your feedback and comments.  I’m grateful for all your support.  Have a Blessed and Meaningful Holy Week – Fr Jim

Shannon Johnson and his colleague, Denise Perazea are two names that probably aren’t very recognizable to us, which is understandable.  Being employees for a County Public Health Department in California doesn’t usually draw much attention to us sitting here in New Jersey.  Back in December, these two ordinary people were having an ordinary day at work, even having as ordinary a conversation as you’d expect in that environment, as Denise recalls:  We were seated next to each other at a table, joking about how we thought the large clock on the wall might be broken because time seemed to be moving so slowly.  Anyone who’s worked in an office building for a 9 to 5 shift can appreciate that sentiment… may have even said the same thing.

What made these two ordinary individuals noteworthy, is what happened moments later.  Two terrorists would burst into this office building in San Bernadino California, that fateful day this past December, unleashing a hail of bullets on all these innocent people, killing 14 people and injuring over 20 more people.  Denise took a bullet to her lower back, when Johnson scooped her up, brought her under the same table they had just been having their ordinary conversation at, grabbed a chair as a shield on one side, and then wrapping himself around her on the other, and uttering three words to Denise, which would be the last three Johnson would ever speak “I’ve got you.”

We often hear similar stories of such courage, bravery, selflessness in the face of immense evil 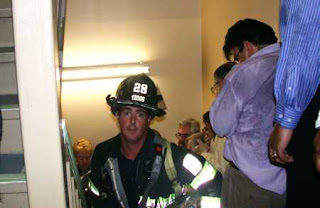 or horrific circumstances: in the thick of battles and wars, in the midst of criminal activities, in a terrorist attack, in a natural disaster.  And for most listeners it causes them to pause and reflect, “What would I do in the same situation?”   We like to think we’d be as courageous as that firefighter who goes in and rescues that person tapped in the World Trade Center on September 11th and somehow isn’t fortunate enough themselves to escape that horror… or as selfless as the soldier in Iraq who throws himself on top of an explosive device, sacrificing himself and saving his platoon … or as loving as Shannon Johnson who only thought to protect this injured woman with his very life… We like to think we are… and hope we’re never in the position to find out.

Rarely though, do we think about what it’s like to be the recipient of such acts of love: The greatest of love – the laying down of one’s life for another.  The emotional impact such a gift must make on the recipient, how such an act must cause a re-evaluation of priorities for that individual – how they live their own lives in light of this act of supreme generosity realizing that someone offered their very selves so that they could live.

We rarely think of it, again, hoping never to have to be in a situation like that in the first place. Forgetting.  .  .   we already have been.

Palm Sunday and this week we call Holy Week are meant to bring each and everyone of us face to face with that reality. We just proclaimed, and will focus this week on Jesus’ Passion where we recount his unjust arrest and trial, his brutal torture and execution on the Cross on Good Friday.  But we’re not meant to listen to this somewhat disinterestedly, as outsiders, recounting a horrendous story of what happened to an innocent man.  Jesus’ death meant something, means something to us here and now.   Selfishness, envy, greed, pride on the part of many had blinded people to the beauty of God’s love made real in Jesus Christ, kept them from hearing his life-giving words, from experiencing the fullness and endless life He was coming to offer humanity as He was crucified some 2000 years ago. 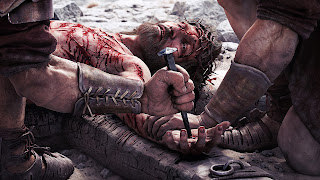 Sadly, the cycle continues. Our gossip, our betrayals, our vindictiveness and selfishness, our putting ourselves and our needs not only ahead of others but even at the expense of someone else – continues to cause separation from one another, from God.  Continues to demand justice, some sort of retribution for our sinful choices. Which is what this whole week is about, to “enter more and more into God’s logic of love and self-giving” (Pope Francis).  Where we proclaim His Passion, we come to His Cross to recognize He has suffered all of that for you and for me. He suffers and dies, he offers his very life for our sins.  The depth of His love is demonstrated on the Cross, the power of His love – greater than sin, greater than death itself will be revealed in the great feast of Easter next Sunday.  But for now, we are meant to focus on how Jesus laid His body over us and took the brutal and painful agony of Hell and kept us, keeps us safe.  He says I’ve got you… here and now and for all eternity.

This is our hope. How does that change our life and how we want to live it? Modeling a life of hope is the best sermon those who are lost will see.  Jesus saved you, will you allow sacrifice in your life to show hope to others so that they may be saved?  We are blessed to be a blessing. May we offer this gift of hope and see what God will do through our sacrifice.