Latest News
Home /Blog/NEWSFLASH: JESUS IS NOT OK WITH ADULTERY

Hi everyone, here’ s my homily for the FIFTH SUNDAY OF LENT – March 13, 2016.  The readings for today’s Mass can be found at: http://usccb.org/bible/readings/031316-fifth-sunday-lent.cfm .  As always, thanks for stopping by and reading this blog;  for sharing it on Facebook, Twitter and Reddit; and for your feedback and comments.  God Bless and have a great weekend- Fr. Jim 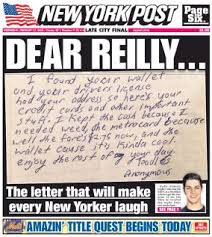 HOMILY:
So on the front page of the NY Post a few weeks ago carried the words in bold headline: “DEAR REILLY” with the sub headline: The letter that will make every New Yorker laugh. I like to laugh, so, I was curious to see the letter that this major newspaper found hysterical. The background to the story goes that Reilly Flaherty a 28 year old guy from Brooklyn had been out at a concert when his wallet was misplaced. About 2 weeks later he received a letter in the mail with the following so-called funny letter:

Dear Reilly – I found your wallet and your drivers license had your address so here’s your credit cards and other important stuff. I kept the cash because I needed weed, the metrocard because well the fare’s $2.75 now, and the wallet cause it’s kinda cool. Enjoy the rest of your day. Toodles – Anonymous.

Any of you who’ve heard me preach for some time know that I like to cut out stories; or save links of websites to different items that I come across that stick out to me for a variety of reasons. Some are inspirational, some are comical (intentionally or unintentionally) This one didn’t fit into any of those categories… It bothered me. Apart from it being (obviously) a slow news day, what was it that made this a front page story – A story that hundreds of thousands of people saw on their front steps, read as they drank their coffee, shared on twitter or facebook? What was it that resonated with the newsroom executives that believed this would resonate with their readers; even classifying it as funny – so much so that there was a follow up article the next day evaluating Anonymous’ handwriting? Because to me, the letter, & the behavior of the person known as Anonymous wasn’t funny…

Think about it. He (I’m not being sexist, the handwriting analyst said it was a dude) “found” Reilly’s wallet (I’ll give him the benefit of the doubt that he didn’t steal it). In his letter, he basically admits that he knew what the right thing to do was (return it intact). Instead, he chose to help himself to whatever it was that he felt absolutely entitled to. To assuage his guilty conscience he returns the items that were “important” (btw- at that point, 2 weeks later, one would assume Reilly would have cancelled his cards and gotten a new license…and should “anonymous” have used the credit cards, there might have been a way of tracking him, arresting him, charging him for several more crimes…so nice try, but again, that’s not the most noble of motives either) He then writes a somewhat honest confession where he doesn’t apologize for stealing the mans cash, metrocard or wallet in a semi-comical matter (because theft and weed use are funny) and then signs it anonymous, because despite this brazenness and arrogance, there’s a great deal of cowardice. Sadly because pick-pocketing and such aren’t rare, the perceived small act of goodwill from this self-centered man seemed comical to the NY Post. But if you read the entire article, and got to the point where Reilly summed it up like this “it speaks to the New York mentality: I’m going to be nice, but there’s going to be an asterisk” – you can’t help but think … this guy, Anonymous isn’t funny, in fact, he is a criminal and kind of a jerk.

I’m sure that some might be saying “ouch – kind of harsh their father…” Especially after tonight’s Gospel. Wasn’t that whole encounter that we just heard about underlining and putting in bold-face type the instruction that we’re not supposed to judge another person? 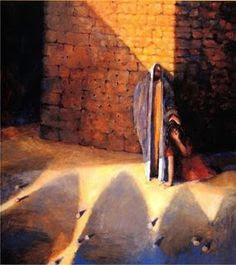 Often times that’s what we take from this story of the woman caught in adultery. But there’s a lot more going on here that we have to reflect on. Jesus was surrounded by people who had been listening to Him, started following and believing in Him. The scribes and the pharisee’s – the religious leaders of the time drag this woman before Jesus who was caught in adultery (interesting how that sin in which it would take another person to commit somehow only finds this one party, the woman, to accuse, shame and demand punishment on, but that’s another topic for another day). But what’s not up for debate is that – everyone knows that what she has done was wrong. Adultery was a sin against God and the community (still is by the way). At that time, there was a prescribed punishment which because it came from Moses, it was considered divine. So now Jesus is presented with this angry mob, this explosive case to weigh in. And not because they really wanted to know his opinion. Jesus had been causing a stir for people trying to figure out, who He really was, a rabbi? A teacher? A Prophet? The Messiah? this was meant to be a test for him to help the listeners, the leaders put him into one of those categories and deal with him appropriately.

Masterfully Jesus disarms the crowd. He doesn’t deny the teaching of Moses (that adultery was a sin). But in turning it around on the crowd saying “Let the one who is without sin be the first to throw a stone at her” he renders everyone unqualified, unable to fulfill the punishment that had been proscribed for this sin.

But the problem is that so often people take the wrong conclusions from this. That somehow Jesus is saying “you committed adultery… THAT’S OKAY come here, give me a hug.”

Jesus isn’t happy about people committing adultery – knowing the pain that causes the innocent people who’s faith and trust has been violated, injured, at times destroyed… knowing the regret and shame that the two who succumbed to the temptation are experiencing… But Jesus isn’t happy seeing these others accusing the woman and what’s going on in their lives. That each and everyone of them have had temptations they’ve succumbed to, sins they’ve committed. And instead of empathizing with the predicament the woman is in – realizing this could be me or rather this should be me as well they look to somehow deflect from those realities; deflect from the punishment their sins deserve as well with further lies like well I’m not as bad as She is as they stand there with stones in their hands.

Jesus’ challenge to the crowd wasn’t a political move by Jesus to sneak by those tricky scribes and pharisees out of a complex moral argument. It was meant to cause his original listeners – and you and I here today, 2000 years later to recognize the destruction that sin can cause in each and everyone of our lives. To wake up to that reality, particularly in a day and age where the phrase “personal responsibility” is considered harsh rhetoric; where bad behavior seems to be excused, justified and accommodated; and the slightest concern that is raised over any moral issue is met with a misquoting of this passage with an air of self-righteousness saying “who are you to judge.” 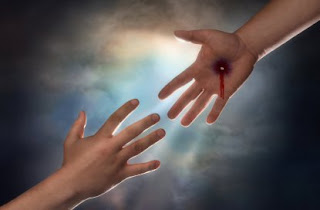 Jesus’ primary mission in life was to come to save you and I from Sin… from the destruction it causes us in the here and now… from the punishment those sins deserve. In this Gospel, Jesus saves the woman who is about to be punished for her sin. Jesus saves the angry crowd from their delusions of superiority, from their interior blindness to the self-hatred they have over the things they’ve done that they’re afraid of being found out about which they are projecting on this individual. Jesus wants to save us as well. That’s what this whole “Jubilee Year of Mercy” that we’ve been hearing and talking about for awhile is all about. God shows us his kindness, his compassion even when we’ve done things that hurt us, hurt others, hurt Him. He does that not because those things don’t matter, but because we matter more than the hurt our sins caused.

Separating the sin from the sinner – separating ourselves from our sins – this distinction is important.  Adultery isn’t okay – our own sins aren’t okay – but WE are inherently ‘okay,’ we are lovable in God’s eyes. Not because our sins aren’t a big deal, as if we could explain them away with a dozen excuses or mitigating circumstances (real or imaginary).  No, Christ forgiving the woman caught in adultery – God forgiving us here in the 21st Century – His forgiveness, His mercy isn’t incredible because our sins are minimal, negligible, because our sins are nothing (as if He says, ‘Hey, forget about it, no big deal’) but because our sins do matter.  They are destructive.  They affect us and those around us in a real, tangible destructive ways. No our sins are not ‘okay,’ it’s not what God wants for us, it’s not even – if we’re honest – what we really want for ourselves.

But the Good News that we celebrate is that God’s Mercy – which is the same kind of mercy that we are called to – is mercy precisely because there is something to forgive.   A stolen wallet.  A broken vow.  We are not called to make excuses for ourselves or for others, to explain away, downplay laugh at and eventually excuse the evil around us.  We are called to see it – to recognize it for what it is – and, once done, once realized, that, precisely THAT is what we’re called to forgive.  And that can be hard.   You might be thinking, yeah, but my brother, my mom, my roommate doesn’t deserve to be forgiven.  And, if your equating ‘deserve to be forgiven’ with ‘deserve to be excused’ you might be right.


But I don’t deserve to be forgiven.  You don’t deserve to be forgiven.  None of us deserves to be forgiven. It is an act freely made, a gift freely given – by God or by us, without excuses, without justification.  In this life, there may be ramifications for our actions – if that pickpocket was identified, he might have to pay a fine or even serve time; in today’s world, an adulterous spouse might face divorce or separation from his or her family – but the opportunity for forgiveness, for mercy is always real.  It’s always there.

That’s a tall order… especially as we enter these last days of Lent.  We may be intimidated by what we’re being asked to consider.  It might seem too hard, impossible for us to do… But, Pope Francis in his book The Church of Mercy very beautifully put it like this, we ask:  what can I, a weak, fragile sinner do?   God says to you, Do not be afraid of holiness; do not be afraid to aim high, to let yourself be loved and purified by God; do not be afraid to let yourself be guided by the Holy Spirit.  Let us be infected by the holiness of God.  Every Christian is called to sanctity and sanctity does not consist especially in doing extraordinary things, but in allowing God to act.

May we be vigilant to see the evil in the world around us, to recognize it and never excuse it.  But also begin to fill up that void with mercy, forgiveness and love, the only things that can ever fill it and bring the healing that it desperately longs for.