Hi everyone, here’s my homily for the FIFTH SUNDAY OF ORDINARY TIME – February 7, 2016. The readings for today can be found at http://www.usccb.org/bible/readings/020716.cfm . Thanks as always for reading, sharing this blog on your Facebook, Twitter and Reddit – and your comments and feedback. Have a great week – enjoy the Super Bowl! God Bless – Fr. Jim 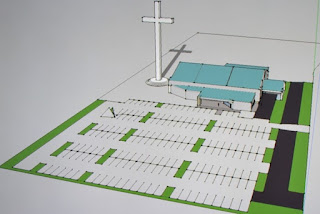 Out of Texas came an interesting story this past week of an ambitious and unique construction project. In the city of Corpus Chrisi (which is Latin, by the way for “The Body of Christ” which the City was named by a group of Spanish-Catholic settlers in honor of the Eucharist, the Blessed Sacrament we receive at Mass) a group of Christians broke ground on building what they hope will be the largest Cross in the Western Hemisphere.

The plans call for a 210 feet tall (or 19 story) structure, built on this plain of land that would be easily visible for at least 5 miles away (and 10 miles from air). This will beat the nearby Texas cross in Houston which is about 170 feet tall – but will still fall short of the world’s largest cross which can be found in Madrid Spain and is more than double this one – at 495 feet! This Corpus Christi Cross will not come cheap – it will cost close to a million dollars of which about 20% has already been raised.

The idea for this came to a local pastor from Corpus Christi who while traveling with his family saw the cross in Houston. He recalled how just seeing it from a distance captured his attention and amazement and made such an impression on him that he didn’t stop thinking about it. In the days and weeks following, that image, that sight stayed in his mind and heart. He went back to Houston to talk to some of their local pastors and heard “story after story about lives that were changed, suicides that were aborted, relationships that were restored because of the influence of the cross, reminding them that the Redeemer could restore their brokenness.” Not long after, he rallied people in his own community to join in making this ambitious plan a reality in their own community. They hope by year’s end for the cross to be completed. 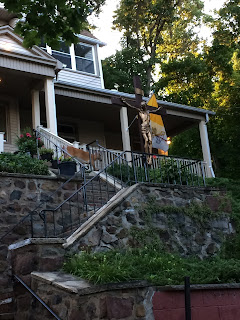 It’s a unique, creative, ambitious plan for this group of Christians. But that gigantic cross – or even our own beautiful Crucifix that we have in front of the Newman Center – only has meaning, will only be able to be a symbol that would resonate in anyone’s heart and mind if you and I take to heart what we just heard in tonight’s Gospel.

In this passage, Jesus the carpenter after speaking with crowds tells the fishermen to go back out into the deep waters after an abysmal night fishing to try again. You can sense Simon Peter’s frustration, apprehension bordering on dismissal of the suggestion… What does the carpenter (Jesus’ craft) know about fishing? The tired and defeated fishermen are a bit grumpy. Yet Peter yields to Jesus- out of respect for all that they had seen and experienced so far. Those experiences have told them there’s more to Jesus then they fully understand. And then when they do, and experience this abundant catch, Simon Peter is embarrassed that he doubted, hesitated, was reluctant to follow Jesus commands. Rather than embarrassing him (Can you imagine Jesus screaming “TOLD YOU SO, YOU DOPE” “WHAT DO YOU THINK OF ME NOW CHUMP?” No – we can’t… ) Jesus instead calls these simple fishermen who had been listening to him, accompanying him, experiencing his interactions with the crowds and invites them to follow him in a much more committed manner. He calls them to leave behind their former ways of life: leave behind their ambition, their self-reliance, their selfish desires; leave behind their self-centeredness, their sinfulness, and to trust that He can fulfill their deepest longings, their greatest needs, heal their great hurts; relieve their tremendous burdens.

To follow Him as a disciple who will share this good news to the world. He calls them – he prepares them – and us – to be living bearers of his Word in our own homes, communities, dorms, classrooms…

As Pope Francis recently put it, Jesus needs us to be “men and women who radiate the truth, beauty and life-changing power of the Gospel. Men and women who are channels of God’s grace, who enable his mercy, kindness and truth to become the building blocks of a house that stands firm. A house which is a home, where brothers and sisters at last live in harmony and mutual respect, in obedience to the will of the true God, who has shown us, in Jesus, the way to that freedom and peace for which all hearts long.

Jesus has called, gifted, empowered each and everyone of us in our Baptism into discipleship. You and I are called to be living images of what the cross signifies. We are called to transform what is bleak and dark and hopeless by our words, our actions, our lives. May we even find in the small, simple, and unheralded acts of compassion, healing and justice that we can be that living sign which that gigantic Cross represents.