Hi everyone – here’s my homily for THE BAPTISM OF THE LORD – January 10, 2016.  The readings for today can be found at http://www.usccb.org/bible/readings/011016.cfm (with the optional readings for “Year C”).  Thanks as always for reading this blog, sharing it on Social Media (Twitter, Facebook, Reddit) and your comments and feedback.  I’m grateful for your support!   God Bless – Fr. Jim

With today being the end of the Christmas season this will be my last commercial for the Annual Christmas Appeal for Newman Catholic.  I’m immensely grateful for so many people’s generous support.  If you’d like more information on the appeal and would like to make a donation, please go to our website at www.MSUNEWMAN.com The generosity of alumni, family members of our students and friends of Newman makes a tremendous difference.  Many thanks for your kindness and consideration. 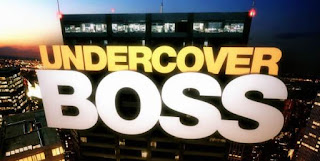 The television program “Undercover boss” has become another reality show that has become an international hit.  Millions of people tune in each week to see a high ranking executive or owner of a corporation taking an entry level position in their own company.  They do this job for about a week to experience what their own employees experience and get a sense of how people feel about the company from an extremely unique vantage point.  So, for example, the owner of Dunkin Donuts might get a job as a cashier at one of their shops for a week and then get to see first hand what goes on when the boss isn’t around; hear what the employees really think of the company; see what it’s like on a daily basis with customers.  To do this,the bossses have to work with some makeup or costume people to develop this tremendous disguise – shaving or coloring their hair; adding glasses or some other dramatic addition or change to help them go undercover.

In the course of the six years the show has been on the air, it’s obvious why the show has been so successful.  For millions of hard-working people who are employed by larger corporations, it’s nice to imagine their boss doing something like the owner of the chain of convenience stores named 7-11 did – donning a red apron on for a week, getting behind the cash register, grabbing a mop and seeing firsthand for themselves what people on the “front lines” of these business’ experience.  Even more exciting for viewers to see is that company change as a result of the experience.  Several companies showcased on the show have  addressed issues that were really affecting workers that perhaps had been ignored up to that point.

This one executive worked one day packing boxes in his company’s warehouse.  At the end of the day, the 37 year old called his mother and said “Mom there’s no way I’m going to be able to do this again tomorrow.”  The experience caused him to mandate that all his executives rotate into some of the call centers the company has on a regular basis, just so they will always keep their employees in mind and what they go through.  The owner of White Castle was so moved by the stress and health concerns of his employees that there company created a place online where their workers could access health information from a doctor or nurse directly and then took it a step further and re-evaluated the medical coverage his employees received which resulted in White Castle paying their employees some of their out of pocket co-payments. 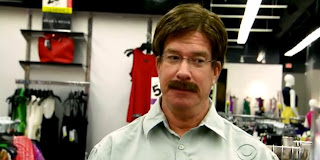 The dramatic moment of each episode is “the reveal” – when the boss meets with all the employees he’s worked with undercover, now without the disguise on… and then shares his perspectives and plans to change the workplace.  Its dramatic seeing the effect this has on everyone involved – how this visit of the boss to his people could transform the whole company.

Throughout the Christmas Season, which we conclude today with this Solemnity of the Baptism of the Lord, we’ve been recounting the visit of the “boss” to His people… God stepping down into humanity.  Becoming one of us… Becoming one with us… and How that has transformed the whole creation.

Just to recount… On Christmas the Gospel writers told us how Jesus was “Christ and Lord” and that Jesus was the “the true light which enlightens everyone was coming into the world.”  A few days later on the Feast of the Holy Family, we heard the one account of the domestic family life of Jesus Mary and Joseph – where as a 12 year old boy, Jesus was someone amazingly special… Filled with depth of wisdom and understanding that shocks the learned Rabbis, scholars and teachers in the Temple.  On New Years, with the Feast of Mary, the Mother of God, the Gospel reminded us that the Blessed Virgin Mary’s son was God’s Son as shown by his name Jesus meaning “God Saves.”  Yes Joseph and especially Mary were drawn into the drama of the Incarnation, of God becoming Man – but Jesus remains fully God as well.  And then last Sunday with the feast of the Epiphany, we heard of that spectacular sight: a star, which catches the attention of the wise men who following it are led to the newborn king of the Jews.

All of that has been in someways establishing this mysterious joining of God and Man.  It’s mind boggling for us to imagine that God who is the author, creator of all that is enters into humanity in this both humble way – as a baby to poor, but devout and loving people – and still possesses that divinity: with those titles: Christ and Lord; God Saves; King of the Jews.

Now as we are about to leave the Christmas season, the “Undercover Boss” has his great reveal. 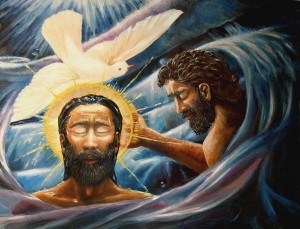 He joins with the people who are longing for God to fulfill the promises he spoke of to the Prophet Isaiah.  The valley’s being filled in, the mountains and hills being made low… There’s this desire in the human heart that longs for that.  For our valleys of disappointment, discouragement, of fear to be filled in.  For the mountains in our lives: our selfishness, our self centeredness, our sins – all the things which seem to block and obscure and make God from our lives to be dealt with.  So all of these people are responding to the preaching of Jesus’ cousin, John the Baptist who was calling them to repentance, to change their lives, to step into this water and to come out committed to doing that.  To take steps so they could begin to prepare to experience and encounter this God they longed for.

Jesus joins those crowds.  Walks with them.  Sees their desire for God; their resolve to try to change their lives; their hope that God will fulfill the promises of their scriptures and the preaching of John.  And in all humility, in his love for humanity, he steps into waters he doesn’t need to step into… receives a baptism of repentance he doesn’t need …simply to show how this Christ and Lord; how this King of the Jews, how the God who saves – will save.    His “big reveal” doesn’t come with a demands of servitude revealing himself as a God who is Master and we are mere servants.  Jesus demonstrates that he’s not spying on us waiting for us to screw up and cast us into Hell.  This whole episode reveals Jesus comes as a brother who loves us… who will do anything for us – will lay down his life for us.  Why?  Because of what St Paul told us in the Second reading “not because of any righteous deeds we had done, but because of his mercy.”

Yes, because of this extravagant, undeserved gift of amazing love – His Mercy.   And as he does this, God the Father can’t hold back anymore.  He can’t contain his excitement.  As Jesus is there with these people in these waters of repentance, the Father’s voice is heard crying out “You are my beloved Son with you I am well pleased!”

Unlike the television show when the undercover boss simply improves the lives of his employees, while the boss retains his position – with this revelation, God makes it possible – and desires – that you and I to become His beloved Sons and Daughters as well.  That we will follow the examples of humility, of selflessness, of sacrifice, of mercy and love our “Boss” has offered.  Recognizing how blessed are we that he doesn’t hide His presence or limit his visits to a random week.  He remains with us here – in His Word and in His Body and Blood in the Eucharist.

May we recapture our amazement that he visits, he remains with us – with the promise to transform the world…if we would just cooperate with Him.