Hi everyone – here’s my homily for the FOURTH SUNDAY OF ADVENT – December 20, 2015. The readings for today’s Mass can be found at: http://www.usccb.org/bible/readings/122015.cfm. Thanks as always for reading; sharing this on Facebook, Twitter and Reddit; and all your comments and feedback. Always grateful for your support. God Bless! Fr Jim

Quick commercial – This past week, we had a quite unexpected and unwelcome “surprise” – the boiler at the Newman Center went kaput.  Thankfully with mild temperatures and quick response from our plumber, we were able to have a new system installed rather quickly.  Unfortunately that was another $9,000 unexpected expense to an already stretched budget from our “Tree Falling Incident” back in May.  I’m grateful for all those who’ve already made a gift to NEWMAN CATHOLIC in our Annual Christmas Appeal.  The generosity of alumni, family members of our students and friends of Newman makes a tremendous difference.  To make a contribution, please check out www.MSUNEWMAN.com Many thanks for your kindness and consideration. 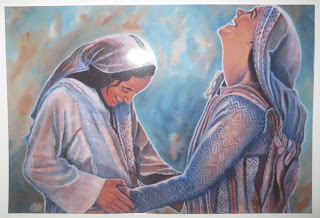 Yet, Advent comes each year not to pretend we don’t know what happened and re-stage the story where we are waiting for Jesus to be born in Bethlehem. That happened 2,000 + years ago. Jesus was born, He lived, He suffered, He died, He rose, He ascended – He changed the world forever. But as much as that single man, single handedly has transformed the world in that single event; we see in countless ways by people like Mother Terersa that God is never a one-and-done thing. He has given the path… the instructions… the model to follow. He has shown us what can be done. And he wants his Christ born again today…
G.K. Chersterton, the amazing Catholic writer, made this beautiful observation that fleshes that out observing how children play with adults: “Because children have abounding vitality, because they are in spirit fierce and free, therefore they want things repeated and unchanged. They always say, “Do it again”; and the grown-up person does it again until he is nearly dead. For grown-up people are not strong enough to exult in monotony. But perhaps God is strong enough to exult in monotony. It is possible that God says every morning, “Do it again” to the sun; and every evening, “Do it again” to the moon. It may not be automatic necessity that makes all daisies alike; it may be that God makes every daisy separately, but has never gotten tired of making them. It may be that He has the eternal appetite of infancy; for we have sinned and grown old, and our Father is younger than we.”
Advent is God’s invitation to “do it again” to give birth to Christ again. Not as Mary did. Not as soon to be St. Mother Teresa did. But to believe what the Lord is speaking to you and me… to look for opportunities to be selfless, generous and loving. Yesterday I stumbled upon this video of NYPD police officers who had gone to the Ronald McDonald House – a residence for seriously sick children from around the world who are getting treatment at several NYC hospitals and their families (see it here at: https://www.facebook.com/NYPD/videos/942221349187981/?theater) . They had asked the kids what they wanted for Christmas, used funds they contributed and raised themselves, bought them and then played “Santa” to the kids and their families. Just seeing the joy on these kids faces – forgetting how sick they were for a moment and lost in the excitement of these strangers stopping, noticing, caring for them – had an incredible effect. They brought together these people, united them, created a world of prayer, compassion and generosity – in a somewhat ordinary and simple way.
That’s the call of Advent and Christmas. For us to feel God’s excitement, His desire to “do it again” – to be born again – to see our sinful broken world made new by the eternal, loving Father. For you and I to listen to his invitations on how he wants us to believe in His word looking to conceive His Christ in us. That we will realize the depth of His love for us, his enduring dream of a people transformed in that love and his constant invitation to unconditional reconciliation, forgiveness and Mercy. May we discover how God wants to use us to make that dream real once again.