Latest News
Home /Blog/LAST ONE ANYONE WOULD PICK

Hi everyone.  Here’s my homily for the Second Sunday of Advent – DECEMBER 6, 2015.  The readings for today’s Mass can be found at:  http://www.usccb.org/bible/readings/120615.cfm.  As always, thanks for reading and sharing this on Twitter, Facebook and reddit  – and all your kind feedback and comments.  God Bless – Fr Jim 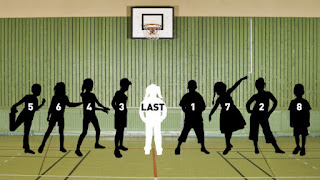 HOMILY:
It was fourth grade. I was in Gym class and we were playing baseball. Our teacher, Mr. Hanson, picked two kids – Frankie and John, both of whom were Little League All Stars – to be the ‘coaches’ and asked them to pick, from the rest of the class, the members of their teams (I’m sure this scenario isn’t unique just to those of us that went to Frank K. Hehnly Elementary School); and, so, you can imagine, the drama began.

Of all the people that were ‘chosen’ to make up teams, the real drama was for those who were picked first – and for those who were picked last. For the ‘coach’, this selection process is important – does he go with friendship and pick his closest, best friends? Or will his competitive nature win out, with him picking one of the best, fastest or all-around top athletes, regardless of friendship or loyalty?

In the cut-throat world of elementary sports, those two moguls of the sports world went with the best. Frankie picked Lee – probably one of the best Little League pitchers – and John, well, he went with Tom, who even in 4th grade was a huge kid who could connect for some monster hits. As the baseball draft continued, the anxiety level rose. My anxiety level rose. Standing on that gymnasium floor, watching as each pick was being made, after a little while I stopped hoping I’d be on the team with the most number of my friends on it and simply had one hope, one wish – that I wouldn’t be the last person picked.

Now, being chubby, out of shape and painfully un-athletic (oh, my brothers could tell you stories – painfully embarrassing, but highly entertaining stories about how un-athletic I was – for example, one time I did sit down in the outfield and start picking grass), THE POINT IS I can look back now and, reasonably, I really shouldn’t be surprised that I was the last kid to be picked. 35 years later and after some therapy, those wounds have healed – I have made peace with that, and in fact, I can even understand it.

Because – if you want to win, if you want to be the best; you look for the best; you pick the best. And so as all line-up picks go – you start with those who would seem to be the All-Stars, the future Hall-of-Famers. As you finish making your selections, you try to limit your damages as best you can when you’re looking at the last person anyone would pick.

Today’s Gospel is interesting because it seems to turn this playground principle on its head. We see the complete opposite of that happening here. God has something important to tell the entire world. Something, no rather, Someone big is coming. So in these millennium before Twitter, Facebook or the internet (in these millennium before a printing press) how is God going to get His message out?

In the Gospel passage we hear today, St Luke begins by recounting a couple of names that will be familiar (or rather infamous) – Pilate, Herod, Annas and Caiaphas. Yeah – those guys – the same ones who will figure prominently in Jesus’ passion and death. Knowing the story as we do, it’s understandable that they might not be high on our list of favorites. But if you’re God and you’ve got something, someone important to share you have very important information that you want to get out to the greatest number of people – we can’t just dismiss these people. Because these were the political and religious leaders of their day.

Yet, St. Luke sets the scene where we hear that of all those who might have been considered the best ‘players’ to chose, all of those best options for success were bypassed and, instead, Luke says very beautifully that the word of God came to John . . . in the desert. Definitely the last place you would think of to broadcast a message of universal and eternal importance. Surprisingly, the word of God came to the last person anyone would pick, Zechariah’s at best eccentric son, the kid living off of locusts and honey in the outskirts of civilization.

God seemed to know what he was doing (surprised?). All those other leaders, who knows, maybe they would have tried to use God to advance their own agendas. Maybe God had tried, but found they were too preoccupied with themselves, and with what they thought was essential, to busy themselves with Him.

John had nothing. And, because of that, John proved to be a perfect messenger announcing the coming of Jesus to a world that desperately needed Him then (and if we delude ourselves and forget in our day to day distractions, perhaps the evil unleashed in yet another terrorist attack this past Wednesday reminds us, this world desperately needs Him now… )Jesus was (and is still trying to come to) a world waiting for its own salvation, but not prepared to receive it.

John, despite his lack of power, authority, position or influence… despite his austere surroundings, He was open to the Word of God. He received it and was consumed by it to the point that he would spend the rest of his life bearing witness to the fact that GOD IS COMING TO HIS PEOPLE, and telling anyone and everyone who would hear him, PREPARE THE WAY OF THE LORD.

We know that the proclamation of this Gospel is more than just a retelling of a historical episode. The Word of God is still alive. The Word of God is still active. So try to imagine St. Luke speaking this in our day and age – it probably would start out – In the 7th year of the reign of Barrack Obama when Chris Christie was governor of the Jersey which is New… and Susan Cole was tetrarch of Montclair State University (I think Tetrarch sounds cooler than President) During the pontificate of Francis, and episcopacy of John Joseph Myers, Archbishop of Newark… the word of God came to…

I can already see people saying “not it.” Putting up walls; “Yeah, not to me,” “Oh, I hope he’s not talking to me,” “Does this mean I’m going to have to join a committee or something?” or even things like, “I’m not worthy,” “I’m not holy enough,” “There are other people who are better qualified, better speakers, better people,” “God certainly doesn’t want me.” The reality is – yes He certainly does… Well, I should qualify that. His word is coming to us – and – He does desperately want us to GET OVER OURSELVES. Our sins are not that original (and definitely not unforgivable – John’s cousin Jesus will prove that). But are we actually open to receiving His word… His commission? Or are we simply going through the motions? Or playing an amazing round of dodge ball?

It’s amazing because you are part of a generation that in particular desperately wants to be noticed, wants attention, wants what they do – when they do it – to be acknowledged, appreciated it, LIKED, RETWEETED, shared… The entire culture is consumed with sharing every petty thing we do looking for affirmation like it matters – when for the most part it’s daily distractions. While in the meantime we see people are angry – so angry – over a lot of things. And that energy is being displaced all over. Some of your peers for example learned some unpleasant things about President Woodrow Wilson’s life and they want to remove him off a plaque at Princeton as if that gesture somehow changes anything- and have been spending a lot of time trying to get that accomplished… It’s meaningless. It’s a misuse of people’s energy… people’s passion… And if we’re honest – if each of us is honest… so many of us do the same thing here in our corner of the universe in Upper Montclair New Jersey. Don’t we? Obsessing over meaningless stuff. Hung up on grudges, hurts that we’ve nursed and convinced ourselves we’re justified to be hurt and angry over them… And while we do that, we ignore that – The Word of God is coming to us… here and now.

John the Baptist didn’t desire that his fame, his sanctity would outlast every other name mentioned as he testified to that word – that was just a result of his sharing God’s Word and prepared the world to receive Jesus. And the same is true today. Valleys can be filled in, mountains can be leveled at the command of The Word of God – nothing can stop His coming to us – except ourselves – except our being closed to His word. our being closed to His Action and His Love, here and now. The Word of God came to John. The Word of God is coming to me and to you, for a reason. Can we stop looking at our faults, at our imperfections, at our ‘unworthiness’ and, instead, see our value in the Eyes of God? Can we stop seeing ourselves as ‘the last person that anyone would pick’?