Hi everyone… here’s my homily for the SOLEMNITY OF OUR LORD JESUS CHRIST, KING OF THE UNIVERSE – November 22, 2015 – The readings for today can be found at:  http://www.usccb.org/bible/readings/112215.cfm.  I’m grateful for you reading my blog; for sharing this on Facebook, Twitter, Redditt – and for all your feedback and comments.  My best wishes to you and yours for a Happy Thanksgiving.  God Bless – Fr Jim 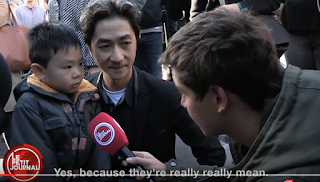 HOMILY:
In the wake of the terrorist attacks in Paris France last week, and the second wave of terror coming in the form of video threats, further scares and evacuations, live action footage of arrests and abject, understandable fear gripping well beyond the city borders of Paris – came a touching and moving exchange that hopefully has gone more viral then some of the more horrific violent images we’ve seen.

It was a less than 2 minute interview in front of the theater where the greatest loss of life took place at a concert last Friday night that had become a make-shift memorial. A reporter goes up to a Father with his young son and asks the little boy:  Do you understand what’s happened? Do you understand why these people have done this?   Questions most adults would be at a loss as to how to respond too.  But the little boy responded very simply, but with profound honesty and understanding: Yes, because they are very, very, very bad. Bad people aren’t very nice. And we have to be very careful – he then shares what his deeply felt, understandable feeling  …we need to move our home.

The father interrupts and says to the boy:   No, don’t worry, we don’t have to move. France is our home. To which his son asks  But what about the baddies, Dad?   His father responds There are baddies everywhere. There are bad guys everywhere. To which the little guy argues But they’ve got guns. They can shoot us because they’re very, very bad, Daddy.  At that, the Father very confidently and seemingly matter of factly says: They’ve got guns but we have flowers.

The first time I saw this the clip of the video ended there – but the interview actually continued with the boy continuing to question his father – arguing But flowers don’t do anything. They’re for… they’re for… they’re for… as he tried to find a word to describe flowers… And the Father interrupts: Look, everyone is laying flowers here. And the boy acknowledges it: Yes. The Father says It’s to fight against the guns. The Boy asks : Is it for protection?  And the Father answers: That’s right.  To which the Boy continues: And the candles too?  The Father explains : They’re so we don’t forget the people who have gone.  Boy: Oh. The flowers and candles are there to protect us? Father: Yes.  Journalist: Do you feel better now?  Boy: Yes, I feel better.  [see the video here:  http://www.independent.ie/world-news/europe/paris-terror-attacks/they-might-have-guns-but-we-have-flowers-french-five-year-old-interviewed-about-the-paris-terror-attacks-warms-26m-hearts-34212134.html ]

There’s a reason that well over 8 million people have viewed this exchange on line.  In the face of unspeakable human evil, we are often at a loss as adults to understand it, explain it. We struggle with the questions of right and wrong; protection versus isolation; we fight, argue, debate over how to respond – and often times after all of that, don’t get that right either.  Then as we look at these little ones, our children; after trying to address our pressing and immediate fears over protecting them from “the baddies” and mean people; we are rendered helpless in wanting to shield their eyes from disturbing images – and speechless to answer their fears, worries and confusion.  That’s why seeing this father and son so honestly discuss such horrifically real things catches our attention. 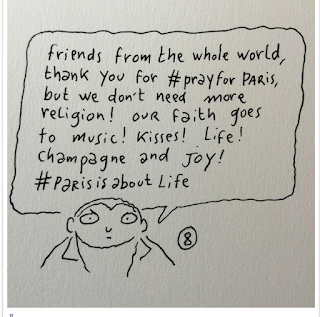 Of course it’s also spurred dialogue and debate… “What do flowers do?” Just as the little boy looking for assurances of protection wants to know;  there were others wanting to dismiss the Father’s answers as a form of naivete… silly… overly optimistic. It felt similar to those who wrote advancing the argument “Don’t pray for Paris.”  That in part originated from some cartoonists from the French magazine, Charlie Hebdo, the targets of a terrorist attack in France earlier this year. They wrote in a posting:  Friends from the whole world, thank you for the #prayfor paris, but we don’t need more religion. Our faith goes to music! Kisses! Life! Champagne and joy! Parisisaboutlife

What do flowers do? What do prayers do? On the surface – one can argue the doubters have a point. A wall of flowers will not stop a bullet, a blast from a bomb, or the blade of a knife. And merely hashtagging “PrayersforParis” can be somewhat trite and meaningless if that’s all it is – a hashtag.

And here’s where living as people of faith, we struggle with the notion of living in the world, but not of the world.  Of recognizing what we celebrate today – Christ our King.  Because it’s an either or kind of thing – Either we meant what we say or that too is a trite saying:  Either Christ truly is our King or he’s not.  And that is a tremendously complex thing.

Which we can appreciate in this Gospel passage.  Pilate as the Roman Governor, has been put in charge of continuing to occupy this Jewish territory and keep the Jews under their control. Pilate has little personal interest in Jesus. His question “Are you the king of the Jews?”  is a reaction to his pragmatic, immediate concerns. He is basically asking himself – Is this guy a potential threat to Rome? Why is he getting the Jewish leaders (who Pilate wants to keep quiet and under his control) so angry?

Jesus pretty quickly alleviates Pilate’s concerns. Just on the surface, it’s obvious he’s not a threat.  Jesus has been dragged in front of Pilate shackled as a prisoner; there’s little defense being offered – no armies to speak of, no one out planning an attack or offensive to free Him.

But Jesus doesn’t dismiss his Kingship – He explains that His Kingdom, a kingdom of truth – is not of this world. Pilate sees Jesus isn’t a threat. Pilate knows Jesus’ innocence.  In other Gospel accounts, we even get the sense that Pilate has some fascination in Jesus. Perhaps he perceives that far from being a threat, Jesus actually loves Pilate – just as he loves those calling for his crucifixion and death. Jesus loves because that is His truth… That is what He has come to testify to. That is the Kingdom of God – a redemptive, salvific, eternal love for humanity – which Jesus has come to usher in. 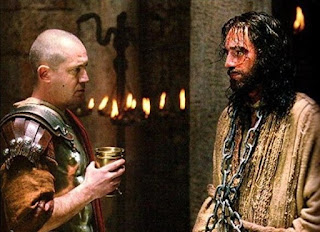 Yet Pilate can’t hear it, or comprehend it  Why? Jesus tells us:   “ Everyone who belongs to the truth listens to my voice.” Pilate’s too worried about his career. He’s too interested in his success, in prestige to be bothered with this seeming pre-cursor to “flower people.”

And so that remains true today. “We have flowers” – can’t be seen as some magic phrase to make everyone all feel better.   That symbolic gesture – observed and shared between a Father and Son was meant to teach an important, essential truth to the young boy (and remind all of us grown ups as well) that good will ultimately triumph evil; Love will always, always conquer hate.  But in order for that to be true, in order for that to be real, in order for that to resonate, we have to be doing more than just laying flowers down and instagramming an Eifel tower with our variation of prayers that are trending.

The way of goodness, the life of Love – true goodness, real, authentic love which our King demonstrates on the Cross and continues to give us as we are continued to be nourished on that selfless gift as we eat His very Body and Blood in the Eucharist confounds the world, and confounds us.  Pope Francis noted this the other day.  He very emotionally reflected on how Jesus weeps because we continue to choose the way of war, the way of hatred, the way of enmities… and that this is illustrated “while arms dealers go about their business, there are the poor peacemakers who, empty themselves in helping another person and another and another – they spend themselves utterly, and even give their lives as Blessed Mother Teresa of Calcutta did – against whom the powerful, worldly cynic might say “But what did she ever accomplish?  She wasted her life helping others on their way to death.”    With great sadness, the Pope added “the world has not understood the way of peace.”

We have trouble with that too.  In the face of Evil – unadulterated, vile, hateful evil – after we’ve done what we can to defend, protect ourselves and re-establish a semblance of security, the temptation to vengeance is intense.  We find ourselves doubting the possibility of peace — of  love — as our fears over threats real or imagined multiply.    And so this gospel passage we hear of Christ as our King, standing in front of Pilate about to be sentenced to death upsets us, angers us… Doesn’t exactly resonate.

But even if we look in that chaos, in that terror, in the fear of Paris – we still see members of His kingdom standing out. who confound the world and confound us in their acts of selflessness.  They give life to what Pope Benedict once said “God does not have a fixed plan that he must carry out; on the contrary, he has many different ways of finding man and even turning his wrong wasy into right ways… the feast of Christ the King sis therefore not a feast of those who are subjugated but a feast of those who know that they are in the hands of the one who writes straight with crooked lines.”   In the midst of the horrors in Paris, we saw that as medical staffs risked their own safety rushing from their homes into the hospitals to assist those in need; or in people in local neighborhoods who saw people terrified running for their lives and instead of barricading their doors and hiding under the beds went out and brought people into safety; or – as they so often do, day in and day out — police and military who once again laid down their lives to save others.

Those actions only are possible if you believe in true goodness; authentic love; which is at the heart of God’s Kingdom.  That’s when the eyes of faith begin to see the way of peace; and the people of faith go after it; share it; make it real to the world.  That’s when we understand the deeper meaning expressed in the sentiment:  we have flowers…

So how can we live our life with this understanding? If we  take on the role of a peacemaker for Jesus then our life won’t make sense in light of the terrorist attacks or any other struggle for that matter. The world wants to be “practical” where they think that prayer and good acts towards others won’t win a war. But, the real battles being fought are spiritual … unseen. And those in Christ know how to be equipped to fight and it doesn’t look like the battles we see. However, we know that the spiritual battle is ultimately already won.  Jesus Christ, the King of the Universe has secured that victory in rising from the dead.  His reign extends beyond our day, our time, our space into all eternity.  And our living as members of His Kingdom, gives us the confidence and the strength to take up the call, the challenge and engage this battle daily knowing we have already won.