Hi everyone.  Here’s my homily for November 15, 2015 – the 33rd Sunday in Ordinary Time.  Today’s readings can be found at http://usccb.org/bible/readings/111515.cfm  Thanks for reading, for sharing this blog on Facebook, Twitter and Reddit – and for all your comments and feedback.  Grateful for your support.  Have a great week – God Bless – Fr. Jim 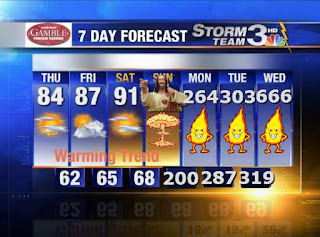 A few weeks ago, a student here at Montclair State University had warned me that the end of the world was coming. He knew it was true because he read about it on Facebook. I’ve read the article about a dozen times, and still remain unsure of how this group of Christians came to this conclusion with the certainty that they had. Because it wasn’t just some mysterious, hidden open-ended time frame like “any day now.” No they had a specific day- Wednesday October 7th . When Midnight passed and we made it safely to October 8th (one side note, does it have to be midnight in the Eastern Time Zone?) They began to recalculate and adjusted the date to October 14th. With today being a month and a day later, they have once again conceded they got it wrong. Perhaps they should’ve carried the one and subtracted the 8 and that their dates might be off again – so they’ve revised the prediction of the end of the world to soon.

I don’t mean to across as flippant about the end of the world. The fascination bordering on obsession for some over fears of the end of the world has been around for centuries – even before Christ’s warnings were first uttered in today’s Gospel. The Jews experiences of the great flood, of being in exile, being in slavery all contained elements of it being “the end of the world as they knew it” – and unlike the 90’s rock band REM – they didn’t feel fine any time they occurred.

Jesus’ prophetic words to his followers, which he first shared right before his Passion were jarring for his listeners to hear and ultimately to experience for themselves… as many scholars agree He was predicting the fall of Jerusalem in 70 AD. That was a pretty terrifying experince. There was a massive rebellion between the Jews and the Romans who had occupied their land. Historians disagree over the specifics of this devastation. Some Jewish historians claim that more than a million Jews were killed and only 30,000 survived. Others quote Roman historians who put the number at 115,800 bodies being carried through this one gate. Was it 100,000 – 200,000? Did it feel like a million? Was it a million? Not to disrespect any of the lives lost, but in one sense, the actual number isn’t as important as it most definitely felt like it was the end of the world. Think of it this way, 14 years later, we in this New York City metropolitan area are still reeling from the deaths of over 3,000 on September 11th 2001. So if it was “only” 100,000 – well I’m sure that felt like a million were lost. And I’m sure it felt like the end of the world to be sure. 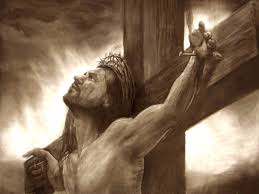 So Jesus was no doubt trying to prepare his listeners for that horrific day… Yet we know the Gospel transcends time and space and specific historical experiences. You can read this entire Gospel passage as another foreshadowing of his own personal tribulation which would’ve made the disciples freaked out as well. Jesus being led to a cross and crucified is described in the Gospel of Matthew as the powers of heaven shaken and darkness covering the whole land. This could explain some of the earliest followers expectation after Jesus resurrection that the end of time was imminent. As generations of Christians died before Jesus’ return, and that “end time” failed to materialize, people often looked throughout the centuries to these end-times passages for clues to see when the end of the world would come.

When different plagues struck in the Middle Ages, for example, and again, millions died horrific deaths from disease – or during other times of terrible wars, or natural tragedies of earthquakes, tsunamis, volcano erruptions – survivors were often times believing that the world was coming to an end. I had finished working on this homily Thursday night – never imagining the horrors that these evil, horrendous terrorists would unleash on hundreds of people in Paris France Friday evening. Just terrifying evil, violence, murder… This a week or so after terrorists would shoot a plane out of the sky killing hundreds. Not to forget these barbarians who have been slaughtering Christians with beheadings, crucifixions, burning people alive, raping women and children. Pope Francis called all of these things pieces of “A Third World War.” That’s not being said for dramatic effect. Some might want to be blind and oblivious to this and wish it to go away – and we all do – but you can’t be blind and ignorant to this real evil that is marching on. And all of that has the ability to breed, once again, this thought that the world is coming to an end – this time, for real… 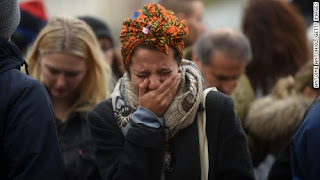 All of which is understandable. Whenever there’s suffering…. whenever there’s loss… whenever there’s pain, we as people of faith try to understand what is God’s plan in this – Where is God in all of this? It’s not uncommon even for those who wouldn’t necessarily describe themselves as faithful, devout people to all of a sudden be demanding answers from this omnipotent, transcendent being who they never really believed in before (and now feel more justified then before to not believe in)

And we don’t have to look at the horrors of the world outside to be asking those questions. When you lose someone you love… When you learn someone who is close to you has been diagnosed with a serious illness… When divorces occur… When relationships end – when we experience brokenness… in many ways its not just a dramatic turn of expression for us to say we feel like “it’s the end of the world.”

Which is why this Gospel can sound so troubling. Most people come here, come to Mass looking for God – looking for answers… looking for Hope. The last thing I want to hear when I’m looking for those things is for Jesus to talk about the sun being darkened, the moon not giving light, stars falling – heavens shaking. No Thank You! Give me something good Jesus. Give me some Hope!

But that’s a word that’s been so mis-used (among many in this culture) that it’s important to distinguish what Hope is … This great priest named Fr. William O’Malley, who’s been a High School English Teacher, written books and I think is in his 80’s by this point– once explained it like this. He said, “I’ve learned the big difference between optimism and hope. Optimism is ‘Annie’ [that’s the little orphan with the curly red hair] belting out, ‘The sun’ll come out tomorrow! Bet yer bottom dollar there’ll be sun.’ Good luck, kid. The forecast says rain for the rest of the week. Hope’s different. Hope says, ‘Okay, so it’s gonna rain. We’ll get the job done anyway.’ Hope says, ‘It’s the last inning, and we’re down by three, but let’s go out swinging!’ Unlike optimism, hope knows that quite often nice guys do finish last, but that it’s a helluva lot better to be a nice guy than to be first.”

The reality is when we are in the midst of whatever our struggles are, most of the time we want optimistic words. We want someone to tell us it’s going to be alright. Everything’s going to be fine. We want things to go back to the way they were. ‘The sun will come out, tomorrow.’ And if it doesn’t? Then what?

If things don’t turn out the way we want them to, we don’t have to give into pessimism. But we do need to be honest. Which is why today’s Gospel is so important for us to read and hear and reflect on because Jesus is honest; He doesn’t sugarcoat this truth. Yes, there will be tribulation and darkness – not just at the end of the world, but probably through many moments of our lives. Things might get so terrible that we feel things will ‘never be the same.’ But – wait for it – here are the words of hope from tonight’s Gospel – listen to them once again:

Heaven and earth will pass away, but My words will not pass away.

If we’re looking for something optimistic, words that will make us feel better, or a quick fix, then those words will pass away. Because Jesus isn’t promising a quick fix. He’s not promising to make things the way they were before, or the way we would like them to be in the future. For many of us, His words probably are not going to get you a job tomorrow morning, immediately cure that illness or miraculously pull up your GPA or heal whatever that brokenness that you’re suffering from.

The point is, if that’s all we’re looking for – a quick fix, an increase of pleasure and a decrease in pain – we will, ultimately, be disappointed in life – disappointed not just by Jesus, but by the latest self-help guru or any who market the ‘power of positive thinking’ as a religion, or tell us the Gospel is all about ‘prosperity’ (‘pie in the sky when you die, and steak on the plate while you wait’) conveniently bypassing – the cross. 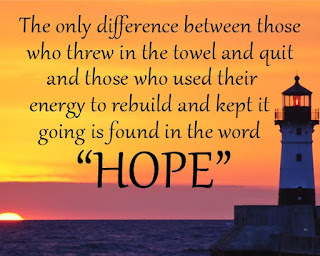 The Gospel, Jesus – who is the Word of God- is all about Hope… But we can only experience that Hope if we recognize God’s presence and activity in our lives. And that means accessing our memories to recall:

-How He loved us into existence.

-How He has sustained us, protected us, provided for us even when we’ve fallen or turned our back on Him…

-How He continues to call out to us, to remind us of His eternal love for humanity despite the terrible things that happen because of man’s inhumanity to man.

-How He reveals himself through the countless, selfless, sacrificial examples of love offered by His followers day in and day out – who do so simply because they are responding to His call in their lives.

Yes, in the reality of the struggles we face, where we may be discouraged, or let down by others, Jesus Christ promises us – even though the road ahead of us may be difficult, will be difficult – that He will never leave us, and that His words of hope will never pass away.

So no matter what natural disaster, what whirlwind, what ‘world’ of ours ‘ends’ – now, or at some time in our futures – let us never forget what comes next, Who comes next – let’s keep in mind, when hearing these ‘end times’ readings, Who it is that ultimately comes in glory, Who it is that heals our world and heals our hearts – Jesus Christ. May we let His Second Coming into our lives start right now.