Hi everyone – Happy Feast of All Saints- Sunday, November 1, 2015.  The readings for today’s Mass can be found at: http://usccb.org/bible/readings/110115.cfm.  As always -thanks for stopping by to read this blog; for your sharing it on Facebook, twitter and reddit; and for your comments and feedback.  Have a great week!  God Bless – Fr Jim 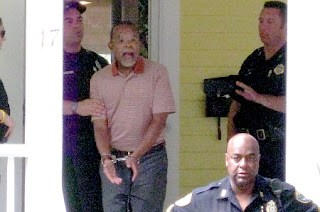 Those hashtags based on some tragic, unfortunate and deadly events have encapsulated a lot of emotion regarding the state of affairs between police officers and the communities they serve. Recently, a news organization went through some of the more recent history of these different incidents and talked about one from about 6 years ago which was quite a big story at the time: when Police Officer James Crowley arrested Harvard Professor Henry Gates


For those who might not remember, Professor Henry Gates, had been returning home from an international trip. He and his driver were having difficulty trying to open the front door of his house. A concerned neighbor called the police thinking that she was witnessing someone trying to break into the house. When Police Sergeant Crowley arrived to investigate, Gates, who is an African-American, accused him of racial profiling. Tensions escalated, words were exchanged and Gates was arrested. Things got even more contentious since Hnry Gates is a personal friend of President Obama and so when he was asked about the incident at a press conference and characterized Gate’s arrest as “stupid.” After that, something that had already been controversial in the media became even more so. The police officer, his union, and many law enforcement personnel all came out in support of Crowley. Gates had his own supporters. It seemed to bring to the forefront debates about whether white people and black people could ever understand one another’s perspective. Unlike today though, there was some productive conversations particularly when President Obama invited both men to the White House, to sit together on the porch and talk to one another in what was called “the Beer summit.” 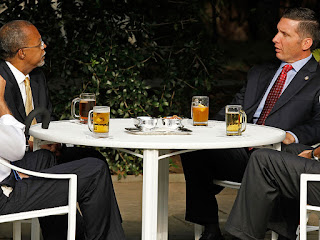 That news clip reminded me of another piece of the story that didn’t catch a lot of people’s attention, but was incredibly fascinating. A news organization did some investigation and ran a headline saying “Harvard Professor Gates, who is Half Irish, related to Cop who arrested him.” The story explained that Gates had discovered after having his DNA analyzed that he was descended from an Irish immigrant from the 4th century. It turns out that Officer James Crowley, was descended from that same line. You’d have to imagine for these two men that had to be pretty surprising. Here you have a white Irish Cop and a Black scholar. In so many ways seemingly coming from completely different worlds. As things became more and more contentious, the thought that they must have absolutely nothing in common with each other and that one another had no idea what the other must go through, think, experience on a daily basis must have gone through their heads. And for the most part, had there two paths never crossed, as they did in this unfortunate encounter, they could have gone through their lives thinking that. You could almost imagine the cop working a shift, maybe driving on patrol passing the professor walking to a classroom, never imagining they had anything in common with one another.

Yet in this amazing “coincidence” – shows that they turned out to be distant relatives. Perhaps this knowledge helped ease their tensions with each other. (Well, probably the beer from the beer summit helped too) But perhaps it helped them to relate to one another on a more personal level.

When people discover some connection to one another, it seems to be able to break down walls. Maybe it’s not something like a DNA test proving a connection of centuries to some Irish ancestry like it was for Crowley and Gates. Maybe you’re talking to a classmate and discover you’re from a neighboring high school or that you’re both music majors. You both are Giants fans (and both hate the Eagles) – up until that moment you might have never imagined never thought you’d have one similarity one thing in common, But after you discover a connection, it’s hard not to appreciate that connection and feel differently. You’re able to stop seeing the differences so much and see something similar to each other.

Today we celebrate the Feast of All Saints. And like so many things in our faith, we often misunderstand what it’s all about. We often look at these Saints just as really holy people who we have nothing in common with. These are holy people who love God and God loves them. They’ve died, they’re in heaven – they got it all together, while we focus on how we struggle. We might think, hey it’s great if I get to Mass on Sunday , what connection can I have with the saints? 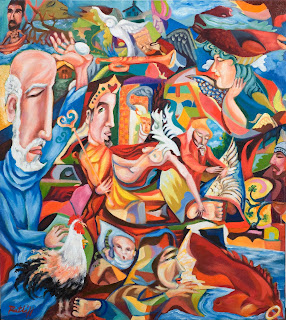 The reality is, today’s feast is meant to remind us, (or perhaps it’s sudden, new, shocking information to us) that we’re related to these Holy people. By our Baptisms we’ve been joined into God’s family, which is why throughout the Mass we refer to each other as brothers and sisters (not something we should be limiting just to Mass, by the way, but that’s something for another day)

The Saints are our older brothers and sisters. Men and women like you and me. Who in their day and age struggled to be good people, holy people. Tried to find God in their lives and the world around them and to respond to his direction and activity.

Which is why we had the Gospel reading we had today – Jesus’ Beatitudes. If we go up and down that list of all the people Jesus is calling “Blessed” – the poor in spirit, the mourning, the meek (when have the meek ever been high on anyone’s list?) those who hunger and thirst (yeah them too) – would anyone of them consider themselves “Blessed?” Most of us when we experience moments of those things consider them “difficult time” or we’re “having a bad day.”

But what makes a saint a saint is that they understand they are “blessed” not because it’s great these rough things are happening, but because they remain absolutely convinced that God is with them through that. And they pick themselves up, they remain engaged in the struggle and try to live that reality in the face of whatever trial whatever struggle they face.

And the world notices them. Even with our 30 second- attention spans – names like Francis of Assisi, Therese of the Little Flower, Augustine, from hundreds and thousands of years ago somehow resonate in our memories. And more current heroes like St. Pope John Paul II or Blessed Mother Teresa witnessed to us that saying “no” to the way the world operates and “yes” to the Lord is possible.

There’s so many other men and women though who come in and out of life – people who might not elicit the global attention like those Saints, but their holiness impacted our lives. I can think of relatives, friends, or good holy priests who affected my life – who were saints to me. Maybe you can too. People who encouraged you to go to Mass, to say your prayers, who helped raise you in the faith. People who demonstrated the Love of Christ in how they took care of others – their sacrifices, their selflessness which even after their death can bring tears to your eyes when you think of them.

They are the ones we remember in today’s feast of All Saints. Not to idolize them from afar or worship them… but to remember our connection, to see our relationship, to remind ourselves how we’re related to them. And that in the eternal kingdom of Heaven, these our older brothers and sisters in the faith are encouraging us to try to follow their example. To remember the way they lived their lives and the impact that had on our faith which testified to how God is active and present at all times in all things. In the joys and the sorrows – when we are mourning, when we are comforting those who are mourning – and everywhere in between.

Our older brothers and sisters are encouraging and rooting for us too, looking for us to move beyond the earthly divisions, the separations that the evil one causes throughout this world of ours… Telling us to keep our eyes and hearts united and focused on that banquet, that heavenly “summit” – where indeed all lives matter because God so desperately wants each one of us, black, blue and every other hue to live our call to be Saints – striving for holiness now  with and for one another so that we can be united together with Him for all eternity.