Latest News
Home /Blog/A “YELP” FOR PEOPLE? LORD HELP US
Hi everyone – here’s my homily for OCTOBER 18, 2015 – the 29TH SUNDAY IN ORDINARY TIME – The readings for today’s Mass can be found at:  http://usccb.org/bible/readings/101815.cfm.   Thanks as always for stopping by to read this blog and for all of your shares on Facebook, Twitter and Reddit – as well as all your feedback and comments.  Have a great week – In Christ, Fr Jim 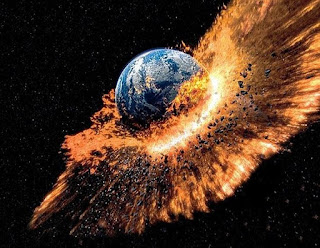 HOMILY:
Add this to the ever-growing list of signs of the collapse of our civilization number…Who knows at this point? I’ve lost count. Reportedly in a few weeks a new App will be launched for your iPhone, androids and every other computer device imaginable; where everyone you know will be able to rate you. Yes, someone has basically created what’s being called a “Yelp” for people. We are in a world where you are able to rate everything from restaurants, to cars, to your professors, to government agencies and to even bowel movements. (That one has to be on that list of signs of the collapse of our civilization as well). Now comes this news that everyone will be a fair game for everyone to rate, comment, and scrutinize over.

As the reporter in the Washington Post breaking this story a few weeks ago accurately pointed out: “the most surprising thing about the [“App” (whose name I will not share)] may be the fact that no one has yet had the gall to launch something like it. When the App does launch, you will be able to assign reviews from one to five-star ratings to everyone you know: your exes, your co-workers, that old guy who lives next door. You can’t opt out once someone puts your name in the App’s system. It’s there unless you violate the site’s terms of service. Also, you can’t delete bad or biased reviews. That would defeat the whole purpose. Imagine every interaction you’ve ever had suddenly open to the scrutiny of the Internet public.”
One of the things that surprised me was that in this era where we’ve seen the effects of cyber-bullying, you would’ve thought we wouldn’t have to point out what an atrociously horrific idea this whole thing is. However, I guess it’s hard to dissuade people like these developers who have over $7.6 million in investors’ money available, and are believing their own Public Relations, marketing spin, that this will be a great thing for everyone. They explain that everything that you do will be reviewed, judged in the open, public format under three categories: professional, personal or romantic. As one of the developers said: “That’s feedback for you! You can really use it to your advantage.“
Uh – Thanks…
It would be great to think that one could possibly use this App for self-improvement, for “fraternal correction.” But the reality as the inter-webs has proven time and again, is that technological advances aren’t always used for the advancements its developers had imagined. Sure, Facebook, Twitter, and Instagram – they’ve all changed how we communicate and receive information in a number of ways that has been beneficial and convenient. But it’s not hard to think of examples where social-media has allowed for some awful behaviors to rise. A person feels more uninhibited, hiding behind the seeming anonymity of a profile they’ve created or some pictures they’ve chosen to share on a computer screen. We’ve heard of where people are threatened, harassed or attacked online.
But these bad behaviors don’t have to be the obvious or extreme examples or stories. There’s the more common, less obvious things that happen which this new App seems perfectly suited to expand upon. Where we look to exalt ourselves or see ourselves as great, as important by picking apart someone else’s faults, scrutinize their weaknesses, relishing their failures as a means to somehow feel better about ourselves – “I’m better than they are at this; I look better than that – I’m not as bad as this person is…”
Why does that happen? Why do so many of us seem to give in to that temptation? Probably because we want to deny our fragileness; we want to forget our weaknesses or diminish our brokenness. So by diminishing those around us, and making ourselves feel more important we try to do just that.
As “technologically advanced” as we might be with our smart-phones (that seem in instances like this to be an oxymoron) – humanity hasn’t advanced much at all. Rivalries, jealousies, envies, gossip, arrogance, moral superiority still occur just as they did thousands of years ago. Look at the gospel we just heard. What was the first thing we heard in that passage? 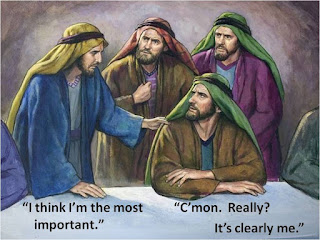 Uh – what? Talk about a QUESTION – (There’s a descriptive term that I want to use, but it’s not appropriate in a homily. The nicer way of saying it is moxy…) James and John have some MOXY. LOTS AND LOTS OF MOXY to start off like that. That’s how the two brothers started out as they lay out for everyone to hear, their power-grabbing scheme. “Grant that in your glory we may sit one on your right and the other at your left.” It wasn’t enough that Jesus had chosen them to be in his inner circle; to be one of the chosen 12 apostles. They wanted to be #1 and #2. I wonder how they had worked it out amongst themselves, who was 1 and who was 2. Despite Jesus trying to gently point out the arrogance of their request, the others were just as deaf to Jesus as James and John were. As we read “when the ten heard this, they became indignant at James and John.” If it was happening today you could imagine Peter texting Thomas #WhoDoTheyThinkTheyAre, #ArrogantBrothers.
Mind you, this whole scene took place moments after Jesus had once again told them all that He is about to be handed over. To be condemned to die a brutal, torturous death and after that He will rise again. They kind of ignore the “cross stuff” – It’s the Glory they all want a part of: – Let’s just fast forward to the good part… yeah Jesus when that Glory happens, can we be on your right and your left.
We all crave that – to be a part of the “glory”… And ignore the other part.   The difficult part…
Whether they are obvious or hidden from the rest of the world:  We can’t ignore the wounds, the brokenness, and the weakness that every one of us suffers from. Maybe it’s a sin that you feel ashamed about. Maybe it’s an addiction that you continue to struggle with. Maybe it’s a physical illness or pain that has taken a toll on you. Maybe it’s an emotional wound or personal pain that you haven’t shared with anyone. Maybe it’s a loss you continue to grieve about that you don’t want to admit to.
Every one of us have our own wounds, our own brokenness, and our weaknesses. It’s not defeatist to admit that. We are defeated when we deny that; when we diminish ourselves as we diminish others.
But – we can see we’re not defined by our wounds, we can begin to experience healing for our brokenness, we can overcome our weaknesses that when we listen to what Jesus is saying. Because He did not tell the apostles about what was going to happen to him – about the Unjust trial, conviction and sentence he wold face to prepare them for battle, (he knew they’d fail in that regard as they would abandon him anyway). He’s telling them and all of us He’s giving His life freely – so that we might have life. He’s offering his life to save us… What does that mean? In short, He’s teaching us that any real, life-changing love will costs us something.
Let me say that again. In a world where words like “Like” or “Friend” or “Love” have been bastardized so badly, we need to remember that love isn’t just a warm, fuzzy feeling. Love isn’t just when I feel happy about something. Love isn’t something I like to do for people who like me who I want them to do nice things for me in return… Those are at best – nice gestures and at worse, self-centered manipulation. 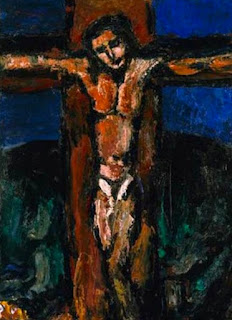 Jesus teaches us that Real, Life-Changing Love will costs us something. This past week, when I stopped by the Hospital where MSU Student Anna Semioli who is still in a coma from the hit and run crash she suffered here a little over a week ago – seeing her mother, her family and friends who were there for days and they refuse to leave her bedside… that’s costing them something – everything in fact – – that is Love.

When you see a person who is lonely, who is struggling and you give them your attention that costs you something, that is Love. When you choose to take care of someone else, whether it’s working at a homeless shelter, volunteering on campus or reaching out to your grandmother or grandfather who is elderly – and you give them your time and your presence – that costs you something – that is Love. Yes, to actually step into someone else’s brokenness, someone else’s weakness, someone else’s “woundedness”, that will costs you something – that is Love.
But we are able to do that because He loves us this way. That’s what the cross is about. He gives up his glory, He gives up his power, and He is allowed to be made weak, to be broken, and to feel our fragileness our “woundedness.” The “woundedness” of a world where human beings still try to pretend that they are gods. That they are the centers of the universe and in the process hurt themselves and others. He steps into that and it costs Him something – that is Love.
But He’s willing to make that sacrifice. To make that attempt, as He himself tells us in the Gospel tonight: “For the son of man did not come to be served but to serve and give his life as a ransom for many.” And tells us – Do you truly want to be great? You really want to be on my right or my left? Do the same.