Hi everyone – here’s my homily for the 28th Sunday in Ordinary Time – OCTOBER 11, 2015.  The readings for today can be found at  http://usccb.org/bible/readings/101115.cfm.   Thanks as always for reading, sharing this blog on Facebook, twitter and reddit – and all of your comments and feedback.  Have a great week.  In Christ – Fr. Jim 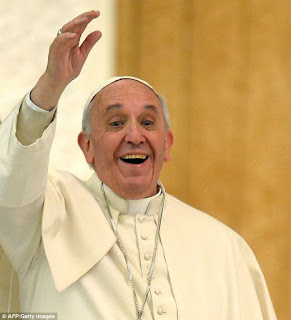 It’s been about two weeks since Pope Francis made his first trip to the United States – where he visited Washington DC; New York and Philadelphia. And it was quite a historic visit: He became the first Pope to ever address the joint session of Congress; He became the first Pope to ever visit an American Prison (talk about your extremes in terms of historic firsts!) He was greeted by enthusiastic crowds; TV anchors seemed giddy and caught up in the excitement and genuinely moved by his speeches and homilies.

It was overwhelmingly a positive visit and experience for the Church and arguably for the country. It was one of the few times that we saw politicians from opposing parties genuinely happy and in unity over anything. Beautifully I saw Democrat (and Jewish) Senator from NY Charles Schummer called the Pope’s speech to congress one of the best speeches he’s ever heard and talked about how he was feeling “twinges” in his spine throughout the address.

That good-will seemed to have gotten sidetracked not long after the Pope returned to Rome. News surfaced that Pope Francis had a secret meeting while he was in Washington DC with Kim Davis, the county clerk from Kentucky who made headlines in the US a few weeks ago for refusing to sign marriage licenses of same-sex couples. Very quickly, the Press which a few days earlier had been offering positive reviews to his addresses turned on him. One headline in a newspaper read “Kim Davis? What was Pope Francis thinking?” with an opinion piece that trashed him and likened it to people supporting segregationists who refused to let black students enroll in a school in Alabama during the Civil Rights Battles of the 60’s.

Maybe a day or two later, another “secret”meeting was revealed. Pope Francis met with a former student of his from when he was a teacher in Argentina. What made that visit news worthy was that this former student, Yayo Grassi, is an openly gay man who now identifies himself as an atheist and brought his partner with him who is Muslim. The meeting came about after Yayo had sent an email to the Pope (how come I can’t find his email address?) where he said he knew it was a long shot, but, since he now lived in Washington DC, he would like to see if it was possible to meet the Pope while he was in town. Pope Francis phoned him personally and said “if you have time I would love to give you a hug in Washington.” To put it mildly, now people on the other side of the same-sex marriage debate lost their minds.

On some level it was fascinating watching as spokespersons, commentators, pundits, politicians adding to the confusion in the days that followed. Some parsing the Pope’s words (and actions) for their own set narratives. Others expressed disappointment, anger, even outrage. Very few seemed to be able to see past their own agendas and political stances. They liked the Pope when he conformed to their ideas. When he seemed to be on their side or with those they felt allegiance to. But in the views of the extremists on each side the Pope made the unforgivable sin of meeting with who they considered the enemy. This was just one example (and the one that seemed to get the most attention most likely because of how Kim Davis has become a polarizing figure in a very divisive debate) But look at other issues that the Pope raised and it was the same thing- Abortion; Death Penalty; care for the environment; care for the immigrants – and there was similar anger from different corners of the political/societal worlds. He was called a socialist, a communist, a Marxist, a leftist all because of his concerns about the Poor, and the immigrant. Newsweek even had a deliberately provocative cover where in large letters it asked “Is Pope Francis Catholic?” obviouslly picking up on this theme: 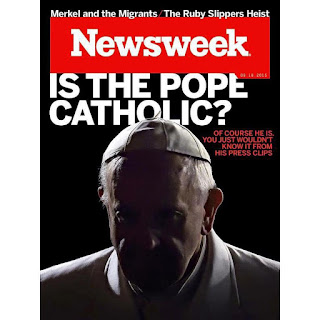 It was amazing seeing how people went from loving the Pope to hating on him pretty quick. Stories about the Pope’s favorable and unfavorable numbers (like he’s Donald Trump or Hillary Clinton) popped up – even breaking them down on the difference between Republicans and Democrats views on him; or how Catholic who attend Mass every Sunday vs those who attend less frequently.

Quite honestly (and I’m not the Papal spokesperson, so I hope he’ll forgive my speaking for him) I don’t think Pope Francis cares. Because in short, those extreme reactions are all about the people having them – not the Pope nor the Church he leads, nor the Lord he serves for that matter. Because He is demonstrating for us Gospel living… The radicalness, the completeness of the Gospel that defies convention, defies any one particular political party, defies any one person’s particular narrow beliefs and challenges them. Because the Gospel is supposed to make all of us uncomfortable at some point. To break us out of the arrogance of our sometimes common, modern-day approaches thinking I’m right, you’re wrong – ergo I hate you and all that you stand for because obviously you’re a (fill in the blank with your own list of descriptive vocabulary). It’s okay to have strong beliefs, but not at the expense of recognizing the person that is there on the opposite side of those beliefs and our obligation to follow the greatest of all commands to love one another. To have the humility to recognize the failures, the struggles, the sins in my own life that I desperately hope the Lord will look at me with more mercy than I do to my enemies… That’s what the Pope is trying to demonstrate with us by living that Gospel message. And if we’re not challenged by that it’s either because we’re Saints or we’ve created a religion of our own.

Which is one of the fatal flaws the “Rich Man” makes in tonight’s gospel: He has created his own religion where he feels comfortable... He goes up and down the list of commandments like a checklist- Didn’t murder anyone – CHECK, Didn’t commit adultery – CHECK, Parents are okay – CHECK…and thinks I’m good… yet he can’t get past that gnawing feeling within himself that doesn’t feel completely fulfilled. There was something missing. Jesus very gently tries to probe his mind and his heart and finally underlines it for him. He’s basically saying “Buddy, why are you here? Why are you trying to justify yourself? Do you see that you have a superficial relationship with the Lord. You’re treating the Commandments like minimum requirements on an application that need to be fulfilled in order to have a reservation in heaven – meanwhile your money, your material goods, your wealth and riches – they’ve become your god, they are your master… they are the thing you think you can’t live without.

But this Gospel is more than just about riches and poverty. So often we can listen to this somewhat feeling self-righteous thinking that guy with the Jaguar is getting hammered this weekend. But the deeper message is about looking at how our relationships with the Lord can sometimes be superficial as well. That we can look at our religious practices as obligations that need to be met so we can get into heaven. We look at that – heaven, eternal life – as a different life – and that doing these basics is simply saving for our future deposit and we hope to God we have enough to get in.

Yet Jesus wants us to experience heaven now – here. And there can be a lot of things – other than money – that can be blocking us from living that life, experiencing the Kingdom of God now. Like our egos, our prejudices, our angers… Like our sinfulness, our pride… I’ll never forget one time meeting with someone in spiritual direction who had been striving to be a good Catholic, a devout Catholic – her faith had been and was becoming more and more important – but she was struggling with a particular sin and said to me “I know what I’m doing is wrong, I know what the Church is teaching is right – but I know I’m not going to stop doing it.”

It’s hard for us to let go of whatever it is we’ve convinced ourselves will make us happy, or whatever it is that we think justifies our feelings (or our inadequacies). Jesus though is constantly going to be trying to get us to have a bigger vision than we’re willing to allow ourselves. To look beyond our wants, our needs, our desires. To not forget that yes He wants to have a personal intimate relationship with each of us, but that He came to save all humanity. And He is going to continue to go about that – one stubborn, sinful heart at a time.

To be honest, when I first heard that Pope Francis met with Kim Davis, I’m ashamed to admit that I started postulating all kinds of excuses for people who were angry or expressed disappointment about it saying things like- he meets a lot of people; he probably didn’t realize how controversial a figure she was, he must’ve gotten set up or sandbagged by someone – mostly because I didn’t want the good press to end on the Papal Visit or get into a debate with people on what’s become such a harsh debate (so I guess my sin would be a pride/ego thing? Or I suppose I should say one of my sins) And it was funny, a friend agreed and pointed out”how weird is it that Pope Francis can meet with two brutal dictators – Raul and Fidel Castro a few days earlier and barely anyone got angry in the media about that – but now that he met with her, it’s like they want him to resign now or something.” And we went back and forth over the different complexities of all those different stories.

Yet the more I reflect on it, it’s much, much simpler. One author writing about the Pope’s meeting seemed to hit the nail on the head: Some might see [the meeting with Kim Davis as a] mere routine in the pope’s encouragement, but the eyes of faith see something more: an act of humility, imposed by his lofty office. Even an act of trust and love. [Where Pope Francis was saying:] The world hates you. I do not.