Hi everyone, here’s my homily for September 27th, 2016 – the 26th SUNDAY IN ORDINARY TIME – the readings for today can be found at: http://usccb.org/bible/readings/092715.cfm Thanks as always for stopping by to read this blog – and for sharing it on Facebook, Twitter, Reddit and elsewhere. I’m blown away by the numbers of visitors and where you’re all from. Thank You! And thanks for the comments and feedback. God Bless – Fr Jim 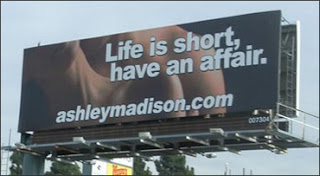 HOMILY:
A couple of years ago, I was driving around and listening to the radio (I think it was the Comedy Channel) and there was an advertisement where I learned about a company I never wanted to hear about – Ashley Madison. Being it was on the comedy channel, I really thought it was a joke – but their was no punchline… it turned out to be very sadly – very real.


Quite simply it’s a website designed specifically for people who want to cheat on their wives and husbands. A company designed to help adulterers (or people thinking about becomeing adulterers) a “meeting” site for people to have an affair. I remember kind of staring at the car radio and seeing the website name displayed and hearing an advertising jingle that went along with it. Not long after that there were billboards popping up for this same company with the tag line “Life is Short… have an affair.”

In a day and age where there’s little left that can shock our sensibilities anymore – this one absolutely did for me. Honestly, I’m not some naive innocent priest who doesn’t know that affairs occur. Even if I didn’t know people who’ve suffered from that experience, any reading of the bible tells us this has happened before. What was shocking – what is disturbing to me – was that there was a comfortability with sin that seemed new… that seems brazenly arrogant.

It used to be that people who had an affair knew it was wrong – felt it was wrong  – and out of human weakness, or for whatever reason they gave into the temptation. Now it was being advertised, advocated, normalized – being offered as an authentic, legitimate option for people to participate in: “Sign up now”. I remembered thinking this is going to go horribly, horribly bad.

In recent months, it did. A group of computer hackers were able to crack into the “safe-secure” computer site where millions of people had made their profiles looking to cheat on their spouses and steal their names, email addresses and other sensitive personal information. These hackers first tried to blackmail the people who owned and ran the site – which obviously infuriated the owners over all this immoral activity (the hacking and the blackmail threat; obviously they didn’t have a problem with the adultery). The owners refused to give into the hackers demands and claimed this was a bluff that they didn’t have all that information on the sites clients. The owners then lied to their “clients” – their customer service representatives said to a reporter who posed as a client “Our system is completely secured. They tried to hack the site but they weren’t successful. Your details are never compromised … it’s false [that 2,500 customer records were leaked]. Only two of our members’ details were leaked. You know how the media work and they want to get attention. The site is very successful and (the media) are trying to make stories.”

Shockingly (or rather not) that was a lie. The reality was the hackers were very 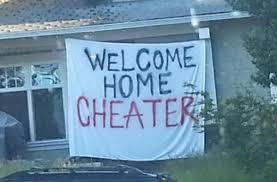 successful. Police report that criminals had attempted to extort money from clients using the site threatening to expose their affairs to their families and friends… Massive crises for families have developed, couples have separated and divorced… there’s been several suicides where people caught in this hack attack and were exposed or about to be exposed because of their indiscretions were so overwhelmed with guilt and shame they took their lives.

What has been striking though is that for the most part the public reaction, the anger has been pretty much directed at the hackers. One commentator put it pretty simply: How dare they do something so illegal as to break into a company’s website, steal such sensitive information and then publically share it and cause all this fallout. Few see the irony – most seems focused just on that aspect – the hackers and the fallout – as if this were just another terrible cyber attack like if these criminals went after Apple itunes or Bank of America and did that to their customers.

What’s been kind of forgotten is this is a website for people to cheat on their spouses! I’m not saying so they deserve what’s coming to them… not at all. But there’s this attitude where people seem to be shrugging their shoulders at the cheating, the adultery treating it like smoking cigarettes hey it’s a bad thing, but it’s your decision… just keep the smoke out of my face…

And that’s the thing… that’s the question – how comfortable are we with sin – how comfortable are we with any sin? As people we seem to becoming more and more disconnected, isolated from one another. In the process, we seem to be losing a sense that my sin affects you and your sin affects me. Whether it’s something minor like a guy screaming a curse word across campus or someone flipping off someone in the parking lot – or something more dramatic, a sin of indifference where a person gets hit by a car and people continue to walk on – not even stopping to see if how bad the person was hurt and what they could do to help.

That’s what Jesus is trying to get at in this very dramatic gospel imagery today where he goes so far as to suggest the amputation of limbs rather than to allow those body parts to contribute to the cooperation of evil which could both hurt us and others. We don’t read the bible literally… So please, don’t stop at Home Depot on your way out of Mass today.

He is using that dramatic imagery to make an important point. The goal of following Him, the purpose of being a Christian is to get to Heaven. And to achieve that goal we are called to live like we’re citizens of heaven already and you and I – we have to help each other as we journey to get there. That’s why Jesus kind of blows off the petty concern at the start of this passage (kind of imagine John in a whinny voice:)– Jesus they’re not in our group and they’re casting out demons in your name. As Christians, you and I need to be focused on heaven – getting there ourselves and taking everyone with us. And whether the Newman Catholic Campus Ministry does that – the missionaries from FOCUS or some other group of Christians – the important thing for all of us who say that we love Jesus is to act like we do, to behave that way…

And one of the most common things among all those who say they love Jesus is that they hate sin Because sin in short is an invitation to Hell. 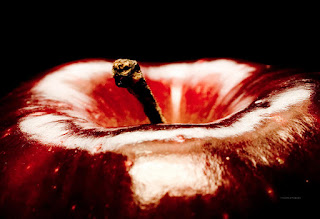 The problem is, in Facebook-terminology, we haven’t RSVP’d to that invitation to Hell. We haven’t accepted the invite – but we haven’t exactly declined. It’s just there. We’ve gotten comfortable to some extent with it’s presence in our life. That’s what sin does – it looks attractive. It tries to manipulate us, convince us to take a glance, give something a try that we know we shouldn’t… no one will know,… everybody’s doing it,… people are doing worse… you deserve this… what the hell? [pun intended]

You have to believe that for those millions of people caught up in that Ashley Madison scandal, they’ve experienced hell already. The people who are now living in constant fear of being “found out” – the humiliation for those who have – the fundamental distrust that has been unmasked, unleashed on couples…

Yes, they’ve experienced Hell.
– And – the more we shrug our shoulders and say “Oh” and just move on – bewildered – rather than call it what it is – sin
– the more we allow one another to think that perhaps it’s okay, or, well, it’s not my place to say something like that to tell someone else that that’s wrong or, I don’t want people to be offended by my beliefs;
– yes, the more we don’t want to confront our own sinfulness and truly have a change of heart – realizing that my sins affect you and your sins affects me – then the more we opt to experience Hell on earth as well and we diminish our sacred calling as followers of Jesus.

Jesus is pleading with you and I to take these things seriously, both for ourselves, for one another. To recognize how strong, how important you and I are to one another. The amazing influence we have on one another. Not to get in people’s faces, point our fingers and call people out on their sins. That’s one of the things these hackers did – trying to embarrass and harass people. But rather Jesus is calling us to replicate the great love he has for us. And so that means, we have to

– Remind one another of the love of Jesus Christ that saves us from our sins and wants to heal and restore us in his tremendous gift of Mercy.

– Encourage one another to resist the various temptations that are designed to lure and entrap us to something far lesser than we are created to be, than we truly want to be.

– Call one another to come to know, to love, to follow Jesus ever more closely.

Last Sunday, Pope Francis put it like this: Being a Christian entails promoting the 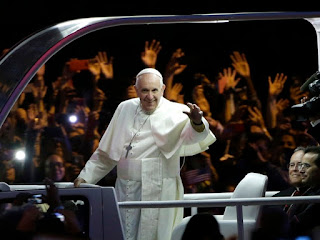 dignity of our brothers and sisters, fighting for it, living for it. That is why Christians are constantly called to set aside their own wishes and desires, their pursuit of power, before the concrete gaze of those who are most vulnerable. All of us are called by virtue of our Christian vocation to that service which truly serves, and to help one another … All of us are asked, indeed urged, by Jesus to care for one another out of love.

When we do these things, than the opposite of my sin effects you and yours effects me is revealed… we encourage one another, we build each other up, we become brothers and sisters, we become the Body of Christ.