Latest News
Home /Blog/A “PAPAL PLEA”: CAN WE JUST PAUSE FOR A MINUTE? 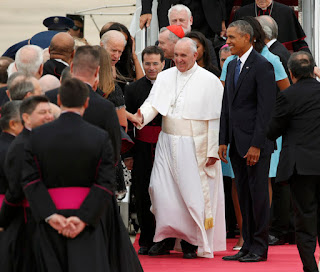 Two days into the Pope’s arrival into the United States, and some of what I feared might happen is coming true. People picking apart the Holy Father’s words and actions. Some trying to co-opt them for themselves and their agendas. Some angrily offering instant commentary (where else but on twitter) stating their disappointment that “He didn’t say this” or “He should’ve said that.”

I suppose that’s par for the course to some extent. The Pope is controversial because Christ is controversial. And as the Vicar of Christ, as the successor to St. Peter, it’s his job to preach the Gospel message – which as has been said – has the power to comfort the afflicted and afflict the comfortable.

But one of the things that troubles me so much is seeing fellow Catholics jumping into the fray. Most disturbingly as some advance a ridiculous narrative that the Pope’s not pro-life enough and using the Pope’s speeches not for reflection but as evidence supporting such a false and libelous accusation (did any of them see just a few weeks ago on ABC’s 20/20 when he lauded a single mother who was struggling pointing out how brave she was in having the children and not killing the child in the womb – in just that brief moment he comforted a struggling Mom, identified the horror of abortion and reduced many, especially the news anchor mediating the town hall, into difficult silent reflection)

Let’s take a moment and reflect on the context, the backdrop of the Pope’s speech to the Joint Session of Congress.

For the first time ever, the Pope spoke to the elected representatives of the people of the United States of America. And where are we as a nation right now? One of our leading presidential candidates most specific platform is building a giant, albeit he promises “it will be beautiful”wall – and deporting every person who is here illegally (but we’ll bring the good ones back) The other side of the political aisle pretends that videos don’t exist (or try to claim some moral ground arguing that because deceit was used in order to obtain the videos, they can continue to ignore the information obtained in them) that “Planned Parenthood” a tax-supported organization that already carries out the atrocity of abortion is now trying to keep those human lives viable enough to sell their body parts as they kill them. In the meantime, anger is boiling in cities where the violence of citizen upon citizen is ignored; each criminal arrest and interaction between police and suspects has grown even more dangerous because of tragic (and sometimes criminal acts at the hands of those sworn to protect) all stoked by the flames of a “hashtag” to the point that now we’re seeing police officers getting assassinated with a greater frequency than before.

That’s just a few of the headlines of what’s going on here… Globally, what is sometimes forgotten as we are blinded by our own issues is the horrors of Christians being beheaded, being martyred (and then the barbaric acts are uploaded on Youtube) at a rate greater than any time in the history of the world (yes even worse than in the Early Church) (http://www.catholicherald.co.uk/news/2015/04/06/more-christians-are-martyred-today-than-in-the-first-century-says-pope-francis/) 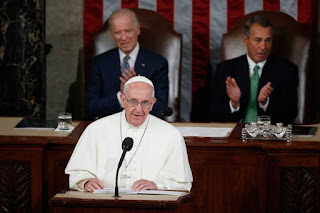 With that as the state of the nation, the state of the world, the Holy Father came and spoke as a “Son of this great continent.” He came to remind us of the great blessings of what has been called the “American Experiment” -a nation of dreamers: “dreams which awaken what is deepest and truest in the life of a people.” He came to “dialogue” with lawmakers, reminding them of the importance of the ideals of politics, namely “…our compelling need to live as one, in order to build as one the greatest common good: that of a community which sacrifices particular interests in order to share, in justice and peace, its goods, its interests, its social life.” Adding that “I do not underestimate the difficulty that this involves, but I encourage you in this effort.”

It was a powerfully important speech… a historic and unique opportunity… delivered humbly and lovingly by the servant of the servants of God, Pope Francis, that seemed to become even more powerful and important as he left our government leaders and dined with the poorest of our nation just a few blocks away. In that moving encounter he both highlighted the good that some are trying to do to help those who are struggling and at the same time pointing out how wide the gap, how extreme the extremes truly are.

People, particularly my fellow Catholics, who are tuning in… I’d just simply ask… drop your “smart” phones for a few seconds as you jump in to offer instant (and often times thoughtless) commentary, critiques because your issue wasn’t addressed to your liking.  Realize that what got you passionate in the first place is the reality that, yes, we’re living in some amazingly trying, dangerous times. There’s more than enough issues and challenges that each and everyone of us are faced with… and there’s more than enough opportunities on a daily basis (for good and for bad) for us to chime in – “debate,” “opine,” offer our opinions, our hashtags. Can’t we agree that sadly the rhetoric hasn’t done much to advance the cause of peace – for ourselves personally, our nation or our world.

So in what remains of this historic visit by Pope Francis, especially us Catholics, can we please listen to our Holy Father calling us to humility… calling us to remember God’s tremendous Love and Mercy and the responsibility we have in sharing that. Can we just pause for a minute?

PS — some of the difficulty is reading reports of what the Pope said rather than hearing or reading it for yourself.  The US Bishops website has all the information you could need including the full texts of homilies and speeches here:  http://www.usccb.org/about/leadership/holy-see/francis/papal-visit-2015/index.cfm