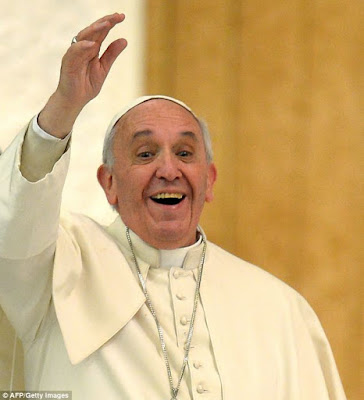 From this week’s Newman Catholic Bulletin (www.MSUNEWMAN.com)
What is it that has captured the fascination of so many in the world with Pope Francis?
There’s been quite a lead up to his historic visit of the United and Cuba this week. In the short time that he will be in Washington DC, New York and Philadelphia, he will have quite a busy few days: A Mass canonizing a Saint (Junipero Serra); a speech to both houses of congress (called a “Joint Session”); meetings at the White House with President Obama and a whole host of dignitaries;
Visits to the September 11th Memorial where he will lead an inter-religious prayer service for the victims; An address to all the delegates of the United Nations; A Massive Celebration of the Eucharist in Philadelphia before millions as the close to “The World Meeting of Families” (a major Catholic event that takes place every few years where hundreds of thousands have gathered to study, pray, discuss issues related to Family Life) And that’s just the announced itinerary … with Pope Francis, no one can be quite sure he won’t add a few more visits here and there.
But just looking at that schedule it’s remarkable for a whole host of reasons. Here’s a man who’s 78 years old. He’s never been to the United States – ever – in all his years. So this will be his first and possibly his only visit. He doesn’t speak English often (it’s been reported that he actually speaks English better than he gives himself credit for — feeling much more comfortable in his native languages of Spanish and Italian) When he does speak — it often causes controversy in one corner of another — either because some people like what they imagined he said or others dislike what they think he meant— and in both instances they are usually wrong (very wrong actually)
Yet both extremes of our political divide in this country seemed to be tripping over each other to try to invite Pope Francis to one thing or the other. When he addresses congress in that rare joint session — it will be the first time a Pope has done so. Even the media, which so often seems either hostile on the one extreme or apathetic & dismissive to the Church has been promoting and discussing this visit all summer with eager anticipation. ABC News even sent their anchor man to Rome to have a one on one with the Pope and monitor a virtual “Town Hall” with the Pope and US Catholics in three different cities. All of this even before the Pope arrives.

In the next week, you’re going to see television stations pre-empt all their normal programming and do wall-to-wall coverage. And more than likely, you’re going to see crowds BIG CROWDS from place to place as Pope Francis comes. Here in the same country where every day we’re reminded that the number of Catholics leaving the faith — the number of Christians and people who’ve stopped going to any Church at all is on the rise; where a greater number of people seem to take great offense at the mere mention of God in public discourse… yes in this land which has been described as entering a “Post—Christian era” all of this is about to take place.

What’s up with that?
Commentators, politicians, celebrities are all offering a variety of explanations. But to me it’s a bit more basic, and a somewhat predictable answer. In a world where things seem to be moving way too fast; where there’s little reflection on who we are, what we’re doing; little reverence for life – ours or others; in our over—saturation of news delivered instantly to our latest smart phones; in our competition to look for happiness in all the wrong places (and continuing the seek, fail, repeat cycles)… the heart and soul cry out for something more than what we’ve found in the everyday, in the here and now … That’s a basic need — the need to be loved, the need to know we are cared for, the need to find an answer to why am I here?
For a variety of reasons, the Catholic Church — which we believe possesses the answer to those longings in Jesus Christ and this Church which he founded — we haven’t done a great job of articulating that. Issues like abortion have become political talking points rather than an urgent matter of the heart…the good works of the Church like care of the poor seems to have been delegated to “someone else” to do. And in some ways we can see the Church has gotten caught up with the things of this world rather than trying to be in the world but not of the world (John 17: 14-16). In Pope Francis, we not only hear but often times see a model of one who is getting us back to the latter. Who utilizes things like Twitter to simply say “God Loves You.” Who reminds people “Confession is not a torture chamber — but the ultimate encounter of God’s Mercy” (and is even more direct with priests that if they aren’t merciful, they should get a desk job!) 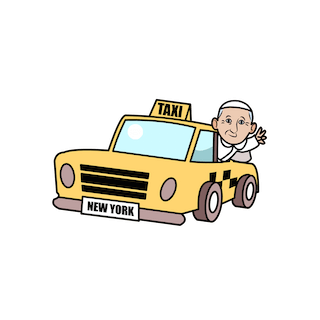 That freshness — coming from a 78 year old man — we can’t help but see as the Holy Spirit working as he often does. Unleashing God’s ever ancient, ever new love on this world — and for you and I. And so let us simply say WELCOME POPE FRANCIS and COME HOLY SPIRIT, RENEW THE FACE OF THE EARTH!

Sincerely in Christ,
Fr. Jim
P.S. I invite you to join us all week at the Newman Center to hear Pope Francis himself — rather than to read or see a headline later that will give a snippet of what someone else has to say he said. In this technologically rich world — there’s no reason we need to rely on others to hear him ourselves. We’ll be broadcasting on our big screen TV’s all the major events from the Pope’s arrival till his departure (and there will be food and drinks available as well) For those going to NY or Philly for some of the open events — be sure to post your pictures online and tag them on our Facebook and Instagram accounts!