Hi everyone, here’s my homily for the 25th SUNDAY IN ORDINARY TIME – September 20, 2015.  The readings for today’s Mass can be found at: http://usccb.org/bible/readings/092015.cfm   As always – I’m grateful for you checking this blog out, for sharing it on your social media sites (Facebook, twitter, reddit) and for your feedback and comments.  Have a great week – In Christ – Fr Jim

How many of you have read, or perhaps seen the book Chicken Soup for the Soul?  It’s a collection of short stories, anecdotes that are meant to be inspirational and heart warming for people.  The first edition came out way back in 1993.  How many of you were born then?  I shouldn’t ask…  Anyway, ever since its debut and it’s collossal best-selling status, it resulted in an entire industry of “chicken soup” books.  I have that first edition – it was a gift when I was graduating college and I can’t remember from who… but it’s one of a few books that everytime I’ve had to move or go from one place to another over the 23 years since hasn’t been discarded.  Mostly because there were some stories in there that I was blown away with at the time that pop into my mind.  For example, this story from the book told by writer Dan Millman: 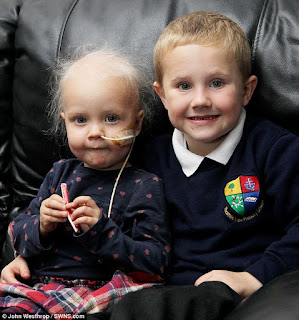 ….Many years ago, when I worked as a volunteer at Stanford Hospital, I got to know a little girl named Liza who was suffering from a rare and serious disease.  Her only chance of recovery appeared to be a blood transfusion from her five-year-old brother, who had miraculously survived the same disease and had developed the antibodies needed to combat the illness.  The doctor explained the situation to her little brother, and asked the boy if he would be willing to give his blood to his sister.  I saw him hesitate only for a moment before taking a deep breath and saying, ‘Yes, I’ll do it if it will save Liza.’

As the transfusion progressed, he lay in a bed next to his sister and smiled, as we all did, seeing the color returning to her cheeks.  Then his face grew pale and his smile faded.  He looked up at the doctor and asked with a trembling voice, ‘Will I start to die right away?’  The boy had misunderstood the doctor; he thought he was going to have to give her all his blood.

That heart warming, mind blowing story came to mind reading and praying with this Gospel.  For two Sundays in a row, we’ve heard Jesus telling his disciples, his apostles, his closest confidents.   The ones who’ve been there the longest.  Seen Jesus in action… Heard His words…. He  tells them again about the ultimate, supreme sacrifice that will happen.  Jesus will die on the cross for the salvation of all humanity.  Last week, Peter misses the point completely (to be fair, because he love’s Jesus and wants to protect him) and rejects that arguing “No Lord, we’ll never let that happen” at which point Jesus says “Get behind me Satan.”  More than a verbal knockdown, Jesus is telling Him – this sacrifice that He  will make is the single greatest act of love that God has done for humanity.  Even greater than the act of creation.  Because rather than the Creator growing tired with the selfishness and sinfulness of humanity constantly abusing one another and the creation he simply gave them… God loves us this much to become one of us.  To let the evilness of the world to even destroy God on the cross… to suffer that inhumanity, that torture – all to rise from the dead and say Love is stronger…Love is more powerful than evil. 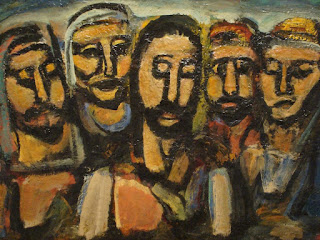 The disciples in tonight’s Gospel didn’t learn from that back and forth between Jesus and Peter (maybe seeing Peter being called Satan kind of scared them from asking some follow up questions).  Because here Jesus is journeying with them again… so they’re alone with him after having been out with the crowds and people again… he reiterates that earlier point:  The son of man is to be handed over to men and they will kill him and three days after his death, the son of Man will rise.  (I like to imagine Jesus saying – any questions? And they all kind of shrug and say “No” and then start talking to themselves)

Remarkably, a little while later Jesus says guys, so what exactly were you arguing among yourselves about.  And it wasn’t their confusion that once again Jesus has told them he’s going to die at the hands of evil men… not what does it mean to rise after that…. They argue who’s the greatest… Who’s the best… who’s Jesus right hand man.  Maybe they were thinking – sure Jesus had called Simon his right hand man – the rock on which he would build the Church… but that was before Jesus had told them about his impending death – and then after Peter argued and said “no way is that going to happen” Jesus called him Satan.   Ahhh – so maybe that’s why they were so quiet this time… let’s just keep our mouths shut and maybe we’ll be Jesus’ number 2.

What makes that beautiful story about the little guy thinking he was offering all his blood to his sick little sister is that in his innocence, he gives us hope that we can hear and understand what Jesus is saying…   Because in short, Jesus’ is not looking for right hand men or women… he’s not looking for second in commands or “Disciple of the Month”.  He’s looking for you and I to become Him.  We are to be Christ for one another.  By serving, by taking care of those who are weak and helpless, by caring for those who are in need.  To be “great” means putting the good of others ahead of my own well being.

The little guy on that gurney was so consumed with his love of his sister, in his heart he was prepared to make the same ultimate sacrifice of Jesus for humanity, laying down his very life for his sister.  For you and I, can we take some smaller, but equally selfless steps?   Maybe reach out to someone who is sick or is suffering.  Maybe spend time being attentive to someone who is in pain or alone.  Maybe help someone who is struggling.   We don’t have to wait till our next community service activity (which is this coming Saturday by the way) to simply volunteer and do something selfless…something loving…something Christ-like. We can be Christ to one another here and now and when we leave this place.  We often imagine that to be Christ like we have to do something big, extreme and grand – like become a priest or religious; like go on a foreign mission or something really grand.  And while those are great things, great callings, we don’t have to get ahead of ourselves.  Listen to the words of Blessed Mother Teresa.  Here is the modern epitome of someone who gives us such an extreme example of being Christ to the poor, the sick and the dying, giving us tremendous food for thought.  She once said: 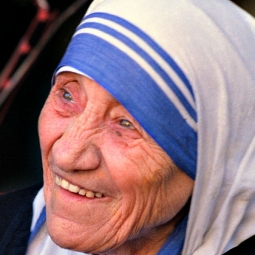 There is a terrible hunger for love.
We all experience that in our lives – the pain, the loneliness.
We must have the courage to recognize it.
The poor you may have right in your own family.
Find them.
Love them. ..
Speak tenderly to them.
Let there be kindness in your face, in your eyes, in your smile, in the warmth of your greeting.
Always have a cheerful smile.
Don’t only give your care, but give your heart as well…
Give yourself fully to God.
He will use you to accomplish great things on the condition that you believe much more in His love than in your own weakness.

Let’s not just imagine the possibilities that can result if we believe those words – but begin here – tonight – in this place – on this campus to actually do that.  What is the mission, who is the Lord putting on your heart right now to be Christ to?