Hi everyone, here’s my homily for the 22nd SUNDAY IN ORDINARY TIME – September 6, 2015. The readings for today can be found at: http://usccb.org/bible/readings/090615.cfm Thanks as always for stopping by to read this blog, for sharing it on facebook, twitter and reddit – and your feedback and comments. God Bless – Fr. Jim

We rather just focus on – yet another – encounter where Jesus does something incredibly remarkable – something miraculous, beyond explanation. So much so, that even on my end of things, I tend to skip over the means Jesus employs – putting his fingers in the guys ears; touching his tongue, spitting on it… It seems so – no offense Lord – disgusting, doesn’t it? And it’s not like it’s necessary. How many other times does Jesus simply perform miraculous deeds by his word? When he’s on the boat with the apostles asleep and the storms are about to sink them, with simply the words Be Still -boohyah, they’re still. When he stands in front of the tomb of his friend Lazarus who’s been dead three days He crys out “Lazarus come out” and He does…

But this one is done- a touch, giving something from within himself – saliva – it’s always been some details that I tried to ignore in light of the bigger miracle that a deaf man with a speech impediment is now freed and able to hear and able to speak.

Yet, if we know that God can do amazing feats without these actions, perhaps there’s an important lesson in that or something for us to reflect on. Namely that: He doesn’t have to use those means but He does. Just like he chooses to use things other than spit, namely you and I to work miraculous things. And he does… Everyday. Just think about it:

– No other creature is able to hold back that angry response to that thing that ticked them off as you and I can. Let alone struggle internally and even get to the point of uttering the words “I forgive you” in response to a hurt. And depending upon what the grievance is – that can be incredibly miraculous. But the point is – Nature doesn’t dictate that type of response. Watch National Geographic –  A bear will maul another bear to death for stealing one of it’s fish. 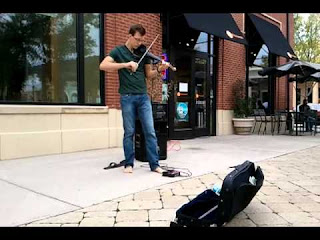 – The other day I was walking in New York City, a guy dressed kind of ragged – playing a violin. The sight of it just struck me. Here are countless people, myself included, with places to go, people to meet. Amid the noise, the everydayness of the city you encounter  something — that when you think about it a little deeper is pretty special.  This thing — this violin – which is basically wood and strings (pretty ordinary stuff) is crafted in such a way by someone and now this other person (let alone how he was dressed or where he chose to share it) can pick it up and make something of beauty that we can’t touch, we can’t see, but can move us from within with it’s beauty. That can be pretty miraculous.

– or-
– Just the entirety of parenthood. How Mom and Dad go from the exciting news that “they’re pregnant” – eagerly, nervously, frantically preparing for the arrival of their child for months; spend countless days and nights, weeks, months and years waiting on their every move, attending to their needs; helping these little creatures learn to eat on their own, walk on their own, speak on their own, eventually think on their own and move out on their own; all for that day when they do… sometimes without much gratitude… Just reflecting on that type of self-forgetfulness that parenthood breeds – miraculous

Jesus’ touch, and his spit are details that shouldn’t be dismissed. But rather they are there to remind us that the creator of the Universe likes to use the things of this earth – the everyday, the ordinary – you and I more often than he does the inexplicable, outer-worldly to perform miracles on a regular basis. Real, bonafide miracles that make the deaf hear and speak; that can bring sight to the blind, that can bring the dead back to life. It’s just that maybe, just maybe, those experiences become too common, too ordinary and sometimes we can become too forgetful of the gifts, the talents, the abilities, the potentials, the opportunities that the Lord blesses us with that make them happen…

Pope Francis a few months ago said that often times “…miracles are performed with what little we have, with what we are, with what is at hand… and many times, it is not ideal, it is not what we dreamt of, nor what “should have been”. (Mass for the Families – Ecuador – July 6, 2015) May you and I be attentive to the miracles that do happen in our life every day – to see how God doesn’t have to, but so often does choose to use you and I to complete them. Quite simply because He believes there’s no better way to unleash His Love, His care to a wounded, waiting world in desperate need of His attention then to utilize some his most precious, prized, handiwork – the special miracles he has already fashioned: you.