Hi everyone, here’s my homily for the 22nd Sunday in Ordinary Time – August 30, 2015.  The readings for today can be found at: http://usccb.org/bible/readings/083015.cfm .  As always, I’m most grateful for your reading this blog, sharing it with your families and friends on Facebook, twitter, reddit – and your comments and feedback.    Tonight is “Pre-Season” here at Newman Catholic… we have students beginning to arrive with classes starting Wednesday.  I’d appreciate your prayers for all of us, especially the students at MSU that they will be open to the voice of Christ in their lives… and that all of us here at Newman will be that voice and loving presence.  God Bless – Fr Jim 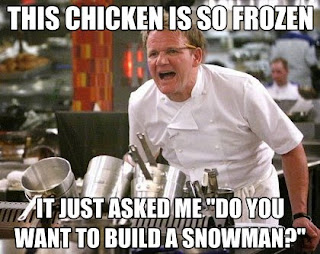 For the most part I really can’t stand reality TV shows. Despite the name of the genre, they seem so, I don’t know, fake to me. Whenever I get a chance to sit down and watch something, it’s usually for a diversion from my own “reality” – so why would I want to be sucked into the “real world” drama of someone else?

But one show that I can’t help but watch is “Hell’s Kitchen.”  For those of you who have not seen this show, there are two teams – a Red Team and a Blue Team. They work under the very critical eye of expert, world-renowned chef Gordon Ramsay.  In any event, the two teams compete to prepare dishes in a restaurant for the hungry customers. Before any of the meals go out, they need to be scrutinized by Chef Ramsay. For some reason, as someone who can’t really cook at all, I find the whole thing hysterical.

Because he’s runs this competition like a Boot Camp, complete with him waking the chefs up at random hours for another competition, forcing losing teams into punishments like going through trash and picking out recycling; and he’s constantly barking orders at the competing chefs and expecting responses that begin and end with “Chef” (like those in the military are required to use, using the word “Sir”) “CHEF, YES, CHEF.”

He’s demanding, and temperamental. If it’s not cooked to his standards, or doesn’t look the way he thinks it should look he starts screaming like a lunatic. Half of the words are bleeped. To one woman he said “I’d rather eat ‘poodle’ BLEEP than to eat that crap.”

Maybe one reason the show is appealing is that for any of us who’s had a meal at a restaurant that was badly prepared (and been afraid to send it back out of fear of retribution) it’s refreshing to see some criticism of the meals. “THAT’S RAW” he yelled about a pork dish that was about to be sent out – “LOOK AT THIS, WOULD YOU PAY FOR THIS” he screamed about some fish dish.

In the heat of the competition, obviously, people get angry. And you can’t help but wonder why do these chefs even put themselves into this situation to be treated like this.  But for a lot of these competing chefs enjoy the experience because they know Chef Ramsey knows what he’s talking about and that he’s simply “telling it like it is.” As one former contestant put it: Gordon Ramsey is constantly searching for that green apple that fell from the tree and is looking to become ripe. That’s what he wants…he prefers to mold raw talent. [And] If he’s going to have someone working for him, he’s going to need someone he can continually build…The will to never give up is the key…If you have a solid cooking foundation and a will to not give up, you find yourself to be more successful than others on the show. He wants a soldier…he doesn’t want anyone who succumbs to his [barks like] ‘you stupid donkey’. The most challenging thing is…understanding how important it is to let go of ego. Letting go of ego is key…

This particular chef reflected: Ego became the hump for me. I learned how important it is to be able to let it go and, perhaps, accept the fact that the flaws in your game make who you are a bit more penetrable.

Listening to someone who tells it like it is and letting go of one’s ego isn’t simply the way to win ‘Hell’s Kitchen’ but a great recipe for life (bad pun, I know) and essential in our spiritual lives as well.

In today’s Gospel, we have these Pharisees. And they remind me of chefs who thought they knew everything about cooking. They consider themselves the experts in living a good Jewish life; the experts in holiness. And like little kids who see another little kid messing up and are excited to tell the teacher, we hear them today saying “Uh, Jesus… JESUS – do you see that? Your disciples are eating their meals wrong, they’re ‘unclean’ – they didn’t wash their hands right.”

The Pharisees were going beyond a hygiene issue. They were upset that the disciple’s weren’t following the exact letter of the “law” of their ancestors. They were pointing out that they weren’t being attentive to some of the minor traditions that had been past down. They took these minor infractions and made this leap, this judgment, and condemned the disciples, saying “Jesus your disciples aren’t good Jews. Jesus these ones who follow you, who are your closest friends aren’t holy people. Jesus these people are in fact ‘unclean.'”

Now the Pharisees have pretty big egos, and probably weren’t expecting Jesus’ to tell it like it is. He doesn’t really deal with the disciples’ cleanliness but, rather, turns it around on these infraction-finding Pharisees and asks, “Is that really what’s most important?”

Because the Pharisee’s were hung up on how they looked, how they appeared, they wanted to be applauded for following the letter of the law. Meanwhile, in their hearts, where was their love for God?   Because if they truly loved Him, searched for Him, longed for Him, they would have been like the disciples, who had left everything, including their egos, and were following God’s son – were growing in love of Jesus day by day as they listened to him constantly “tell it like it is” so that they could grow into the true sons and daughters God the Father had created them and was calling them to be – rather than just being worried about a minor infraction.

Jesus is telling it like it is, and it makes the Pharisee’s uncomfortable and should make us uncomfortable as well, because 2,000 years later, it’s possible for us to make that same mistake. We can go to Mass on Sunday, say some prayers, wear a crucifix and have hearts that are far from God. Making sure that our appearances are perfectly Catholic, while not dealing with the sinful thoughts, actions and desires holding us back – particularly that jarring list he offers at the end of the passage.  Listen again to Jesus’ words : 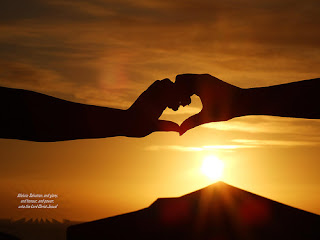 From within people, from their hearts,
come evil thoughts, unchastity, theft, murder,
adultery, greed, malice, deceit,
licentiousness, envy, blasphemy, arrogance, folly.
All these evils come from within and they defile.
Jesus is warning us that these things sabotage our desire to be God’s beloved sons and daughters, blocking us from experiencing true joy, true happiness, true peace.

What a gospel for us at the start of a new school year!   Walking on campus today as we welcome new “Red Hawks” – bumping into returning students you can feel the excitement, the enthusiasm… but also the tension, the fear (especially for parents leaving their sons and daughters here for the first time) What will their days, weeks, years here be for them?  The temptation to “look” right, to “fit in right” is in overdrive right now.  In this environment, even the exterior appearances that Jesus warns us not to congratulate ourselves on accomplishing – just coming to Mass or wearing that crucifix – those things can be incredibly challenging.

Somehow though – we made it here.

Somehow we were able to hear that gentle voice that tells us not to give into the loud shouts of many loud egos that can surround us and question or mock this choice.

In this Mass, in this His word and in the Eucharist, where we receive His Body and Blood, we find Jesus meets us, embraces us, encourages us to persevere in our faith and in fact to go deeper.  To see that, yes, the surroundings, and the environment around us can make it difficult to live the life He calls us to. But in those choices, those decisions are made in our hearts. If we are able to let go of our egos, let go of ourselves and our preoccupations – we too will be able to hear Jesus speak his loving word, his challenging word… Hear him continue to tell it like it is.