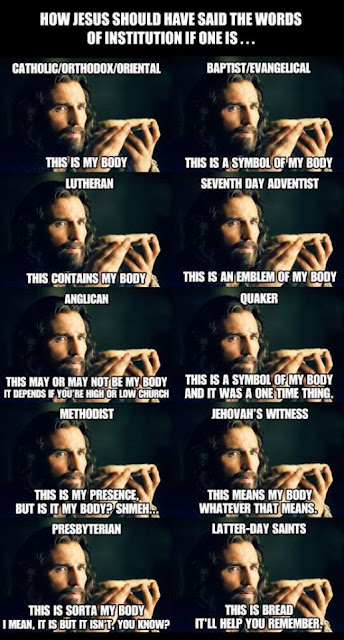 Hi everyone – hope you’re enjoying your summer.  Here’s my homily for the 20th Sunday in Ordinary Time – August 16, 2015.  The readings can be found at: http://usccb.org/bible/readings/081615.cfm  Thanks as always for reading, sharing this blog on Facebook, Twitter, Reddit – and your comments and feedback.  God Bless – Fr. Jim

Growing up, one of many expressions that was drilled into my brothers and I by my parents was to “Say what you mean and mean what you say”.   Even at a young age, it’s pretty simple and self-explanatory to understand.  Perhaps because it was so drilled into us, I find it incredibly frustrating when that doesn’t happen in my daily life.

This summer for example, at the Newman Center we’ve had to get all kinds of work done after a tree crashed in.  So all summer it’s been construction people, insurance agents, inspectors, and on and on coming and going.  Appointments have been delayed, missed, forgotten about on a regular basis – which sadly for the people who work with me on a daily basis, knows makes me crazy.    A painter tells me “We’ll start the work at the end of July and it should be about a week” – in reality turned into starting this past Monday and as of yesterday afternoon there’s still drop cloths all over the place and it’s a big old mess. (*I should note, my frustration here isn’t just that what they said didn’t come to pass, but that now with people moving back in and the start of the semester coming, I had specifically wanted to avoid all this going on right now)

But even apart from the adventures at the Newman Center… I see I have a Doctors appointment in a couple of weeks on a Monday morning at 10 am.  By now, I know that this routine, in and out thing is anything but.  So even though it says 10:00, I know not to have anything scheduled till after 1:00 because I’ll be sitting and waiting, to get into the exam room, waiting for the nurse to come in to tell me the “doctors running a little late”; waiting for the nurse to come back again to tell me “I’m the next person he’ll see”; waiting after he has seen me for the nurse to come back to give me a printout with my next appointment/ followup stuff and then waiting to square up my insurance/bill stuff.    That 10:00 appointment is more accurately an 11:45 appointment…

That’s why I’m grateful when I encounter the opposite – when people truly keep to saying what they mean and meaning what they say – Like I have a person who’s coming for spiritual direction on Tuesday at 2:00 PM – who will be at my office by 1:50 PM, who’ll email the night before to confirm again… He’s a pretty reliable guy.  I know I can count on him when he says he’ll be there at 2:00 – He’s there.

It seems somewhat trivial thing, but it often reveals something that’s not trivial.  We often come to realize people in our life that we can be confident in their word.  They have proven consistently that – they say what they mean and mean what they say.  Whether it’s something routine like setting a time for an appointment or in matters that are much more important.

Like when you’re going through a crisis or a trauma.  You will often have people who will say “if there’s anything I can do for you – let me know… I’ll be there.”  I’m sure everyone means that on some level, but unfortunately, they are missing in action soon after.  At the same time, there will be others, who will go above and beyond what any of us could have ever imagined in those moments of crisis – shining forth as true, best friends.

Reflecting on today’s Gospel you get that “Saying what you mean and meaning what you say” vibe…  For the last few weeks we’ve been reading this section of the Gospel of John where Jesus has been speaking more and more about the need to consume the bread that endures for eternal life; the food that will sustain us for eternity… And now today, Jesus is even more direct saying that we need to “eat his flesh and drink his blood.”   This point – this quote is one of the biggest differences between us as Catholics and those who’ve left the Catholic Faith and become one of the hundreds of Protestant denominations over what we believe in terms of communion.  Because some will argue:

He can’t mean what he says and argue that Jesus was speaking symbolically or metaphorically.    Yet, Jesus has said this, what, 7 times in this section of John.

Well he must be talking figuratively or poetically – that this is some form of parable some will counter.    Yet Jesus never interrupts or corrects the “confusion” of the moment.  We don’t have Jesus  clarifying  that this is a parable or that he meant this as a symbol or re-interpret this to mean anything other than what he very bluntly, shockingly has said to his followers. 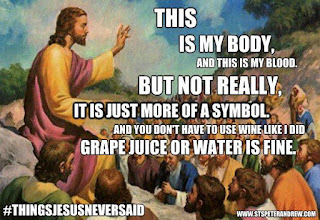 So the disciples were left with the incredible realization that Jesus really does means what he says and says what he means…  And why not?  Jesus has never given them any reason not to trust his word.  He’s preached words that have touched their hearts and souls.  He’s astounded them with miracles that cannot be explained…

Yet, this call to faith, this miraculous, intimate gift that he’s offering – His very Body and Blood given to us to be consumed by us becomes very troublesome for these followers of Jesus.  So much so, that in next week’s gospel, we’ll hear how this will be a moment of departure for some… and continues to be.

It is hard for us to believe that God means what he says and says what he means at times.  Often times that’s  because we approach things from our own view of the world.
I want this person to find a job…
that relative to be healed…
that friend to be more faithful…
and when things don’t happen the way that we want, we immediately assume God isn’t faithful, isn’t listening, isn’t keeping His promises to us.

Eat my flesh… drink my blood.. Whoever [does so] remains in me and I in him.. Just as the living Father sent me and I have life because of the Father…

So in one of those topsy-turvey, didn’t see that coming revelations – Jesus points out to us
– we say we are his followers and that we believe in Him
and Trust in Him
and Have Faith in Him.