Hi everyone… We’re on our last day of Pilgrimage.   Here’s my homily for the feast of St Thomas the Apostle (readings at usccb.org – July 3)   Thanks as always for reading and your feedback – and prayers 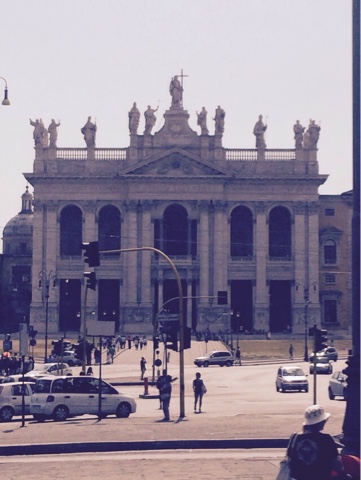 St. Thomas, the Apostle who’s feast day we celebrate today gets a pretty bad rap.  Think about it if you were asked how you’d like to be remembered 2,000 years later in three words or less, how amazingly difficult that would be.  Yet for the apostles, we seem to have a bunch of them: Peter – The Rock; John – The Beloved; Judas – The traitor…  And in those three cases, you have to admit that scripture and tradition seemed to have gotten those just right.  Peter as the first pope, with all his strengths and weaknesses led the Early Church after Jesus’ Ascension and proved to be a firm “rock” of leadership for the Church.  Judas, despite whatever good he might have done in his life, after selling out Jesus for 30 silver pieces, well, it’s kind of hard to recover from that and so, he’s simply known as the traitor.  And John, the faithful friend of Jesus, the only one of the 12 to stand at the foot of the cross, the one Jesus entrusted the care of Mary, His Mother for the rest of her earthy life, it seems obvious why he is remembered as “the beloved.”

But ask many people about Thomas – an almost immediate impulse is to label him in a similar way as “The Doubter.”  We even use the term calling someone a “Doubting Thomas” to describe someone who’s negative or cynical – all because of his giving voice to to the disappointments that he had with himself and the others as he speaks with candid honesty in saying “I will not believe.”

Seriously, why wouldn’t he react like that?  As we visited the Sacra Scala, as we visited this church of Sancta Croce with the relics of the Holy Cross on  this last day of our pilgrimage – we know these aren’t just historic artifacts or pious relics to look at curiously.  They put the passion, the death of Jesus Christ front and center.  And looking and reflecting on these things, these sites from St. Thomas’ perspective – well we have to image that there was so many things that had happened that he couldn’t believe, couldn’t wrap his mind around that gave birth to his doubts:

– It was scandalous to him that Jesus would be betrayed by one and denied by another of the chosen 12.

-It was horrible for him to consider that the rest of them couldn’t or wouldn’t be able to do anything to stop what had happened to Jesus;

-It was unimaginable to him that the one who had given them faith, hope and love; the one that they had left everything in their lives behind to go and follow – that Jesus  was left for dead on a cross.

That three days later, he’s hearing these reports  that Jesus had been raised from the dead,

that Jesus had accomplished what he had promised he would,

that indeed hell has been defeated,

that death has been conquered.

Thomas is hearing all of this remarkable news from the same people who had been such failures so recently, who could blame him from being beyond skeptical?   So Thomas’ seems to dismiss this incredible news of the Resurrection of Jesus, an event that would change human history forever with those simple words “I will not believe.”

But if we are able to move past his impulse his initial moment of heart-wrenching honesty, maybe we can look at Thomas in a different light and even consider changing the idea of Thomas being labeled “the doubter” to something else… Perhaps Thomas “the faithful.” Because in truth, his doubting words don’t match his actions of faith.

Because the week after this whole “doubting” scene, look at what happens – Has he let his doubts drive him away from the others? Has he let his unbelief discount all that he had come to believe that Jesus had taught?  Does he let his realization of what complete and utter failures he himself was as well as the others were in not standing up (or even standing by) Jesus at his hour of need, does he let that  drive him to loneliness or despair?   No, a week later, we find Thomas is there in the locked room with the others.  Because he remains faithful WITH his doubts, because he has been honest about his unbelief, Jesus the risen savior is able to meet him.  Jesus is able to heal him of the unbelief that had been so deadly to the heart of the believer.   That’s why Thomas can be such a great model for us.

Because truth be told, We have our doubts too, don’t we?  Sometimes it’s borne from the actions or lack of actions from others.  We know that there are things, scandals that have plagued our Church over the last few years and every time the news reports one of these things they bring a flood of angry, disappointed, heartbreaking, nauseous feelings to all of us.   We have our doubts about our politicians, our government leaders… Seeing tension, animosity, extremes fighting each other with no compromise in sight that leaves us questioning our faith in those institutions.  Closer to home there’s things that makes us wonder, makes us question, makes us doubt.  Things that undermine so many important aspects of our Christian lives.   Sickness, death, divorce, people who are suffering – all those different intentions we’ve had with us all week, when we return home and are away from the beauty and the amazement of this place and this time, those intentions can sometimes return to simply being crosses in our lives that have the potential, if we allow them to, to be deadly to the hearts of us believers as well.

Thomas, formerly known as “the doubting” – Thomas the faithful though gives us an essential lesson to deal with all this:  and here it is – Having doubts is okay… giving into them is not.   Because that night when Thomas encounters the risen Christ as he gathers in that locked room full of flawed, failed, broken individuals like himself, yes as he gathers with the Church… It is there that he realizes something within him that wants to see past the scandal of the cross, that something within him wants to see past his own doubts and disbelief.  When he does his vision is transformed:  All he is able to see is the hands and the side as he beholds the risen Jesus Christ in his midst.

For us that is the challenge that we face as our Pilgrimage draws to a close.  Will we accept the challenge? Not to deny our doubts, but not to give into them either.

Rather, – bringing them to the Risen Lord who we encounter at every Mass in the Eucharist where his body and blood are present among brothers and sisters who are also pained by scandals,

– bringing them around the altars of our home parishes knowing we are all united by that Eucharist as one universal family who shares that very common bond and hope, wishing to move past the legitimate fears we are so often challenged by from some harsh realities of the world;

-bringing them among others who have also doubted that God is so interested in us loves  us personally that He actually has a dream for us… A dream that if we ever truly considered it could radically open our hearts and minds to conceive something greater for ourselves than we ever imagined.