Hi everyone.  Thanks again for following along on our pilgrimage.  Today we were blessed to celebrate Mass at the grotto of the tomb of St Peter which is beneath the main altar of St Peters Basillica.  The readings can be found at usccb.org for Thursday July 2, 2015 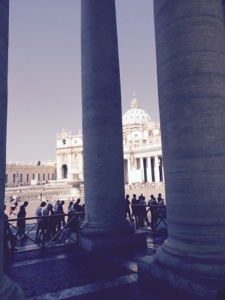 Do you ever encounter people of such great faith it just humbles you… makes you wonder if you’re able to trust like them, believe like them, forgive like them – love like them – and you somewhat suspect the answer to those questions would be no?

About two weeks ago, in the United States we had that horrific news of that disturbed young man who unleashed such atrocious evil, shooting and killing 9 people in a South Carolina Church – after sitting with them for over an hour as they studied the bible, prayed together…  They were so sincere, so genuine, so loving the killer admitted “I almost didn’t kill them because they were so nice.”  It was sickening on so many levels.  And after so many racially tensed incidents over the last year that have been broadcast and regurgitated on our 24/7 news cycles, was another concern for many that this could explode into something even more heinous.

Not two days after the murder, as the killer appeared before the judge, an absolutely amazing thing happened.  The relatives of those who were killed got to address this young man in court.  Some sobbing, some with their voices shaking and breaking down mid sentence – they all expressed that they forgave him.

I thought of that amazing incident, amazing forgiveness, amazing love, amazing faith – as I read this first reading from Genesis.  Here Abraham and Sarah’s first born – the one they longed for, hoped for well into their advanced ages.  And God calls Abraham to “sacrifice him.”

There’s a whole lot going on here that troubles our sensibilities:  Why would God ask him to do such a thing in the first place – the quick answer, for Abraham to recognize how deep his faith truly was – that Abraham got to a place where he knew and trusted the same God who somehow brought Isaac into existence in the first place would somehow make sense of this as well)

But in a similar way, we can see how these courageous family members from South Carolina recognized the command by the Lord to offer their radical forgiveness, in a sense is just as troubling to our human sensitivities.  Our human condition constantly pecks at us to ignore what faith call us to, doesn’t it?    There would be plenty of commentators, many of us who would say “we totally understand” had the family member who just had their loved ones killed  in a Church – had called for revenge, if they cursed the guy…  Just as there’s a part of us who might feel that hearing that first reading we would totally understand had Abraham said to God – I can’t – I won’t do that.

Which is why we’re in the perfect place.  Not just God’s house.  Not just this most beautiful basilica in the world (I feel safe making that declaration even not having seen all the other ones)  But here, at the tomb of our first Pope – St. Peter.  Because in St. Peter, we see a man who we can relate to those feelings probably better than most.   He wanted to have the faith of Abraham, He wanted to have the ability to love and forgive as Jesus commanded – but so often (and very often publicly) fell short in dramatic ways:   asking Jesus in the Gospel of Matthew – so how many times do I have to forgive someone???  Declaring “I don’t know the man” just hours after promising he would follow Jesus wherever he went – even if it lead to his own death.

But one thing St Peter reminds us is that faith, and trust – it’s kind of a chicken and egg thing – we don’t really know which comes first.  They’re so intertwined.  And to be a true, obedient disciple, you need both…  Peter shows that even though he personally failed in his own faith at times- he still trusted in Jesus’ words, Jesus’ teachings, he still trusted in Jesus’ faith and trust in Peter.  That caused him immense personal suffering (after his Good Friday denial, the Gospels tell us he wept bitterly) But it also enabled Peter to not forget, not lose his trust that the same Jesus who offers his Mercy and forgiveness so radically like he did to the paralytic in today’s Gospel (as well as curing him) that Jesus could do that for Him as well… not just 7 times…

That trust he had for Jesus would constantly call Peter back to the Lord, calling him to deeper faith, deeper trust himself – till the day Peter humbly, willingly offered his very life as a martyr not far from this very spot where we stand now, where he is buried.  The fisherman, the rock that Christ would build his Church upon was far from perfect throughout his following, his discipleship, his papacy.  But his honest, sincere, heartfelt attempt… His ability to keep getting up and going to the Lord for forgiveness is what ultimately transformed him into the Rock that Jesus imagined him to be.

May you and I who look to St. Peter as an example, an inspiration– ask for his prayers when we struggle, when our faith and trust aren’t as in sync as they need to be for us to truly become transformed into the disciple of Jesus Christ, He imagines us to be.