Hi everyone.  Thanks again for checking in.  Here’s my homily for WEDNESDAY 7/1 – given in the city of Orvietto.  After Mass this morning we return to Rome.   God Bless – Fr Jim 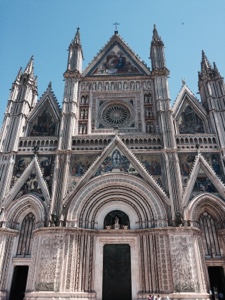 Every once in awhile people will ask – What’s the hardest thing the hardest part of being a priest?   From their reactions they seem to have certain expectations of what they think the answer will be: The promise to remain chaste for life – forsaking having a wife and family? The promise of obedience to the Archbishop – recognizing that any day the Archbishop could call and say “I need you to go to a new assignment” – and there’s an expectation that you would put aside your wants, desires and say “Yes” – for the good of the Church.

There’s some truth to those examples – and other challenges come to mind. But over the last 16 years of priesthood – for me, the hardest part has always been the extremes that a priest can encounter just in the course of one day. Being a part of one family’s incredible joy and then another family’s incredible pain in the matter of a few hours.  That became crystalized early in my priesthood when on this particular Saturday I ended up celebrating 5 Sacramental encounters:  A morning Daily Mass; a Funeral Mass; A wedding Mass; a 5:30 PM Saturday night Mass and then giving someone in the hospital who was sick and dying viaticum – his last communion before his death.

As prepared as I thought I was – homilies printed out in different colored folders (don’t want to mess that up!) I had no idea how difficult that was going to be.  Seeing a family devastated at the funeral mass for a young person who died in a tragic loss and a few hours later family’s (with similar aged young people) gathering to celebrate the joy of uniting a husband and wife… two regular parish masses with people on all ends of emotional specturms themselves – then driving up to the hospital and being witha family who’s loved one had been suffering from cancer for some time.   It was a lot to encounter.

It was during the 5:30 pm Mass that I had a spiritual revelation that has never left me. When we were preparing the altar for now the 4th time, and I saw parishioners gathering again to bring the bread and wine up the altar that it clicked that I had seen this happen 4 times in this very Church, to very different congregations. First to a group of mostly elderly parishioners who faithfully attend Mass every morning; then to a Church of people – some stunned, some numb in grief; then to family’s filled with joy as well as fear as they watch two young adults make one of the biggest steps in their lives – to now at the end of the day, 300-400 ordinary parishioners ranging from newborns to 80 something’s gathering together as they did week after week. In some ways, each of these Masses couldn’t have been more different.

Yet they all came to the same altar. They all came, as they were, looking to be fed with the Body of Christ.   Part of the sadness was my own expectations not being met. Because:

That Eucharist I wish I could say instantly removed all pain and grief for the one family.

That Eucharist I wish I could say just as miraculously transformed everyone’s “ordinariness” into something “extraordinary” as bread and wine becoming Jesus body and blood did.

But sadly that wasn’t the case. People still sobbed. I’m unsure of what happened to that couple the days, weeks and years since they left after they got married and moved out of state… and taking a look around during that 5:30 – despite my best efforts, some people were yawning and didn’t appear to have changed much during that Mass.

But I realized those were my own expectations that were messed up – and I walked away with a new appreciation. What everyone had in common; what everyone desired on some level (whether they could ever articulate it completely or not) – and very personally what I knew to be true at the end of that long day – what had sustained me, and nourished me – we all wanted Jesus’ very presence in that Eucharist: Mourners, wedding-guests, parishioners from every extreme imaginable – that was we all sought.   And in all those moments throughout the day He himself fed us with his very flesh; He himself quenched our thirst with his very blood.

It was Jesus’ presence, and His presence alone that every group of people desired on some unspoken level. It was Jesus Himself that would be with one family in their darkest, most painful moment – and that He would remain with them every day, as they tried to come face to face with this loss in their lives. It was Jesus Himself that was the guest at this Wedding Feast – who would remain with that couple in good times and in bad, in sickness and in health – all the days of their lives. It was Jesus Himself who made the ordinary extraordinary and that daily, weekly nourishment would impact and change the lives of every soul who welcomed Him, received Him – really consumed Him and allowed Him to change their very lives.

That’s the thought that came to mind… so often as Catholics we struggle with doubts over the Eucharist and because we tell ourselves that we’re bad Catholics if we struggle or have doubts we suppress them even more.  Yet I think it’s our expectations about the Eucharist which is what gets us tripped up rather than any serious question of faith…  Which is one of the consolations we should take being here… in this beautiful place here in Orvietto.  Here in the 13th Century, a priest who is described as pious — in the deep recesses of his heart, where he was most honest with the Lord, he revealed his doubts, his reservations how the God of the Universe could somehow be really present in a piece of bread and cup of wine.   As he celebrated Mass, he hadn’t even gotten to the words of consecration and inexplicably blood started to come from the host onto the priests hands and onto the corporal and altar cloths.  Making this place a place of pilgrimage.

What is part of the exciting thing about our relationship with the Lord.  He knows specifically what it is we need at the time we need it.  Instead of comparing and allowing jealousy and envy to enter in when we don’t experience something like that miracle (as much as there’s a part of me that would myself, there’s another part that thinks maybe not that….) To look for, to have wider visions and see what God is doing in our lives… To trust and believe how He is very real, very active, very present not just at Mass, but when we leave the walls of the Church.  To appreciate despite how profound a gift, a mystery, that is the Eucharist… what it is we actually believe it to be:    Jesus’ promise of his abiding presence to all who receive him… In the midst of our daily struggles, in all the crazy extremes of life that all of us inevitably encounter moving from joy to sorrow and sometimes monotony in the day to day.  Yes  this place of pilgrimage reminds us at every Mass to look for something miraculous – to look for Jesus presence in the Eucharist to transform us, to guide us – and calling out to us to do as he does: to lay down our lives, to give, to share… to in fact love Him as He loves us… to make that real presence real in the lives of others. 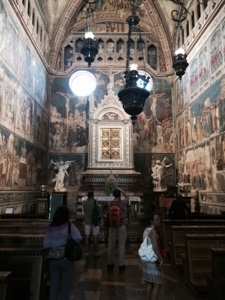