Latest News
Home /Blog/JUDAS OR JESUS– WHO DO WE REFLECT?

Hi everyone, here’s my homily for PALM SUNDAY OF THE LORD’S PASSION – March 29, 2015.  The readings for today can be found at http://usccb.org/bible/readings/032915.cfm.  Thanks as always for stopping by to read this blog, for your comments and feedback and for sharing it.  God Bless you this Holy Week as we renew ourselves in the amazing Love of God for us…  Fr Jim

Leonardo Da Vinci – the 15th Century artist, sculptor, architect, musician, mathematician, engineer, inventor, anatomist, geologist, cartographer, botanist, and writer – who’s genius is still appreciated all these centuries later once told a fascinating story about the creation of one of his masterpieces “the Last Supper.” When Da Vinci started working on the painting, he lived in Milan. As he set out to paint the piece he decided he wanted to find a young man to pose for each of the persons in the painting. He wanted to find someone he imagined might look like what Jesus would look like; someone he could conceive of how the disciples might have looked like. So he began to search in Milan.

Some days he would walk the streets for hours at a time, looking at men’s faces, searching for his disciples, searching for his Jesus. One day he was in the Cathedral in Milan, and during Mass, the choir was singing and he looked up into the choir loft, and he saw this one young man who looked like what he thought Jesus would look like. He approached the young man after Mass and asked him if he would agree to pose for the painting. The young man agreed and he came to DaVinci’s studio for 4 or 5 days in a row and every day sat there for many hours on end while DaVinci painted him. When he was finished, DaVinci thanked the young man and he began his search for the 12 disciples.

One by one he found the disciples. The search was not easy. It took years. After three years he found all his disciples…except one – JUDAS! He couldn’t find himself a Judas. And he would walk through the Milan streets for hours and hours a day, and he became quite frustrated. Four years passed, and still he had found no one to pose for the person of Judas.

So, he decided that he was looking in the wrong places. He decided that if he was going to find the person of Judas, he had to look in places where this type of person would congregate. And he began to search in the prisons on the outskirts of Milan. At the time, there were five prisons. He went one after another and finally in the fourth prison, he found a young man who looked like he thought Judas would have looked. A harsh face, with a scar here and there and a certain look of resentment. Impatience in his eyes. He explained to the young man what he was doing. He asked the young man if he would agree to come and pose for the painting. The young man agreed and arrangements were made to bring the man from the prison to DaVinci’s studio in Milan. There in the studio, DaVinci set about finishing his masterpiece.

Leonardo continued painting, but about a half hour later, DaVinci noticed that this sadness had grown so deep that he thought that at any moment the young man would burst into tears. He stopped again and he said to the young man: “Is there something wrong, have I offended or upset you in some way?” The young man put his hands over his face and he began to weep inconsolably. After several minutes, he began to compose himself. He looked up at DaVinci and he said: “Master, do you not recognize me?” and DaVinci said, “No, I am sorry, I don’t. have we met before?” and the young man said “Yes. Seven years ago, I posed for you in this same painting as the person of Jesus.” 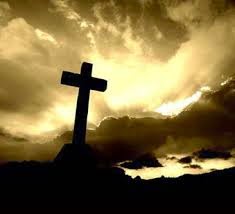 As we’ve just heard and participated in the proclamation of the Passion of Jesus Christ, recalling the events of the week culminating in his Crucifixion, it’s easy to detach from it and look at it like some drama that we’re familiar with but not apart of. Yet the truth of the matter is quite different:

Within each of us is the capacity for great love, as well as great evil. We can respond to God’s grace in our lives and participate in the very life of God and resemble Jesus Christ; or in our sinfulness, our image can become distorted, and we reflect even a Judas.

From the Cross Jesus looks out at those in the crowd, he cannot help but notice, some of those people beneath the foot of the cross were waving Palm branches at him, just 5 days earlier. For some reason, they had made a bad choice. For some reason they had chosen “evil” rather than good.

Jesus knows for sure that within us we have the capacity to reflect Him or to reflect his betrayer Judas. The complex choices we make between good and evil, right and wrong affect us, affect who we are, and who we most resemble.

Holy Week confronts us… makes us uncomfortable… Asks us to look in the mirror. What does your face say about your life? Who do you resemble? Whatever your answer, the good news is that’s not the end. As long as you have a face to look at, you have opportunities to take steps to look more like Jesus.

He is not looking at us like a finished product– or a completed painting — that there’s nothing more He can do with us.   He looks at us with Love. He asks us to trust that Love.  He invites us to journey with Him in the act of supreme Love to Calvary, to the Cross where the first words we hear from Jesus crucified on the cross won’t be “Why have you done this to me”, but a profound statement of amazing love Father forgive them, they know not what they do.

Yes, it needs to start at the cross. There is where we acknowledge the times when we’ve been like Judas, reflected Judas instead of following His lead. We have a choice to either cling to His Cross or release it and trust in ourselves.  In trusting Jesus, God will wipe away those Judas images and draw out the Jesus Christ that is within us to the forefront.