Hi everyone, here’s my homily for the FIFTH SUNDAY OF LENT – MARCH 22, 2015.  The readings for today’s Mass can be found at: http://usccb.org/bible/readings/032215-fifth-sunday-lent.cfm.  As always, thanks for reading, sharing this post on facebook, twitter and reddit and all your comments and feedback.  God Bless – Fr Jim

HOMILY:
The headline from the Huffington Post read: “Louisa Manning – the sort of heroine this   [crappy] world needs”(it actually didn’t say “crappy” but while “journalists” don’t have a problem using the “S” word.. its hard to think it’s okay in a homily to do so)… I read that and thought “Oh boy.” 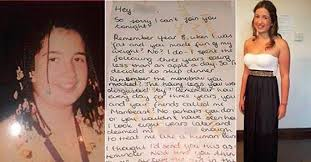 A couple of months ago, 22 year old Louisa became an international story for standing up to a bully from when she was in 8th grade. Louisa’s a student at Oxford University in England, and at some dinner-dance, formal on campus, she bumped into one of the guys she knew from back in 8th grade. He was pretty surprised to see how much she had changed in the years since they last saw each other. According to Louisa, he made an ‘objectifying comment’, and remarked how different she looked compared to before and then asked her out on a date, as one report characterized it: “Either not remembering how much of a jerk he was before, or just thinking that Louisa would put up with the fact he used to be a jerk to her.”

Manning accepted the date, but instead of showing up, she had the waiter deliver this handwritten letter to him with a picture of herself at age 14. The letter went:

Hey (NAME OBSCURED
So sorry I can’t join you tonight.
Remember year 8, when I was fat and you made fun of my weight? No? I do – I spent the following three years eating less than an apple a day. So I’ve decided to skip dinner.

Remember the monobrow you mocked? The hairy legs you were disgusted by? Remember how every day for three years, you and your friends called me Manbeast? No perhaps you don’t – or you wouldn’t have seen how I look eight years later and deemed me (EXPLICIT) enough to treat me like a human being.

I thought I’d send you this as a reminder. Next time you think of me, picture that girl in this photo, because she’s the one who just stood you up.
Louisa’s story has a very human, very understandable element that made it go viral. We can see, we can hear, we can empathize the pain that this young girl experienced. We can get a sense of the hurt to her self-image, the physical harm that this resulted in from being treated so poorly. Being bullied by some thoughtless peers of hers. Even with the praise of many in the press and celebrities, even with the attention she’s received as the story has spread from continent to continent – when I went to her facebook page to read some more details of this story, some of her posts ranged from anger, to defending herself against as she termed them “haters.” There was also one slight addendum to the story that “the boy in question has since apologized.” From the story and comments – you see that Louisa may have developed a much thicker skin, and was able to stand up for herself in a way that I’m sure she wished she could’ve done 8 years earlier. But, she’s still very hurt, still understandably angry. And in some sense this whole episode – after the crowd is done cheering and applauding her for standing up for herself in such a bold, dramatic way – it just seems worse. Did the guy express true remorse? Was he moved to compassion and shame for what he did? Will Louisa ever feel whole, ever feel that self-love that has eluded her since being treated so badly?

We all encounter painful, difficult, sometimes seemingly crushing challenges throughout our lives. Sometimes it’s a result of our own poor choices, our failures, our sinfulness. Sometimes it’s the result of the poor choices, failures and sinfulness of those around us. Whichever the cause of these wounds, these little deaths that we experience – what do we do with those things? Do we allow it to embitter us? Do we give in and let it destroy us? Change us into being much more protective- isolated from those around us (and less receptive to everyone)?

One of the lines in the Gospel we just heard proclaimed has Jesus saying “The Hour Has Come.” Those words are meant to usher us into these last two weeks of Lent which are sometimes referred to as “Passion-tide” (meaning the Passion of Jesus Christ)

The Church’s focus for these last days of the season of Lent is drawing utterly and completely on commemorating those historic – life changing events, those sacred mysteries of Jesus’ Passion, Death and Resurrection – celebrating those things which are central to who we are. The events that transform Jesus from being simply some great moral teacher, just a profound philosopher, or some amazing humanitarian. Jesus Christ is the Son of God – God become man who’s single mission in life is to save you and I from Sin, from death. That’s it.

And we still stand in wonder, amazement at how that all takes place. 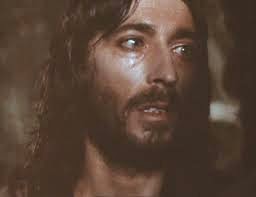 Because think about what we just heard tonight in what is basically the prologue to the Passion. Jesus reveals that he knows what’s about to happen to Him: the backstabbing, the betrayals, the abandonment, the lies, the slanderous lies that will be told about him. The orchestrated plan to eliminate him. Not just eliminate him but discredit him, embarrass him. How the stage will be set to make it very easy for everyone to bail on Him. Next Sunday as we participate in the lengthy reading of the Passions of Jesus Christ, we have to recognize that it nowhere near does justice to the intensity, the painful depths that Jesus would suffer for us.

Yet before we get there, as Jesus acknowledges to his listeners what’s to come, He is also telling us something quite profound. He’s not warning people who will play central roles in his brutal death not to think about doing it or He will “get even” with them. He doesn’t demand promises of loyalty saying “I’ll remember who did (and didn’t) stand by me.” He seems simply to be saying- no matter what, I’m not giving up on you.

I’m not giving up on you when you let me down.

I’m not giving up on you when you betray me.

I’m not abandoning you even when you’ve abandoned me.

I’m not giving up on you, even after all these cures and healings people have experienced and others have witnessed doesn’t seem to have been enough to reveal to you who I truly am;

I’m not giving up on you even after all my messages revealing the absolute Love that God has for each and everyone of you hasn’t convinced your skeptical hearts.

I’m not giving up on you even after I’ve reached out to the ends of the earth – to those rejected by “the world” and dismissed as ‘outcasts’ to show you how vast, wide and deep my love for you – and your brothers and sisters hasn’t won you over.

No matter what, I’m not giving up on you.

In fact, basically Jesus is saying tonight, if need be, you can even rip me open – and see my heart for yourself… That heart won’t turn to hate. It won’t look for vengeance. God: Father, Son and Holy Spirit reveal in unified voice as Jesus reflects on these things and says “Father glorify your name” and the voice of God the Father is heard I have glorified it and will glorify it again. 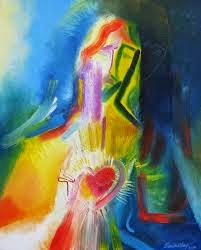 As Jesus contemplates what is before Him, the Father and Holy Spirit are united with Him in this moment where the love of God is revealed as stronger, deeper, and more absolute for humanity than has ever been said, or ever known before in History. He will allow these unjust, horrific events to unfold – not fighting, not pleading, not trying to persuade – simply accepting it and showing the strength of His heart. He’s willing to accept the Cross, the Passion, the Dying. He’s willing to do that to show the Glory of the Resurrection when he will rise from the dead… to show the depths of Love. That love isn’t just a warm feeling… or a romantic notion. Love is being lost in the eyes of the beloved… that there’s nothing you wouldn’t do, even giving up your very life for the one you love.

That love makes forgiveness of our enemies possible.

That love makes healing not simply a longed for desire but a reality.

That powerful love Jesus has for you and for me calls us to love Him in return by following Him and showing the light of His powerful love here in our world, in our lives, in our families, in our dorms and classes, in our community of Newman Catholic, in our campus of Montclair State…and beyond… now, today.

The Hour has come… once again. Will we glory the Father’s name?