Hi everyone… here’s my homily for the SOLEMNITY OF ST. JOSEPH – MARCH 19, 2015 given at Our Lady of Lourdes, West Orange NJ  15th Annual Novena to St. Joseph.  The Gospel for today is Luke 2: 41-51 (can be found here: http://usccb.org/bible/readings/031915.cfm)  Thanks as always for reading, sharing on twitter, facebook, reddit and elsewhere on social media.   I appreciate your feedback and comments.  Happy Feast of St. Joseph!  St. Joseph, pray for us! – Fr. Jim 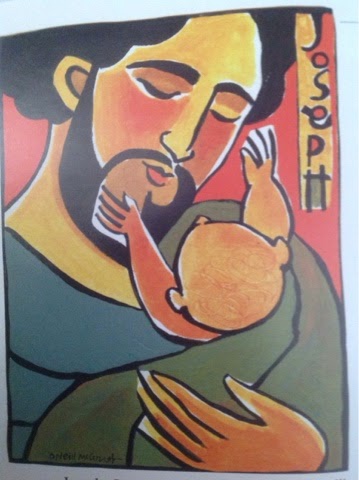 Anyway the point is, we don’t look to Saints as little gods. We don’t look to them to grant us wishes like genies where instead of rubbing a lamp, we faithfully do these specific prayers to get what we want.

We look to the Saints – we ask them to pray for us and to inspire us – because they give us excellent examples about loving Jesus, following Jesus and the effect and power that had in their lives and the lives of all those around them. Which is why I Love this gospel story about the entire Holy Family – Jesus, Mary and Joseph.

By now, hopefully we all know that Mary was chosen by God to give birth to Jesus and we know that Joseph was told by God through an angel it was okay to take Mary as his wife and to trust and believe what she was telling him. Now right there– for those things to happen like that, Mary and Joseph had to have been open to hearing God’s voice – and they had to trust, to believe and to follow that voice. That’s pretty characteristic of what makes a saint a saint.

But part of what makes them – Saints – important to us is the human dimension.
That relate-ability between us and them
We try to picture and relate to Mary as a Mother; Joseph as a Father.
We like to imagine them just as young people, young parents.

Here they were normal, everyday type of people, a carpenter and his wife who were called into beautiful, divine, heavenly things that were anything but normal. And in this Gospel, we get a glimpse that the normalcy of every day life didn’t go away just because they were God-loving, God-listening people. It wasn’t like because they were guardians of the Son of God that everything went okay… not by a long shot:

In this Gospel story – which is really the only one of his childhood – we hear of Jesus getting lost in the temple. Jesus was 12 years old. This had been an annual event to go to Jerusalem for the Passover feast. It had also been a long trip with a lot of people, family and friends all going together.

Often times, hearing this story, I’ve imagined it as Jesus kind of slipping out of his parent’s care. Not sure if I want to characterize Him as being disobedient for the moment… Maybe he was distracted, maybe he was inquisitive, maybe the experience of his heart burning as he sat in his Father’s house just consumed him so much he didn’t even realize everyone had left and he ends up just hanging back in the temple.
But there’s a different aspect that doesn’t often get a lot of attention when we hear this story: Joseph and Mary screwed up. They took their eyes off of Jesus. They were distracted. (That might be jarring to hear. People might want to just blame Joseph since Mary was conceived without sin thinking it couldn’t have been her fault… Just because she was without sin, didn’t mean she couldn’t make a mistake though… I’m not trying to shift the blame away from Joseph since it’s his feast day mind you and laying all the blame on Mary! That’s why I said – they both screwed up!)

Being Italian, I like to imagine them as Italian too (like a dialogue you’d hear on Everybody Loves Raymond…) Maybe Mary and Joseph were having a couples squabble “what is with your relatives? Next year, we’re not traveling to Jerusalem with that cousin of yours!” Maybe in all of the confusion they were preoccupied with trivial things – “did we pack everything? We’re going to be doing a lot of walking – are you sure you don’t want to get a new pair of sandals for the trip home?”

It’s hard for us to imagine that Mary and Joseph might have fixated on those minor details, those ordinary, every day matters – and in that they lost sight of the Savior. Lost sight of God’s son – their son. That they would lose sight of Jesus… even for a minute.

Yet we can relate to that – can’t we?

You and I know how easy it is for all of us to do the same.

We often talk about, think about, pray about how we want to be peaceful, joyful people – how we want healing from suffering – pains that affect our minds, body’s and spirits…yet when confronted by the reality that Christ is calling us to change and let go of a sinful habit; or that Jesus is probing our hearts to forgive that relative that we’ve been holding anger against; or when the Lord is nudging us to apologize to that friend, that neighbor, that co-worker and we just continue to resist doing so – we lose sight of Jesus.

Or – We often desire to know God’s love in a real, personal, intimate way – yet somehow we allow the busyness of life, the obligations and responsibilities to eclipse that desire; maybe we stop praying regularly or fell out of going to Mass on a weekly basis; maybe we are blind to the poor, the suffering around us – and all of a sudden, not thinking that we’ve made a conscious decision to do so, the reality is – we lose sight of Jesus. 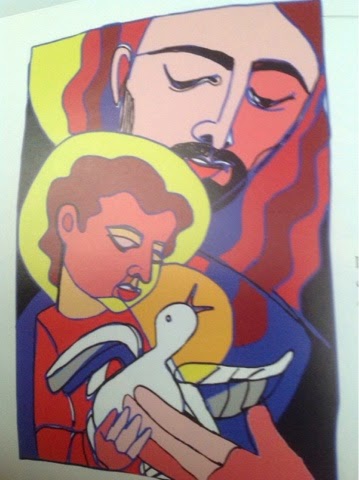 There’s a lot of ways we can relate to this experience in our lives, BUT – what Mary and Joseph, the first two who lost sight of Jesus teach us is that He can always be found.
When they realize what has happened they drop everything they had, they leave behind the crowd they were traveling with (even including people they loved) they turn around to go look for Jesus. To go search for Him. They panic as they spend three days looking. Each day having to become increasingly more anxious as they pondered Where is Jesus… Heartsick as they wonder would they ever find him? Perhaps feeling worried that they let God the Father down in losing His only son… They finally come upon him, sitting in the temple amidst the teachers as they would be discussing Jesus’ (and our) Heavenly Father.

Again we can appreciate the relate-ability of Mary and Joseph. The temple wasn’t the first place they imagined they’d find him, and upon discovering him, they let Jesus know how upset they were. “WHY HAVE YOU DONE THIS TO US? Your father and I have been looking for you with great anxiety” – this being the scriptures, I’m wondering if St. Luke cleaned that up a bit… But the boy Jesus speaks honest words speaking of who he is and what is most important most essential for him – “I must be in my Father’s house.”

As he returns to Nazareth with his parent’s Joseph and Mary, he doesn’t leave his Father’s house. The union between God the Father and His Son will never be broken. But now Jesus’ earthly family, this Holy Family is included in the Father’s house as he goes back to Nazareth and was obedient to them.

For us, I truly believe our devotion to St. Joseph only makes sense if we focus our attention, on that question that he and Mary must have asked each other: Where is Jesus?

Where is Jesus in our lives?

Where is Jesus in our work, our routines?

Where is Jesus in our families; in our relationships?

Has he been relegated to a minor place – someone we forget about in the ins and outs, the daily stresses, responsibilities, confusions?

Have we lost sight of him?

If we have, whether it was momentarily or much longer than that… Joseph and Mary offer us their life witness and testimony that the only way we can achieve the peace the fulfillment and love we long for is if we drop everything, even leave the crowds we are traveling with and go search for him. But here’s where we are more fortunate than Mary and Joseph – unlike them, for us, Jesus can be easily found. We hear his voice in the Scriptures, we encounter him in the Sacraments -especially in the Eucharist where he offers us His Body and Blood, and in Reconciliation where our sins our wiped away and our friendship with Him is renewed…

We don’t encounter Jesus as a 12 year lost in the temple – rather, we are blessed to know that Jesus Christ, risen from the dead is in fact constantly on the look out for us, longing for us to long for him… Hoping that our desire is that what consumed His child-like heart and caused heart-burn for Mary and Joseph – to be in the Father’s house for all eternity. For you and I, that is only achievable if we never lose sight of Jesus