Latest News
Home /Blog/WHAT HAVE I GOTTEN MYSELF INTO?

Hi everyone, here’s my homily for the SECOND SUNDAY OF LENT – March 1, 2015.  The readings for today can be found at http://usccb.org/bible/readings/030115.cfm.  Thanks as always for stopping by to read, comment and sharing this post on Twitter, Facebook and reddit.  Appreciate your support and interest.  God Bless – Fr. Jim 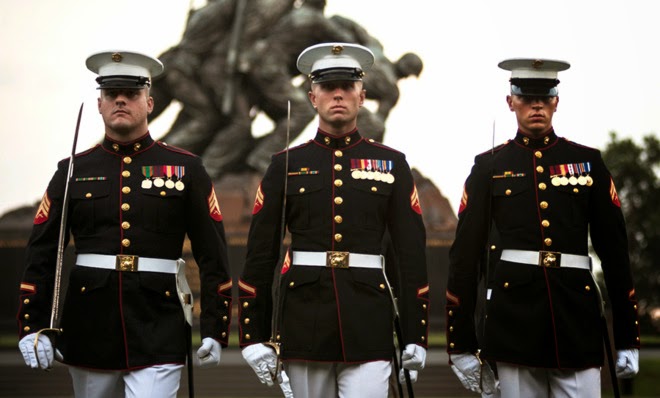 One of my best friends growing up was this guy who lived down the street from me named Kevin. We were in Little League together – we got in trouble (actually, lots of trouble) together – and on the other extreme, we were altar boys together (and come to think of it, sometimes got in trouble there too). One of the things Kevin liked to do was to play “War.” That’s where we’d be building forts in the woods, waiting to attack our enemy – (who was usually some unsuspecting neighbor of ours who happened to be walking by). Looking back, I can see how that was one of many signs that Kevin wanted to be a United States Marine. Another sign would be how every Halloween he would dress in fatigues and camo paint his face – not because he couldn’t afford a costume, but because that’s all he wanted to dress up as – he wanted to be a Marine.

In High school, this quest continued for him – he joined a High School ROTC program – and was really into it. His folks weren’t as excited about it though. During his sophomore year they decided to move down to Virginia – for a lot of reasons – but I think one of the reasons was that they had hoped a different environment, away from some of Kevin’s “military buddies” (not me…) might help shake some of this desire out of him.

It didn’t work. In fact, not long after he graduated, without talking to his parents, he went to the Recruitment office one day, and enlisted. He called me to tell me that he would be leaving for Parris Island for Boot Camp in a few weeks. I wasn’t surprised – and was happy for him – even as his mother continued to cry in the background… Happy because he was fulfilling his dream.

It wasn’t until about 6 or 8 weeks later that I got my one and only letter from Kevin writing to me from Boot Camp. I still have the letter somewhere. In it, he talked about how awful, how much he hated it – Hated boot camp – the lack of sleep, the hours of repetitious mundane tasks, the yelling of the D.I.’s. It sounded like his dream had become a nightmare. He sounded sad, even a bit scared in his letter as he wrote the words “Jim, I keep asking myself ‘What have I gotten myself into…’”

What have I gotten myself into. 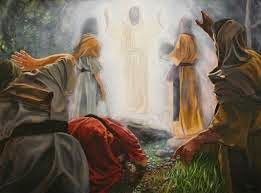 I kind of think that’s what Peter, James and John felt and thought in today’s Gospel. Look at what happens in the passage we heard today. They’ve been following Jesus for some time now. They had a concept in their minds of who Jesus was. Here Jesus takes the three of them up this high mountain by themselves. He’s “transfigured” before them – his face shines like the sun, his clothes become whiter than anything Tide or any other bleach could hope to make them. Moses and Elijah, two major figures who had been dead for centuries appear. Moses was the personification of “The Law” (remember Moses was given the 10 commandments to give to the People Israel) and Elijah represents “The Prophets” (the messengers of God to His people). So they see these two men speaking with Jesus and they take a step back – as the Voice of God the Father is heard “This is my beloved Son. Listen to Him.” It’s clear – Jesus is now taking their place – fulfilling the roles they had held. The three go from excitement at first “Let’s build tents and never leave!” to being so scared – the Gospel says they were “terrified” so much so Jesus “hardly knew what to say.” I wonder if they were thinking:

“What have I gotten myself into.”

Because this changes everything for them. They had been with Jesus for a while now. They had heard him preach; they saw and experienced some of his miracles and healings; they had responded to his invitation to leave everything behind and to come and follow Him. But now as they were on this Mount, as they heard the voice of God, any semblance of a doubt about who Jesus is was gone. They knew who he was “THIS IS MY BELOVED SON, LISTEN TO HIM.” There’s no wiggle room around that. Jesus isn’t some flash in a pan. Jesus isn’t some guy that they’re just going to get bored with one day and move on from. Jesus is God’s Beloved son.

Why would that be something to scare the three of them? As the Gospel says after all these sights, and sounds and feelings they are left with Jesus alone. It was cool up until now to hang with Jesus, to hear him preach some great words – do some impressive things – but, now they realized that was only the beginning of their relationship with Him. This would change their lives even more than following him to this point had done. What was going to happen next? As they are leaving he’s warning them of his own Passion and Death… There’s scary things on the horizon. What have I gotten myself into?

Is it different for us? We come to Church and (hopefully) it feels good – we’re happy to be here. It’s good that we like being apart of this community; it’s a good thing to want to get involved in things – but all of that is not enough. We hear God’s voice saying to each of us “This is my beloved Son – Listen to Him” things change. Because that puts a path out for all of us. It’s only in submitting our will to God’s will – letting go of the things that block God, enduring the difficulties of doing all of that and truly focusing on Jesus that God can transfigure us – God can transforms us into the beautiful beings he had in his heart and mind from the very beginning. Because that’s the other part: When we listen and follow Jesus – God looks at each of us and says we are His Beloved Sons and Daughters too.

My friend Kevin, ultimately got through boot camp, graduated from Parris Island, and became the Marine he had always dreamed he would become. Seeing him on his Graduation day, after that experience, I never brought up that letter he wrote – never asked how he got through his “what have I gotten myself into” moment (Marine’s aren’t known for wanting to probe their “feelings”) Just seeing him, I could tell he had gotten through it, and was a stronger Man, a stronger Marine for it.

For the three apostles, we hear that Jesus came to them in that moment of fear, he remains with them and leads them with him down the mountain. And they keep following Him. They would mess up, many, many times- and every time, Jesus would draw them closer to himself in forgiving them over and over. And after Jesus had ascended and gifted them with the Holy Spirit at Pentecost – they would continue to spread His word to the world around them in ways they could never have imagined they’d be able to that day they first did this Mountain climb with Jesus.

What about us? Have you found yourself in the spot where you are asking yourself, “What did I get myself into?” When you first entered this college and was getting into the routine, did you feel that way? Jesus has called you to be here and you answered the call. As you know, that doesn’t mean a smooth ride. It means you are being obedient to Him because you love Him.

As we come here to hear His Word and receive His Body and Blood – are we just telling Him things – are we asking for things – or are we Listening to him? What is he saying to you in your heart of hearts? God always has us on a path of change because He will not leave us as we are now. He has a better plan. What is he asking you to change? What difficult thing, what sin, what temptation seems to be holding you back from a deeper relationship with Him? Your relationship with Him is of the utmost importance. Nothing else measures up to that. Is God calling you to go somewhere that makes you feel uncomfortable? More than likely, we are a bit scared thinking about those things and we may wonder to ourselves “what have I gotten myself into?” God the Father’s voice confidently reminds us “This is my beloved son. Listen to Him.”

What do you believe about listening and obeying what Jesus tells you? In your soul, the Holy Spirit confirms what it is you need to do. Following that voice will enable you to stand strong on your faith. Becoming fearless in Jesus is the goal for you. There is true freedom in walking boldly to His throne and journeying in confidence knowing He directs your path. Basically, Jesus knows what you have gotten yourself into and He is standing close helping you through. He will never leave you.