Hi everyone – here’s my homily for ASH WEDNESDAY – February 18, 2015.  Thanks as always for reading; sharing it on facebook, twitter, reddit and other social-media sites; and all your feedbacks and comments.  Have a Blessed Lent!  Fr Jim 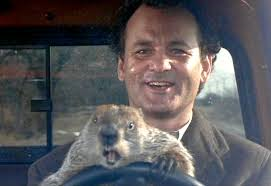 A few years back, a group of about 75 members from Newman Catholic here at MSU and I were on a bus to Orlando Florida for a FOCUS conference over Christmas break. I underestimated how rough 24 hours on a bus was going to be – even with the luxury of having TV’s with DVD players. You would think that would make the ride more bearable. But then one of our members insisted – and because he was an Eboard Officer demanded – that we watch “Transformers II.”  Which was one of the stupidest things I’ve ever seen (this “fan” argued that’s because I had missed the first Transformers. After patiently (or as patiently as I can) watching that thing, I claimed the right to pick the next flick. Which was one of my favorite films of all-time. Groundhog Day.

I hated that when I looked it up, I realized that came out in 1993 – some of you weren’t even born yet (another thing I hated realizing) In the 21 years since it’s initial release, the film has grown in critics estimation with it landing on a bunch of different lists ranking the best American Films of all time.

It stars comedian Bill Murray who plays this arrogant, condescending, self-centered weatherman named Phil Connors… who is sent to Punxsutawney Pennsylvania to cover the annual Groundhog Day festivities.  He grudgingly files his report about the groundhog seeing his shadow and predicting 6 more weeks of snow (such a bizarre legend), the crew packs up their gear into the van, and they attempt to leave.  But a blizzard hits, which forces them to stay an additional night.

When Phil wakes up the next morning right away he recognizes something’s “off.”  The same exact song comes on the clock radio (“I got you babe”) he encounters the same people at the exact same spots that he had the day earlier having the same chit-chat conversations.  He soon realizes that he’s reliving the exact same day – Groundhog day – and he’s the only person in the whole world that realizes he’s stuck in this time loop. 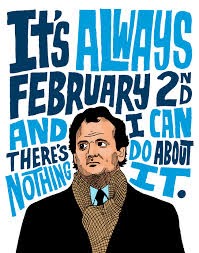 The first time it happens he kind of brushes it off as maybe he must be dreaming and is kind of in disbelief. But when it happens a second time, and a third time – he begins to realize he is trapped in Groundhog Day.  Life just keeps repeating itself over and over and over again with everything being exactly the same as it was the last time.

He goes through an emotional roller-coaster.  One day he just binges eating and drinking whatever he wants.  Another day he realizes that he’s learning people’s secrets – so he’ll go up to a woman he’s attracted too and ask her a bunch of questions so that he can immediately sweep her off her feet the next “Groundhog Day” and she has no idea how he seems to know everything about her.   He’ll move to despair and anger and hopelessness as the day repeats over and over again as he’s imprisoned in the endless Groundhog Day.

Only in time, after suffering through the repetition: dealing with his own self-absorption which continues to get in the way of him changing — slowly,  he drops his defenses. He begins to use his knowledge of how the day will unfold to help people.   For example, knowing that a child will always fall from a tree at a certain time, he makes it a point to be there and catch the child every time. Knowing that a man will choke on his meal, he is always at a nearby table in the restaurant to save him.  When Phil ultimately goes about the difficult work of changing himself:  becoming a sensitive, caring individual- that ultimately this “spell” trapping him in the loop of Ground Hog Days finally ends and he makes it to February 3rd.

I couldn’t help but think about that movie (maybe the weather has something to do with it) and what we’re celebrating here today.  If we’re not careful, Ash Wednesday and this season of Lent can become “Groundhog Day” for all of us – we can find ourselves in a similar “loop” – simply repeating the same thing over and over again – coming together for this ritual of putting ashes on our heads; hearing the same scripture readings we did last year; following these lenten practices of giving something up, refraining from eating meat today and on Fridays. Some people even look forward to giving up the same things each year – “Off Facebook for 40 days” – giving up deserts and making this almost like the Lenten Diet to drop a few pounds in time for Easter – which aren’t bad things. But Lent is more than an opportunity to lose some weight or give ourselves a well-needed “virtual” time out.

In the first reading, the Jewish prophet Joel proclaimed to us - Even now, says the LORD, return to me with your whole heart, with fasting, and weeping, and mourning; Rend your hearts, not your garments, and return to the LORD, your God.   St. Paul pleads with us in the Second Reading:  Brothers and sisters… we implore you on behalf of Christ, be reconciled with God… NOW is an acceptable time… NOW is the day of salvation.

Even though these words are thousands of years old.
Even if they’ve kind of flown over our heads in years past and we’ve kind of mindlessly made our way through Ash Wednesday and Lent in previous years, Jesus meets us here and now – in the present.  We’re not to buy into that lie that it’s the same old thing, every year.

Something drew you here today.
In some way, the Holy Spirit touched each of our hearts to break from our busy, busy lives to be here.  These ashes are meant to remind us that without God’s breath of life, this is all we would be, a pile of ashes.  It’s His amazing, lavish, mysterious love that we even exist.  And everyone of us – from me as your priest to everyone gathered here – in receiving these ashes, we recognize that we don’t always live our life with a reciprocal love.  In fact, we may have eclipsed God from our daily lives at times.  Perhaps that’s become a pattern, a routine in your life as well.

As the ashes are put on our head we’re called to Turn away from Sin and be faithful to the Gospel.  And even though we’ve heard them over and over; year after year.  They invite us to recognize that we don’t have to keep doing that same thing.   We can take this opportunity to really change, to begin a new.

+ Maybe this Lent I’ll finally go to confession, because it’s been a really long time.

+ Maybe this Lent I’m going to start getting back into the habit of going to Mass every Sunday.

+ Maybe this Lent I’m going to join a bible study or participate in some community service to help others.

+ Maybe this Lent, I’m going to reach out to someone I’ve been angry with or haven’t resolved a fight I’ve had with.

It’s up to us to make sure Ash Wednesday doesn’t become like “Groundhog Day” – an annual, recurring, loop. What is the something new, something different that Jesus Christ is calling you to today?   How does he want you to come to meet Him and Know Him in a new way.  Pope Francis in his Lenten Message very beautifully said:

God does not ask of us anything that he himself has not first given us. ‘We love because he first has loved us.’He is not aloof from us. Each one of us has a place in his heart.
He knows us by name,
He cares for us and he seeks us out whenever we turn away from him.
He is interested in each of us;
His love does not allow him to be indifferent to what happens to us.
Think how mind blowing that is… God – He is interested in us. He is not indifferent to us. In a particular, specific and individual way Jesus is inviting you and I to go deeper within ourselves and make the next 6 weeks a time to break our destructive patterns.

To be reconciled to God and one another.
To Free ourselves of being trapped with self-focused thoughts and truly live as the liberated sons and daughters of God He calls us to be. What would that mean for you? Would you, like Bill Murray’s character Phil, do something different – become someone different?  Would you draw closer to Jesus Christ who is already close and waiting for us?

Let us turn towards Him, with love.
Let us wake up from our recurring nightmare, from the sameness of our sins, and ask the Author of originality what wonderful thing, what amazing person we can become, through His grace.  While Lent may be a time to deny ourselves the little luxuries, the ‘extras’ that crowd our life and consume our time, Lent is also a time to indulge in one-on-one time with the Lord, with peaceful meditation, with talking to Him, openly and honestly, about who we are and who we yet might become, once transformed through His love.

Today is Ash Wednesday…. I can promise you, the calendar will not stop – it will be followed by the 40 days of Lent, the Easter Season, then Ordinary Time and Christmas and another Ash Wednesday… another Lent.  May this one always stand out in your memories as the one where you – where I – finally let go of our fears and self-doubt, our worries about tomorrow and tomorrow and the tomorrow after that. May we truly hear St. Paul’s words “NOW is a very acceptable time… NOW is the day of Salvation…” and trust that Jesus and His love will always be with us, always be enough for us, more than enough.  Trust that no matter what tomorrow may bring, His love can change us, can make us new, will make us His.