Hi everyone – here’s my homily for February 1, 2015 – Fourth Sunday in Ordinary Time. The readings for today’s Mass can be found at http://usccb.org/bible/readings/020115.cfm Thanks as always for reading, sharing and your feedback. Have a great week – Fr. Jim 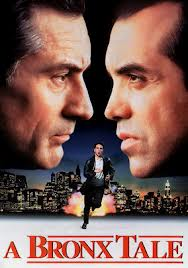 How many of you have heard of the movie “A Bronx Tale?”

It’s a bit of an older film being released back in 1993 and I’m not sure if it ranks as a “Classic” film to anyone other than Italian Americans like myself. It starred Robert De Niro and a man by the name of Chazz Palminteri. A couple of years ago, when I was on Lino Rulli’s “Catholic Guy Show” he had Mr Palminteri in as a guest. He was coming to talk about a new film he was in that was opening soon. But Lino, was really huge fan of “A Bronx Tale.” He had seen it numerous times (to the point of having lines and scenes memorized), so he really was more excited to have the opportunity to talk about “A Bronx Tale.” Funny – I don’t even know what the new film it was Mr Palminteri was promoting. (Not sure if Mr Palminteri would think so)

Because most actors promoting a new film wouldn’t be too eager to talk about a film they made 16 years earlier. But in all honesty, Palminteri lit up as he talked about “A Bronx Tale.” Probably because, (which I didn’t realize until that interview) Palminteri wrote “A Bronx Tale.” Most if it is based on his own life. The story is of a kid growing up in the 1960’s with, basically, two father figures – his natural father and a mob boss – each competing for the opportunity to impact the kid’s growth and development. Before it was a film, “A Bronx Tale” was a play, which was also written by Palminteri. In the interview, he said that he was offered great deals by different film studios for the rights to the play – but he refused all of them and went with a less lucrative deal because he wanted to write the screenplay and play one of the main characters.

Just hearing that you might think “here’s another actor with a huge ego,” but as he talked, you could tell that wasn’t it. That became most evident as Palminteri discussed one of the most famous quotes from the movie. In one of the most dramatic scenes (which I won’t spoil for you), the Father is almost trying to impart to his son these words – The saddest thing in life is wasted talent. Palminteri movingly recalled how his own father had written those words on a piece of paper and had taped it on his mirror when he was growing up, so he would see them every day and never forget them. Now that he’s a father himself, he tries to impress those same words on his kids’ hearts and minds. If you’ve ever seen the film, you can see that, in many ways, those words inspired Palminteri to write the play and the film 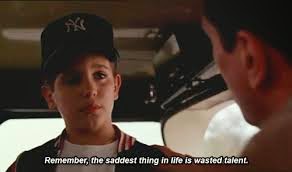 It became obvious that Mr. Palminteri is so protective of this story because the words mean something to him. They are important words. They are words passed down from one who loved him to ones he now loves. These aren’t merely lines an actor needed to memorize; they came from his heart and soul. And just hearing him say that line live in studio, you could hear that reality.

Think about it – when someone speaks words that mean something – that are genuine, that are sincere, that come from a person’s heart and soul – you can tell. You get a sense of their authenticity. We probably can think of a number of illustrations of that reality. For example, people say, “I love you” all the time – but you can tell the difference between a celebrity saying those words to their fans on Oscar night, and a Mother and Father saying those same words to their child.

Of the four Gospels, the Gospel of Mark is the shortest. Not because Mark doesn’t have a lot to say – but because he focuses so precisely on some very memorable aspects of Jesus’ character.

Three weeks ago, we heard Jesus ask, “What do you want?” Last week, Jesus inaugurated God’s Kingdom by saying, This is the time of fulfillment – The Reign of God is at Hand – Repent – Believe the good News. In today’s Gospel, what’s astonishing to the people isn’t so much the words Jesus speaks but how Jesus speaks, how he teaches. He’s not just a man reading the words of the prophets who went before him. He’s not someone who is simply delivering a message. He is in fact the message… The Gospel describes the crowd as being amazed that He’s teaching as one who has authority. These holy words – these divine encounters of the scriptures that Jesus draws upon as he teaches, take on a deeper meaning coming from him. Why?

Because they are His story. They are His words. They originated from Him. And so Jesus speaks with the genuineness, sincerity, and understanding of one who has authority.

His authority is so evident – so effective – so obvious, that even his enemy – the one who wishes to defeat and destroy Jesus (Satan) obeys his word. We heard in that Gospel passage how a demon had basically captured a man’s soul – tormenting him – enslaving him; and yet, with one rebuke from Jesus, the demon comes out of the man who is instantly healed and restored.

As Christians, each one of us is granted authority by God to speak in his name. We are called by Jesus to go out and to preach and teach and heal. To care for others and to show them God’s love. That’s not accomplished simply in repeating or memorizing scripture passages like we’re reciting a spell or something. That only becomes possible when His words become our words. When they come from our hearts and souls. When we realize these are words that were passed down by one who Loves us – who wants us to love one another as well.

Jesus entrusts us with His words and His story. We have the power, the authority, the duty to make Jesus’ name, his Presence, his activity alive today. How deeply that takes root today depends on how serious we take this call. He in fact has gifted us with the ability, the means, the opportunities to do just that. Our Lord has great expectations of us. Jesus might borrow Palminteri’s line and agree that the saddest thing in life – for us, for those around us waiting to come to know and love Jesus – would be our wasting our talent – and missing this opportunity…