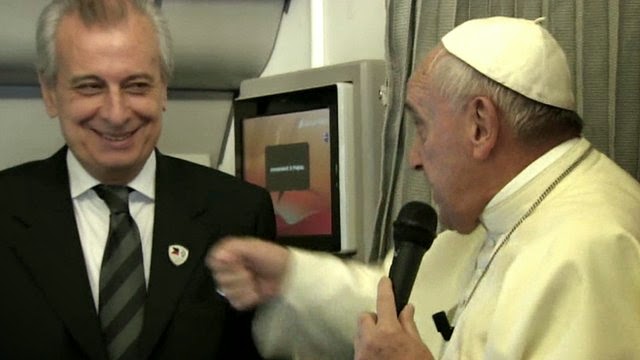 One of my favorite weekly (daily?) activities is been fielding questions about something Pope Francis has said or done.  It usually starts with a shocked “Did you hear what the Pope said…”?  I usually refrain from responding by asking “do you mean – did you hear what this reporter/news agency/ blogger with some agenda has said the Pope has said?”

One of the recent examples was a press conference the Holy Father had on his flight to the Philippines.  When he was asked about the Islamic-terrorist attack on the editorial board of the french satirical magazine Charlie Hebdo last week where 12 people were killed by these lunatics, he said (according to the Associated Press):

The headlines were all over the place -including one that said “Pope in favor of limiting free speech.”

I tried responding to a few people via twitter and facebook explaining a few things, and then found that 140 characters won’t do…So here goes:

1 – No – the Pope isn’t expressing his desire to see the legal restrictions to freedom of speech – he’s expressing a very Catholic understanding of Freedom. To some of my friends on the more conservative side — do you remember what Saint Pope John Paul II said about freedom? I’ll never forget it because he said it here in the Archdiocese of Newark at our Cathedral Basilica when he celebrated Evening Prayer with us on October 4, 1995 (my first semester in the seminary). He said “Freedom consists not in doing what we like, but in having the right to do what we ought”

Pope Francis is trying to make a similar point. For a Catholic, we need to responsibly use the freedom we’re entrusted with – not to incite, not to provoke especially for the sake of provoking.

2 – No the Pope isn’t advocating violence by saying he’d punch this guy out — talk about people not having a sense of humor. Lighten up. He was making a joke to make a point. (And if you don’t think that’s appropriate, then you probably have a problem with Jesus (check out Matthew 5:29 – if you’re right eye causes you to sin…) His point was pretty straightforward – people’s faith, people’s religious belief are things that are very personal, very intimate, very important to them. You can’t simply mock them and expect people not to passionately react to them.

3 – No the Pope isn’t blaming the victims of the terrorist attack on Charlie Hebdo’s offices for that atrocity.   From the day it happened, the Pope condemned this most recent example of barbarism. He was responding to questions from the press that were talking in a casual manner about a lot of different things. When this topic came up, he was speaking casually – as he likes to do. Which comes to my next point…

4 – Stop simply reading the different reports, “tweets” or provocative headlines that are being highlighted by certain people/media sources. You can go to NEWS.VA (the vatican website) download “The Pope App” and get access to everything that the Pope is saying direct from the Vatican – which will usually correct some of these misreports.

Seriously, Pope Francis has said a lot more “controversial” things the last couple of days (at least I would think they would be considered such by some in the media) that hasn’t even been mentioned as this manufactured controversy continues.

5 – Pope Francis is, as my friend Lino Rulli would put it, “pope-ing” in a great way. No matter where you fall politically, religiously, etc – he’s going to provoke you to think and open your mind and heart to think about important things in a different way. He’s talking a lot about the environment and care for the environment. Does that mean that he signs on with the Democrats in vetoing the Keystone pipeline? NO – Does that mean we have to stop looking at the environmental issue in purely political terms and those on the other side of that issue might want to ask how is our stewardship of the earth saying something about our love of God and His creation? that would be a massive YES.

All of that aside, a final personal thought to the title of this piece – Did Pope Francis just say “JE NE SUIS PAS CHARLIE HEBDO” – No he didn’t… but I am.

I mourn the innocent people who were killed that day… I hate what was done to those individuals who were simply at work when these mad men felt justified to silence them forever… I hate the terror (remembering how frightening it was here on 9/11/01 and thereafter) that was instilled in another global city hearing gun shots in the daylight as these monsters calmly and coolly killed their targets and anyone who got in their way…As they shed more blood in a Jewish supermarket a few days later.

But I can’t say “Je Suis Charlie Hebdo” – and it’s important to point that out and note that distinction.    Anyone who takes a quick look at Charlie Hebdo would recognize the contributors, etc – they are blasphemous to people of all faiths. There are some atrocious things this magazine has done towards Catholicism that I find absolutely repugnant.   Is that protected by “freedom of speech” – yes – and because as an American, I know the importance of protecting free speech (which sadly, for example, means that pornography is able to spread with reckless regard to what that is doing to our society).  But as a Catholic, that’s why I appreciated the Pope’s words…  Catholics, Christians, people of all faiths, need to recognize their responsibility to God for the gift of life and the freedoms we enjoy — coming from Him, as the Declaration of Independence, one of our founding documents so eloquently states – and which we sometimes forget — the freedoms come from God, not from any government…

Not sure if I just hit over a hornets nest, but, I still live in hope that we can have thoughtful debate and even more thoughtful personal reflections on these things.