Hi everyone, here is my homily for the SECOND SUNDAY OF ADVENT – December 7, 2014. The readings for today can be found at http://usccb.org/bible/readings/120714.cfm . Thanks as always for reading this blog, for your sharing it throughout social media and all your comments and feedback. It’s much appreciated. God Bless, Fr Jim.

Between friends posts on Facebook; overhearing random conversations and just a quick glance around town you get the sense that a lot of people are working overtime in preparation for “the Holiday’s.” That’s not my attempting to be PC and not say “Christmas” here – but rather to cover everything from Thanksgiving through New Years with some made-up things like “Festivus”; office party’s, Friends-givings; and so on. It’s a celebratory time of year which means a lot of different things to a lot of different people.

The thing that hit me though with all of this celebratory stuff going on is how – no matter what people believe or think – a common bond that everyone seems to be sharing right now is we’re busy preparing. Very busy preparing for these annual celebrations. Just look at that beautiful tree in Rockefeller Center that was just lit up this week – there’s been crews of people working full-time, non stop for weeks on that – just to cut the tree, transport it to New York, get it up, put scaffolding around it to put miles upon miles of lights on it… that took the work and effort of a small army of people.

Far less visible to the entire world than that tree – and we can attest to how many of us are doing the same things in our own homes, offices, dorm rooms. A friend shared before and after pictures of her house online that chronicled how she had spent the days after Thanksgiving decorating with the update “three-days of non-stop decorating and I’m finally done!” I saw this other house that did a “Frozen” theme light show that I can’t imagine how many days, weeks took to put together.

Objectively speaking, when we look at it, all of it is quite impressive. Whether people or communities are going with the non-holiday-specific white snowflakes on lamposts or places that have nativity scenes complete with live animals roaming around – in a lot of ways, it’s beautiful. We see how people put forth so much work, so much creativity, so much effort to turn this environment of ours – which at this time of year, with the leaves from the trees gone, the weather making a dramatic turn which has made everything feel and look a bit barren, a bit cold, a bit deserted – to see all of that transformed to make it feel alive, colorful, joy-filled even. For those who’ve done that work, you know how much preparation goes into each of those things.

The thing for us as Christians, we have mixed feelings about “Christmas being co-opted.” I must admit that the so-called “War on Christmas” has angered me in past years, and at times, still does, especially when it seems some people go out of their way to attempt to remove any connection to the religious aspect of the season or feign they’ve been hurt or slighted by any reference to it being Jesus Christ’s birthday that we’re celebrating… that’s called being extreme.

But on the other hand, I know that when I get sucked into those debates, those arguments, I can get drawn into the other extreme… where I lose sight of the signs, the sights of the season. Do I really want to argue whether that store that has a “Happy Holiday’s” sign up because they hate Christians? or if that other guy who doesn’t even believe in God has “Merry Christmas” hanging in his store window is just doing that because he wants my Christian money (which has as much value as atheist dollars and cents). We can get distracted, wrapped up in so much of that stuff… and can come here to look to rally together for this fight in this so-called War on Christmas for our side.

But I really don’t think that’s what the season of Advent is about.

Maybe we can look at all of this from a different perspective this year. Because all of the physical efforts we’ve seen to make our winter wonderlands, Santa villages, even Frozen -theme light shows so elaborate is really a modern metaphor to some of what we just heard in the readings.  check out this house if you want to see the epitome of elaborate!

We just heard the beginning of the Gospel of Mark proclaimed, which tells us that John the Baptist was fulfilling the role of Isaiah the prophet from the Old Testament. John is speaking to the world as the voice of one crying out “Prepare the way of the Lord, make straight his paths.” That ties the Gospel to the words from the prophet himself that we heard in the first reading. If you missed them, they are words of tremendous expectations: A voice cries out – In the desert – prepare the way of the Lord – make straight in the wasteland a highway for our God! Every valley shall be filled in, every mountain and hill shall be made low… and so on.

Again, it took weeks (months even?) and a small army of people to bring one tree to Rockefeller Center, can you imagine what type of effort, time, resources it would take to fill in a valley, to level a mountain? You see in, our day and age, thousands of years since those words of Isaiah were first uttered – we can drive to the George Washington Bridge and see how excavation crews can cut through a mountain to build a highway for cars – we might not realize that’s no easy task to accomplish. These types of things take a lot of time, a lot of effort, a lot of energy and resources to accomplish.

All of those poetic images are meant to point out for each of us the difficult, the extensive, the time-consuming, all encompassing efforts it takes spiritually for us to prepare a place for Christ to enter in. We can sometimes fall into the trap of thinking that just getting here to Mass has us covered. But that would be like those of us who going into New York looking at the tree and say “how beautiful” as we stare at it for five minutes, take a few pictures and then go sight-seeing and shopping– having no idea the effort to put that up – or if some friend walked into your elaborately decorated home and simply saying “Oh that’s nice” as if they looked at some store bought plant that you have on a table.

We can’t simply be in the presence of the Lord and think we’ve got it, we’ve done the work to welcome Him in ourselves. When someone comes to the door, it’s easy to leave them out on the porch talking through the screendoor. But if you ask them inside, you are taking more of a risk in being vulnerable. That is not a bad thing, especially when it’s Jesus Christ who is at our doors. Don’t leave Him on the porch. Invite Him in and make room for Him in your life.

That takes real personal preparation on our parts to prepare the way of the Lord. To make straight in the wasteland a highway for our God – to invite Him in from the porch. I am recognizing my need for God, my absolute dependence on Him – that I need and want Him to come, to come into my world, come into my life. I need Him and so do you. We can’t fool ourselves that we don’t … if we do, we will fall short.

There are valleys that need to be filled in each of our lives – valleys of selfishness, of self-centeredness that have led to an arrogance, a false belief I can do things on my own, where I forget my need for God in my life. There are mountains and hills need to be leveled in each of our lives – – Obstacles preventing God that seem insurmountable for Him to truly entering my life and yours.  He has seen it all:  the mountains of sin, addiction, struggles those things which allows the devil to repeat lie after lie to the point that we can start to believe those lies and forget that God loves me so much. Have we forgotten that? He wants so much for me and you to be His sons and Daughters. He loves us so much that He sent His son Jesus to come to us, and desires Him to make a home not simply among us- but within us…. 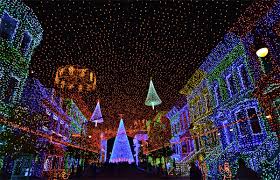 This is the hard work of the season of Advent, to prepare the way of the Lord, to welcome Him anew. And if we allow it, we can let the beauty of the “holiday season” constantly make us aware of the Advent Season – a time of waiting and preparing our hearts. Pope Benedict XVI a few years ago put it like this: “Let us remember… as we look at the streets and squares of the cities decorated with dazzling lights, that these lights refer us to another light, invisible to the eyes but not to the heart.”

If we keep that advent focus – to be aware of, attentive to that light – of Christ…

If we become aware of how perhaps that light has dimmed in our own hearts, we can engage in the difficult preparations, the hard work of straightening, filling and leveling that needs to take place in us for the light to be brightened and glow in our lives…

Then the true meaning of the season will be recaptured, not in a “war” being won, but in the lived witness and testimony we offer. As we prepare to commemorate the first coming of God in the special package of a little baby at that first Christmas, May you and I encounter Jesus Christ here and now, prepare to welcome him anew and experience the empowerment of God’s Holy Light in the houses of our own hearts.