FHi everyone, here’s my homily for SUNDAY OCT 19, 2014 – the 29th Sunday in Ordinary Time.  The readings for today’s Mass can be found at http://usccb.org/bible/readings/101914.cfm.  Thanks as always for reading, sharing and commenting on this blog.  God Bless – Fr. Jim

The closest I ever was to skipping school or intentionally late was under the great assistance of my two older brothers. I had to have been in 7th Grade, My brother Craig was in 9th grade and oldest brother Chris was a senior in High School. It was a February morning… it was the day after a snow storm had kept us home all day and it was a Wednesday.

I remembered that because it wasn’t just any Wednesday – it was Ash Wednesday. My mother had looked at the Church Bulletin and noticed that there was a 8:00 Mass in the morning. She raced us out the door at 7:45 so that we could get to St. Agnes in time for the 8:00 Mass (the Church wasn’t even a 5 minute car ride from our home) And she gave us each a note for being late (Since Home Room was 8:20, we were going to be a few minutes late – maybe miss a few minutes of first period since she told us to leave Mass after communion – something I DO NOT ENCOURAGE)

It’s amazing how quickly with my oldest brother driving, and the three of us not in any hurry to get to school, that other options came to mind. It’s like Ferris Bueller’s Day off, Catholic Version…

Truth be told, and not to make my brothers look badly, but they weren’t exactly interested in going to Mass at all. So when my brother decided to take the long route to St. Agnes (“OOPS did I just miss the turn onto Madison Hill Road???? Oh well, I guess I’ll have to go down Westfield Avenue! So now a 1 mile trip added another 3.5 miles, in morning rush hour, with streets in bad condition. Sadly we were already late for 8:00 Mass. It probably was 8:25 by that point. That’s when I, very helpfully, offered that there was also a 9:00 Mass that we could attend. In fact that was the school Mass, with Music and everything – so my brother kept driving the same 3 mile loop. We got into church just in time for the 9 am Mass. It went to around 9:45… By the time we had our post-communion meditation, lit a candle at one of the shrines (at which point an older parishioner came over and said “don’t you guys think you better be heading to school?”) it was 10 am. We easily missed the first two periods of the day (I was hoping to miss part of the third period which was Math) We told ourselves that we were good Catholics – had to get to Mass for Ash Wednesday right? And we completely got away with it. Ashened headed with notes from Mom there was no questions asked when I got to school (I skipped going along with my brothers who decided they had to go to the Diner after Mass… even though Chris made a compelling argument that breakfast is the most important meal of the day…forgetting of course that since it was Ash Wednesday we were supposed to fast, but…) 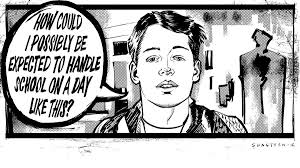 In the grand scheme of things, I know it’s not the most earth-shattering act of disobedience that one could commit. Sadly, I can give countless examples that were even worse that my brothers and I did. But there’s something about this one that always bothered me – still bothers me to this day. Sure I regret our being dishonest to my parents, teachers and all. But the thing that really makes this stand out is the fact that we used God, and for such a silly reason – just so we could be late for school.

The idea of “using God” isn’t something that the Chern boy’s invented. Not by a long shot. In fact that’s one of the things that is at play in this Gospel. The pivotal question in this encounter “is it lawful to pay the census tax to Caesar or not?” was simply designed to stir up opposition against Jesus. The Pharisses thought they finally got him – see- If Jesus said not to pay the tax to Caesar then the Roman officials could take Jesus out labeling him a radical revolutionary who threatened civil disobedience, who was challenging their authority. If Jesus said they should pay the tax, then the Jews of that day would have people arguing that he was siding with the Romans, the very people that had taken over their land.

Even more, if Jesus gave some support to the idea of taxes, state, Roman authority – for many, that was seen as violating the commandment to love, to serve, to obey God alone. Not quite a popular view to most Jews. So Jesus’ opponents are trying to be clever. They try to use God and their covenant with Him – not just to get out of paying taxes but even worse as a means of trying to eliminate Jesus, the Son of God simply so they could continue what they wanted – to maintain their positions of power and influence.

Interestingly though, if you look at the entire episode, we see Jesus isn’t simply delivering a clever dig at his opponents (he is) But in the process Jesus tries to move them from asking about loopholes, responsibilities, obligations and says – well since you asked – since you brought the question of God up, What do we owe God? How does being a member of the Kingdom of God affect all aspects of our lives?

Because the thing is, by their asking the question about whether to pay the tax to Caesar or not the opponents of Jesus revealed something more about themselves. You see, by their choosing to have the coins with Caesar on it, they had chosen to be a part of the empire. They were utilizing the form of currency of their oppressors. So even though they complained about being “occupied”; Even though they hated the Romans – looked to be freed from them – by that very act they had already compromised their identity as God’s people by buying into the Roman economy. Obviously they didn’t hate Rome as much as they thought they did. It wasn’t great, but they had gotten somewhat comfortable and made the best of the situation.

Both the Old and New testaments talk about the need for us to be detached from the things, the structures, the institutions of this world, recognizing where our true citizenship lies. That we are to live as members of the Kingdom of God. Jesus points out in His clever response to their questioning that if we chose to engage the things of this world – we’re free to do so – but then we have obligations and responsibilities to them. We can’t then try to turn it around and claim that with God the Father as our true King, that we don’t have to fulfill these earthly obligations that we’ve entered into. And that doesn’t exclude us from our ultimate responsibilities to God. The Ten Commandments don’t come second to The Constitution. The call to “tithe” our time, talent and treasure to God doesn’t disappear because our expenses (or our desires for things) cost more. My obligation to worship God on Sunday isn’t mitigated because I want to be in a club or because I put off my homework all week or because the Giants are on Sunday Night (and I slept too late to make Mass in the morning, or Saturday night) and then say “I just can’t make it this week”

True, our loving Father is merciful, loving, forgiving. But the Gospel underscores the reality that we’re only fooling ourselves when we get into these types of debates. God must always come first in our lives. In Jesus telling us to “Repay to Caesar what belongs to Caesar and to God what belongs to God” – is a nicer way of saying we need to stop trying to use God as an out when it’s convenient and recognize that to love Him is to serve Him – whether its convenient or not.