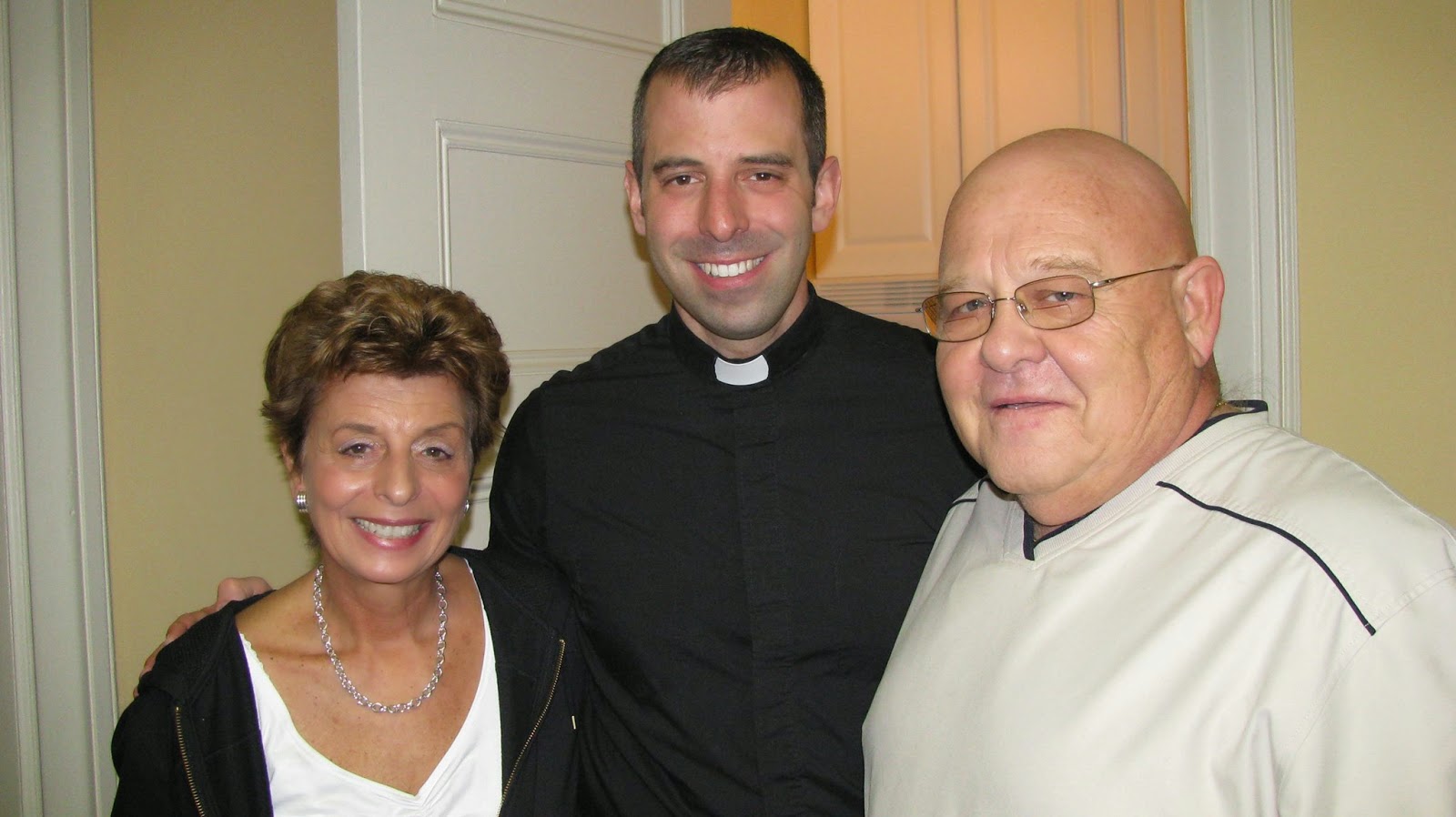 I have to admit, that wasn’t much up for debate.  My parents and I were just together – not 5 days earlier – with one of my brothers, Chris; my sister in law Mairead; and my beautiful nieces Lizzie, Gracie and Molly – to celebrate one of my best friends, Fr. Bill Sheridan’s anniversary marking his 25th Ordination to the Priesthood.  That was Sunday, October 5.  To preside at his funeral Friday October 10th didn’t make sense in my head.  And I am so glad that my good friend Msgr. Ronald Rozniak could offer such a beautiful, hopefilled homily that was of comfort to my family and I last week.  If I had been able to speak from the heart at his funeral, I probably would’ve gone back to that last Sunday –

Dad was so happy.  The sight of his granddaughters running up to him in the lobby of the Church with their usual “Pop Pop!” after such a joyful celebration just filled him with such happiness.  He bumped into some old friends he hadn’t seen in awhile.  Everyone told him how good he looked – and he was good.  Even that afternoon talking to my brother Craig on the phone about the afternoon, I summarized saying “Dad’s been doing so great the last few months…”

He’d had so many health crises over the years – times where we feared the worst – but came through it.  Not without his share of ongoing pain, struggles and difficulties – but he came through it.  Mom worked over and above what any of us ever really knew in caring for him, keeping tabs on his diet, fighting with him to keep doctors appointments, even pushing him not to give into his illnesses.

And that’s the jarring thing – the last 6 months he seemed to have finally found his rhythm.  The diabetes with its debilitating effects physically and emotionally on it’s victims seemed to be under control.  Dad had been able to take some weight off and was beginning to get around more and more.  He was more like his old self than he had been in years – and consistently.

My time this summer down the shore with my parents was so good… no one was ill, we had really great conversations.  When I had gotten back from a pilgrimage to Rome, Orvietto and Assisi, I came down the shore for a couple of days.  I had a terrible cold, it rained that whole weekend I got there – but it was such a beautiful few days.  We weren’t running to the beach or out somewhere.  We just sat together.  I was showing Mom and Dad – pictures on my iPad from the trip.  My Dad, the architect – and proud Italian – just kept looking at the pictures, asking all kinds of questions about each shot and was so happy that I got to go there.  We talked about whether he and my Mom could handle a pilgrimage themselves this coming Spring.  I knew how torn he was – his heart so desired to be there – but he was worried that some of those old health issues might pop up again and wondered whether he could handle all that walking.  Which is one reason he had started taken up walking around the block again.  He was doing so well – my only question a couple of weeks ago was whether he would be up for the trip or not — not whether he would be here or not…

I wish I could recall my exact conversation with Dad from last Sunday.  But to be honest, it’s really not important.  My exact memory was that he was happy.  I gave him a kiss when I finally got to the reception.  My 2 year old niece was trying to knock me over… we were having random conversations with everyone.  It was a great afternoon.  As the afternoon went on… and everyone was mingling with one another, we waited on line together to congratulate Fr. Bill on his 25th Anniversary.  My brother and sister in law had to leave as the youngest of the nieces was ready for a nap.  The crowd started to thin out and I looking at the clock started thinking about my responsibilities back at Montclair State.

As I said goodbye to my parents my mother said “George, just stay here, I’ll go get the car” (since they had to park at a bit of a distance from the auditorium) I gave them both a kiss.  The last image I have is seeing my dad sitting near the door with a smile on his face waiting for Mom to pick him up.  I was about to go over and sit and wait with him when a couple of parishioners came up to me and started to talk about something. The next time I looked he was gone – for what I had assumed at the time was just for the rest of the afternoon.  Mom had emailed me that night “It was a lovely celebration today for Bill….so glad we were all a part of it and are part of his life” Mom would tell me later how driving home he said how blessed they were “we have three great sons, a beautiful daughter in law, three wonderful granddaughters…”

I’m in tears typing all of this right now.  But I am profoundly grateful.  Because I know Dad died happy.

Two years ago before his open-heart surgery, I remember sitting with him and offering him the Anointing of the Sick.  It was the first time I ever remember my Dad crying.  And I remember sitting with him trying to console him – the first time I ever remember doing that either.  He was scared.  He didn’t think he would survive the surgery.  He didn’t think he could go through all of that  – again- but, with the birth of his 3rd granddaughter, he really wanted to.  And in my heart of hearts, I remember saying, and believing “Dad, you’re going to be okay…”  The doctor was optimistic.  And for whatever reason, in my heart of hearts, I never seriously considered he wasn’t going to be okay- even though he didn’t think so.

That he should just slip away so quickly and suddenly has left me simply shocked.  Like I’ve said to the students here at MSU – I don’t know how I’m feeling right now… I don’t know what I need, or what people can do for me (although I’m touched and grateful for the offers and especially for all the prayers)

All I know is it hurts.
A lot.
It hurts thinking back to sights, sounds, and experiences the day he died.  It hurts seeing the hurt of my mother – married 49 years and knowing my father since she was 15 years old so heart-broken, knowing that despite all of my brothers and I desire to heal that, there’s no cure or remedy we can offer for that.

I’m sharing all this just to give everyone a sense of where we’re at right now.  I wasn’t quite ready to discover news of my Father’s death had traveled on Facebook before my brothers and I had an opportunity to reach out to all of our family.  That as jarring as well.  But I know that there’s many students and friends and family and alumni that I’m only able to really stay connected with here online, that I thought that perhaps I should share all of this.

In this facebook/social-media world we live in – we’re accustomed to moving along with whatever’s “trending” either on a global level (Ebola) or even locally (Montclair State Homecoming).  As anyone who has gone through a tremendous loss knows – in so many ways, your world just stops.  You know you have to go on, and you will go on – but you don’t know how and you know it will never quite the same.  I’ve found myself trying to jump back into things and then crashing – driving home – trying to anticipate upcoming events, etc.  And it’s chaotic in my mind.

So quite simply I want to thank all of those who have been there for my Mom, my brothers, my sister-in Law and niece’s – my great Aunt and I during this tremendously sad time for all of us.  Just looking at the pile of Mass cards and expressions of sympathy is comforting and overwhelming at the same time.

I ask that you continue to keep us in your prayers.  My Mom, Dad and I shared a devotion to St. Joseph.  And one of his titles is “Patron of a Happy Death” (owing to the tradition that he would’ve died in the company of Jesus and Mary) I have no doubt that Dad definitely benefitted from his intercession.  And I’m grateful to the Lord for that gift.  Right now, I ask St. Joseph who was also protector of the Holy Family to intercede to the Lord to bless my Mom and all of us with His strength and consolation to endure our pain and to renew our confidence in His promises of eternal life which my Dad now enjoys and which we all hope to be reunited with him some day.

With Much Love – Fr. Jim