Hi everyone – thanks for stopping by on your surfing the web.  Here’s my homily for the 27th Sunday in Ordinary Time – OCTOBER 5, 2014.  The readings can be found at:  http://usccb.org/bible/readings/100514.cfm.  I’m grateful for you’re reading, commenting and sharing this blog with others.  Have a great week – God Bless – Fr Jim

TO LISTEN TO AN AUDIO OF THE ENTIRE MASS: 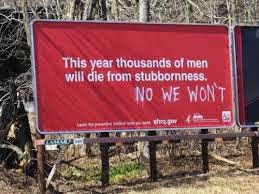 About a week ago at dinner, some students were trying to explain to me “Snapchat” – one of the latest social-media obsessions. I determined pretty quickly two things. 1 – that no, I will never get that – there doesn’t seem to be anything good that can come from that and 2 – if I were in college right now I don’t think I’d be able to get anything done.  I mean I’ve battled with ADD even before I had all these additional distractions to have my brain going down endless, mindless “virtual” rabbit holes.  I can’t imagine trying to study or get papers done nowadays.  It takes a lot of energy for me to resist clicking that link that has some random topic – “Interesting uses for Coffee grinds” – hmm… that seems important – and waste another 10 minutes with that when all I was intending and planning to do was respond to someone’s message on facebook.  Rarely am I successful at that (Did you know you can put coffee grinds in your refrigerator to neutralize odors from foods?)

Fortunately, those random posts turn out to be helpful at times- like when I’m writing a homily (ha!) A couple of months ago, someone had shared a post of the 10 most stubborn people ever.  I have no idea why I found that of interest.  Perhaps to make sure I didn’t make the list.  Or who were the experts who made the determinations of who made their list.  But there I was reading it.  I’ll spare you the full list and give you 5 of the top ten:
#5 – Hirro Ononda – Remember that kid down the street who kept playing hide-and-seek for 20 minutes after you had given up looking for him and ended the game?  Hirroo Ononda was that guy, only he kept hiding in the jungle of the Phillippines, for 30 years stubbornly refusing to believe that World War II had ended.  His family would plead to him to give it up, Japanese officials tried to reason with him – nothing worked until 1974 when one of his former commanders had to be flown in and announced to him in person that he was reversing his 1945 orders to stay behind and spy on American troops. 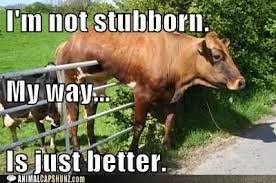 #4 – Emmett Pearson – it’s one thing to be a sports fan, but this guy takes the cake.  This Minnesota Vikings fan was so angered when his team lost to the Pittsburgh Steelers in 1975 (after making it to the big game for the third time in five years and losing each of those times) that he vowed he would not shave again until they finally won the championship. As football fans know – in the 39 years since, that still hasn’t happened. Despite his wife’s hating his beard all these years, he refused to consider shaving.  He was even refusing to have surgery on an artery in his neck a few years back until the doctors promised not to shave the beard.  Sadly Pearson died in 2013 – his stubborn ability not to shave outlasting the Vikings stubborn inability to win the Super Bowl.

#s 3 & 2 – How many cars would need to crash through your house before you would decide you needed to move?  Well for Tim and Leigh McCall, who lived in a home for 30 years, raised their son in that house, and claimed to have made numerous improvements that are so near and dear to them – 11 cars crashing into their home isn’t enough to make them want to move — It seems that their house is a block away from a railroad track that is raised – that unfortunately if a car is speeding, it sends them airborne right through their walls.

#1 – Harry Randall Truman – Back in 1980, officials in Washington State began evacuating for weeks the surrounding region of Mount St Helens as it was clear that the volcano was about to errupt.  Despite the warnings, he refused to budge saying to reporters that people were acting like wimps and “the mountain is over a mile away… that mountain ain’t going to hurt me.”   Unfortunately he learned too late that wasn’t true when 800 degree liquid rock and 1000 lb boulders rained down when the volcano errupted! 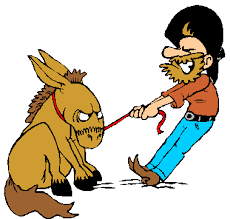 Hearing stories like that – its amazing to see that people could be that thick-headed. Ignore warnings. Forgo advice. Be that obstinate and get that entrenched in their ways of thinking.  And even sadder is to see that in it’s extreme form -not embarrassment, not pride, not personal safety – not even their very life -  is enough of a motivation to make a person open their mind and their heart to the different messages that are being presented to them. Perhaps you know someone like that. I wonder what makes them so stubborn?
Today’s Gospel reading is giving us another example of this.   Jesus is dealing with a similarly stubborn group of people. It’s seems like it’s been weeks we’ve been hearing parables, hasn’t it?   It’s one of Jesus’ favorite ways of teaching… using a variety of examples and illustrations to get his hearers to recognize who He truly is – the Son of God – and the gift that He is offering them – eternal life - which can be theirs, and ours by accepting Him, listening to Him, following Him and His commands.  Recognizing in Jesus the fullness of all that the prophets who had gone before Him for centuries, from Moses to this moment.  Seeing how God had been working through all those prophets for all those centuries to reach out to them, the people of Israel to re-establish friendship with Him.  Sometimes they listened.  Often times they stubbornly turned away from those prophets message, believing they knew better.

In this encounter, Jesus is dealing with the chief priests, the elders – the experts of the Jewish people – the ones who knew chapter and verse (literally) all about the prophets, all about the people of Israel. You would think they would be the first in line to follow Jesus and learn. They should be the ones who would be the most perceptive, the most observant and the most open to receiving the long-awaited Messiah. But a huge wall got in their way. They are blind, reluctant, resistant and absolute stubbornness to accepting Jesus. They were so stuck in their way of thinking that sadly it seems that no miracle that Jesus had performed, no preaching Jesus had made – no gift of love, of mercy, of compassion on His part is able to break through that stubbornness. Their hearts were hardened.

Jesus isn’t trying to win a debate or embarrass these leaders.  By using a parable (instead of just saying “hey guys, keep it up, don’t mend your ways and ‘enjoy hell’) he’s trying to demonstrate just the absurdity of their situation. Just on the surface, when we hear how in this story the landowner is rightfully owed and entitled to this vintage and those he sends to collect are killed - that’s diabolical. That’s insanely evil. On our human justice level – they don’t deserve a second or third or fourth chance (which according to this story they received) Italian-Sopranos style justice, this would’ve ended a lot sooner and a lot less compassionately! Yet, the landowner takes the seemingly just-as-insane risk of after all that sending his son to the tenants to collect what is rightfully his – and the son meets with the same brutal end as those who came before him.
The original hearers understood what was being said. They agree that in the story – that’s incredibly unjust. They even know that Jesus is applying the parable to them.  Despite all the explanations, exhortations and warnings – they refuse to believe. After all His miracles and words, Jesus will have no other choice but to humbly accept His Cross, an unjust sentence of death, a cruel and brutal passion – and He will not fight back or resist it, all out of His eternal Hope that His total love, total self-giving, total forgiveness will finally break the stubbornness of their hearts and minds.

The parable is meant for us as well.  We need to consider how our own stubbornness – in our pride, our ego – sometimes allows ourselves to forget all that we’ve received from God – and whether we’re truly utilizing those gifts to glorify Him or glorify ourselves. What walls have been put up that keep our stubborn behavior in tact? We are being warned to look at relationships that need to change – is someone a bad influence on me – am I a bad influence on them – or is it even lukewarm: where there’s nothing good or bad coming about from this relationship. What about our relationship with God? Is that something we are investing in or is it something we just take for granted.

We are being invited to look at the opportunities, the possibilities that Jesus is inviting us to be a part of – both here and now in the short term, and even more calls for our life, vocations – where we dedicate to serving Him in a particular way by our entire life – relationships, work, commitments.  The fruit of our labor is for the owner of the vineyard … God. If we are not offering it for His glory, what are we doing with it? Maybe we have missed those opportunities to give God what He so deserves. What will we choose today, and the day after that?

As stubborn as we can be in resisting looking at those things, Thankfully Jesus is equally stubborn! He is gently and patiently constantly offering us opportunities to take what he offers and make a real change. What has Jesus offered you this past week? What is your response? Give Jesus a chance to show you how to live a life of abundance for His kingdom.