Hello everyone.  Hard to believe that today is the last day of our pilgrimage.  The day started relatively early with us arriving at the Vatican at 7 am for 7:15 Mass at the Tomb of St. Pope John Paul II.  This has the third time I’ve been blessed to have this opportunity, and it never gets old.  Walking into the Sacristy of St. Peter’s, getting vested for Mass back there and then arriving at this altar where the only Pope I really remember from my Childhood all the way through my early years as a priest is burried – now a Canonized Saint…

I don’t know how to explain how amazingly special that is.  And how overwhelming it is as well.  But when you see St. Peter’s – that’s the whole point of this Basilica – for the building itself to draw you in, and you to lose yourself in the immensity of the beauty remembering the immensity of God’s love and mercy for us. 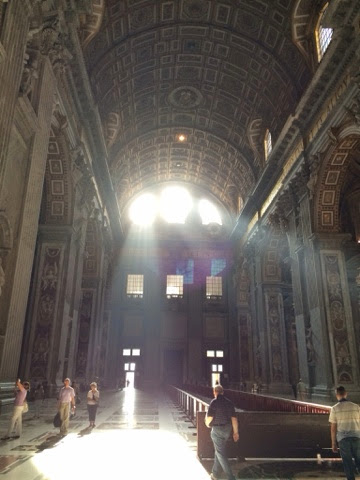 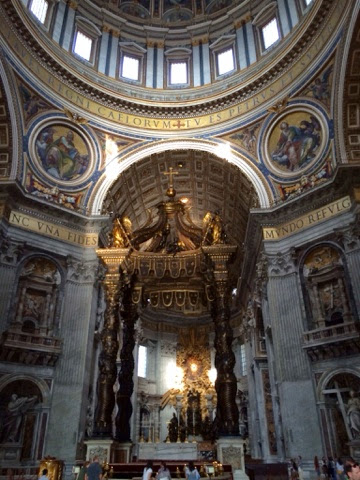 Here is my homily from today’s Mass – the Feast of St. James the Apostle.  The Readings:  http://usccb.org/bible/readings/072514.cfm 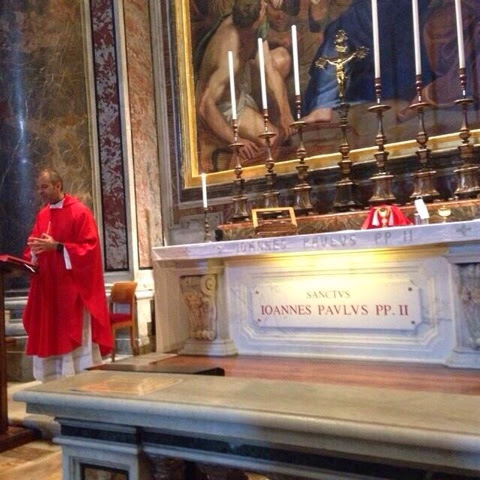 That is what is at the core of today’s Gospel – we hear one of Jesus most urgent desires of His Apostles – His Followers, of all who preach and speak in His name. That the witness of their lives would not be diminshed or undermined by looking for places of honor or prestige, but that they would be men of humility – who’s primary, singular focus is what we talked about our first day of Pilgrimage – Jesus Christ – and Him alone. That they would serve Him,

they would Love Him
by Serving and Loving those He puts into their lives. St. James who’s feast we celebrate today (and his thunder brother John) hadn’t quite gotten that message yet as they put their Mom up to asking for positions of honor.

And sadly, we can point to all kinds of examples we’ve seen or heard or experienced in the Church that would be similarly disappointing.  The complete opposite of what Jesus is calling them to.

Yet rather than dwell on that, we are blessed in countless ways.  Blessed first and foremost to have had such an amazingly beautiful week here in Rome and Assisi on this Pilgrimage to have opportunities to meet Jesus Christ in a new and different way as we’ve travelled place to place which we will share and discuss later. But Blessed even more as a Church.

Because as we celebrate this Mass here at the tomb of now St. John Paul II – one of the beautiful things thinking back on his Papacy was his humility. Through each stage of his papacy, he was constantly pouring out his life for the Church. An attempted Assassins bullet out on that square couldn’t stop him physically or spiritually – it made him in some ways even stronger in his example and witness. As Parkinsons and illnesses slowed him down, which in a world fixated on youth, exterior looks, “beauty” he didn’t hide the physical toll that he suffered.  Rather, he shared his suffering, reminding us that those who are sick and suffering have human dignity & deserve care and compassion – not rejection and isolation.  And there are countless other examples of how he didn’t stop serving until the Lord called him home.  Which is why both Pope Benedict and Pope Francis expedited John Paul II’s canonization process.
But we see how the hopes of Christ for those who would lead His Church would follow this Gospel mandate has continued with John Paul’s successors.  Pope Francis has been loved the world over in no small measure because of his dramatic acts of humility.   If anything saddens me is how some people who love Pope Francis miss how amazingly humble Benedict was – in a different way – quite simply, it’s unheard of in our day and age for people in positions of power, authority to simply resign. Yet the gentle Benedict in such an unprecedented way simply said he believed in his heart and soul that the Lord was asking him to make such a bold move. Were it not for that boldness, there would not have been a Pope Francis.  And in all these papacies, we see how the Holy Spirit is continuing to renew the Church and do amazing things throughout the world in ways we could never have imagined.  Because it’s The Lord doing the work, and these men have been attentive and guided by Him rather than their own agendas or plans – which is what humility is all about.

As we gather for this our last Mass together at this special place, first we should ask the Lord’s continued blessings on Pope’s Francis and Benedict – that their examples and witnesses will continue to be absorbed and imitated by all called to leadership in the Church… Examples and witnesses of truly being servants of Christ and servants to Christ’s people, the Church – and the world.

But may we also ask for St. Pope John Paul II intercession for each of us.